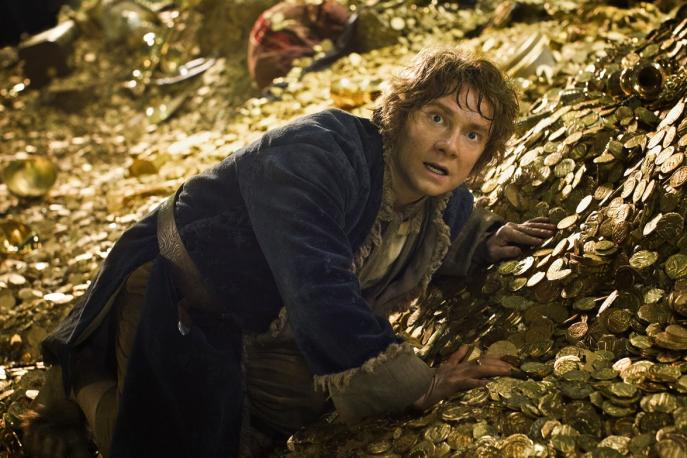 There are two scenes in The Hobbit: The Desolation of Smaug that in essence tell us all we need to know about the film. One comes within the first few frames: director Peter Jackson does his best Hitchcock impression with a not-too-subtle cameo, glibly staring down the lens of the camera as he walks across the screen. Playful, but completely unrelated to the story.

The other is the final shot of the film, in which one of the main characters stares into the distance, troubled. He laments, ‘What have we done?’ Tension, regret and pain are evident, but abundantly clear is that this film is merely a mid-point in The Hobbit trilogy. Thorin Oakenshield and his company have experienced so much up to this point, and yet much more is still to come. But we have to wait another year.

For lovers of Tolkien’s writing and Jackson’s cinematic interpretations of it, these things bring excitement and glee. Leaving the cinema nearly six hours into this epic story, knowing that there is still so much to come, might well feel like a seasonal gift for some. For others, though, there could be a niggling sense that absolute power has corrupted Jackson.

There is no doubt that this is fantasy filmmaking at its height, especially on a technical level. The closing credits of the first two films of this trilogy combined run to nearly 30 minutes. Jackson and his team are well-known for pushing the boundaries: this trilogy has been made at a higher frame rate than any other film previously, giving the 3D experience detail that makes your head spin.

Also evident, especially in this second film, is the influence of the visionary Guillermo del Toro. Originally slated to direct these films himself, del Toro’s trademark creativity is splashed throughout the story, most vibrantly in the design of the darker characters. It is perhaps also his guiding hand that makes this without doubt the most decapitation-heavy 12A-rated film you are ever likely to see.

To that end, the battle sequences are impressive, if not completely manic. Be under no illusion, though: there is brutal and violent core to this film. Sometimes in a film series, heightened violence is a hint that the tone is about to darken (for example in the Harry Potter series). Here, though, it just feels as if the horror-film pasts of del Toro and Jackson are, much to the directors’ own glee no doubt, bubbling back to the surface.

The deeper themes of good versus evil, of greed and the simple life, and of journeying to find yourself are bulging throughout this instalment. Judaeo-Christian stories and values are evident without having to dig too deep. There are also moments of wry humour and of burgeoning romance. There is very nearly something for everyone.

And yet, it is difficult to escape the feeling that perhaps the members of the massive production team are having so much fun in this world that they so clearly love, that they have forgotten some simple filmmaking rules.

The story feels stretched to its limits in order to garner a trilogy from source material never intended to bear the weight of three-hour-a-piece blockbusters. For example, new characters introduced in this film (especially Evangeline Lilly’s Tauriel) are given intense exposition scenes that feel drawn out merely to bulk the minute-count. The whole discussion of the political leanings of Laketown seems to serve no purpose other than to entice Stephen Fry into a cameo appearance. Maybe that will all change in the final film of this trilogy, when we expect everything to come into sharper focus.

But that is exactly the most frustrating thing about The Desolation of Smaug; there is always a sense that no matter how much is packed into this film, the viewer will still have to wait for the final film for complete satisfaction. And even then, the viewer likely knows all about The Lord of the Rings. This means that creating tension is a problem across The Hobbit trilogy: how worried can you be for Bilbo during the various battle scenes when you know that he has to make it home safely in order to write the book? How can we feel scared for Gandalf in his confrontation with the Necromancer when we know he has got a massive part to play in the future? How many times can the dwarves go into battle just to come out again unscathed? Again, this raises the question of the need to make this into a trilogy in the first place.

Just as Jackson nigh-on winks at the camera in the first moment of the film, it feels as if the rest of this film is the director doing just the same, almost showing off what he can do on a technical level. Perhaps Jackson can see something of himself in Smaug, the massive dragon slumbering under the weight of his own fortune. Just as Smaug sleeps snugly amid coins and treasure, Jackson serenades his audience with superfluous, self-satisfied action and exposition. Smaug is eventually awakened, and bursts into fiery life; however, it feels as if the viewer must wait another calendar year before getting the explosive finale they desperately crave.