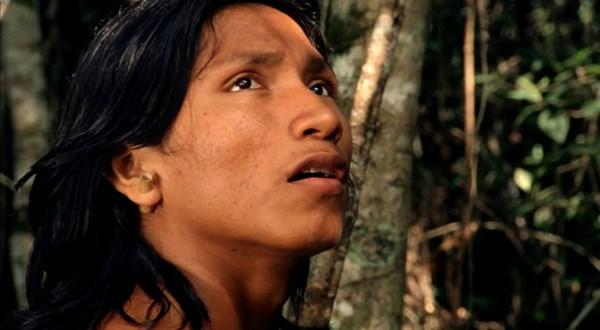 ‘The trouble with shamans is that they’re unreliable.’ Four elderly men are sitting around a fire at night, discussing the shortcomings of their spiritual and medical leaders. They agree that a good shaman can be a real blessing to a community, healing the sick when all other remedies have failed. But a bad shaman can put a curse on their enemies, the kind of curse that is really difficult to track down and remove. Indeed, shamans have been killed because they were suspected of evil-doing of this kind. On the whole, the men agree, shamans are best avoided.

These men are Amerindians, members of the Krahô tribe, living in the forests of the Brazilian savannah. The first half of The Dead and the Others follows the daily life of a Krahô village. The film features the actual villagers, playing lightly fictionalised versions of themselves. At its centre is Ihjãc, a young man with a wife and new baby. His father has recently died. One day, alone in the forest, he hears his father’s voice. He is asked to prepare a funeral feast, that will both allow the village to bring the formal mourning for Ihjãc’s father to an end and permit the spirit of the dead man to pass on to the village of the dead.

One strand of the film then follows the preparations for this feast. A special crop of the Krahô’s  staple food must be grown, and this in turn means clearing an area of scrub in which to cultivate the plants. A decorated log must be prepared, to represent the father as the centre-piece of the celebration. The whole village is involved in these preparations. It is, we are given to understand, what the Krahô are good at. Their ability to celebrate all aspects of their lives led an anthropologist in the 1980s to call them ‘the beatniks of the savannah’.

The second main story in the film, though, focuses on Ihjãc himself. Hs ability to hear his dead father confirms his conviction that he is being called to be a shaman. His guardian spirit, the macaw, demands this of him. This, though, is not a welcome vocation. Sharing the view of the camp-fire elders, Ihjãc would rather stay as he is. An ordinary villager, father of a young family, he has no wish to draw down upon himself the isolation from, and suspicion of, his neighbours.

So, like Jonah in the old Testament, Ihjãc tries to run away from his call. He flees to the ‘big city’, actually a small-to-medium town a lorry-ride away from his village. He asks a doctor trained in Western medicine to cure the aches and pains that the macaw is inflicting on him for avoiding the call. The doctor, though, seems to have little time for the people of the forest, and accuses him of malingering. After a few days living rough on the streets, Ihjãc returns to his village, in time for his father’s funeral feast. The end of the film suggests that he has accepted his fate, and will, albeit reluctantly, recognise and use his shamanic gifts.

The directors of the film, João Salaviza and Renée Nader Messora, spent nine months living in the Krahô village that is at its heart. It is a place in transition. Its people are in some ways living as they have for centuries, in huts in forest clearings, hunting and growing the crops they need. But they wear Western football shorts, and tee-shirts with slogans for special occasions. Although the viewer sees little technology in the first hour of the film, Ihjãc is able to phone the village from the city. And during his brief stay in the hospital, he shows that he is adept at computer games. These are people attempting to assimilate Western ways on their own terms, adapting what they see as good for them while retaining much of their own tradition.

The process of making the film was itself interesting. The two directors were accompanied only by a cameraman and an assistant. The Krahô themselves had a large say in determining the story-lines, and what they were and were not prepared to have shown. According to the directors, they regarded the film-making as play. On the whole, they were happy to go along with it, but if something more important, like a hunting expedition, intervened, the shooting schedule for that day would simply be abandoned. When a screening of the finished film was arranged in the village – which has now had an electricity supply for the last year – they spent the whole time laughing at their own strange antics.

The Dead and the Others casts an unjudgmental eye over a very different culture. It accepts it on its own terms, not, for instance, evaluating shamanism, but asking what it would be like to experience growing shamanic gifts in that setting. How should a tribe, who are simultaneously near and far from mainstream Brazilian society, react? Is it possible to accept the best of both worlds? At the end of the Q&A session after the film had its London premiere, we were told that the forthcoming elections in Brazil are likely to result in a government unfavourable to the forest people and their rights. Does this matter? Viewing this film would certainly help towards answering that question.