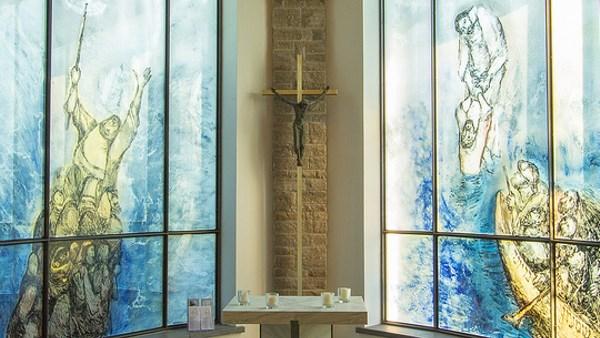 A much-admired and influential artist and Catholic priest died in Germany earlier this week.  Gemma Simmonds CJ pays tribute to Fr Sieger Köder, whose distinctive painting was an expression of his pastoral ministry and his commitment to the social gospel.

The German priest-painter Sieger Köder has died in Ellwangen, Germany, on 9 February 2015, shortly after his 90th birthday.  Born in Wasseralfingen in Swabia, Köder was a prisoner of war during World War II and also participated in the Catholic Neudeutschland movement.  He trained as a silversmith and painter and worked for some years as a secondary school art teacher.  At the age of 41 he went to study theology in Tübingen and was ordained a priest in 1971.  He combined his vocation as a parish priest with his work as an artist, producing numerous paintings, altarpieces and stained glass windows for churches within and outside Germany.  He continued painting long into his retirement, decorating the St. James Pilgrim House in Hohenberg with a series of remarkable external murals and setting up eleven stations on the Franconian-Swabian Camino route to Santiago de Compostela.

Köder’s work shows the artistic influence of Chagall and is distinctive for its strong colours and robust, chunky figures.  They express a distinctively earthy theological and spiritual interpretation of biblical and abstract themes, and a warm, inclusive ecclesiology, very much in line with that of Pope Francis.  There is challenge, anger, humour and deep tenderness in his depictions of biblical scenes, and always an eye for the human response to God’s communication.  Köder’s painting is the visual expression of a lifetime of preaching and of sacramental and pastoral ministry.  He shows the cost of discipleship in the prophets and judges of the Old Testament, and in those who met Jesus in the gospels; but he also shows the full range of personal responses to Jesus in the features and body language of minor figures in the crowd.  Most famously he painted a fresco of the Last Supper for the German College in Rome, which trains future priests for his home country.  The scene includes, sitting at the table of the Eucharist, a Jew, a beggar, a prostitute and a wounded African ‘guest worker’ in the striped pyjamas of the Nazi Holocaust.  One of the most distinctive motifs in Köder’s biblical paintings is the reflection of the face of Christ.  His depictions of the Washing of the Feet, the Samaritan Woman and the Last Supper show Christ’s face reflected in the bowl of water, the well and the cup of wine, respectively. The picture of Veronica has the imprint of Christ’s face on a cloth held above two starving black arms with a begging bowl, and Simon of Cyrene’s face is a mirror image of that of the suffering Christ, with whom he is shown arm in arm.  The message of the social gospel of the immediate post-conciliar period is never absent from his paintings.

Another leitmotiv of Köder’s is the harlequin or clown.  Christ or his disciples are sometimes depicted as clowns, but the recurring motif is also an indication of the freedom from rules, rationality and rigidity and the unruliness of the inner life, of human instinctiveness and the longing for artistic expression.  In a 2009 interview, he said: ‘I hope I can preach with each painting, not just make pictures.  I want people to look at the pictures, of course, but if the message of my deepest motivation for painting comes across, then I hope that the message of the Gospel comes with it as well’.

Köder’s wartime experiences profoundly influenced his depictions of the Passion of Christ and human suffering and evil. This can be seen particularly in his Stations of the Cross and his Misereor Hunger Cloth.  In later life Köder’s work became world famous and he won many awards, including, in 1985, the honorary title of Monsignor and the Order of Merit from Pope John Paul II.  He was a deeply modest man and found those who came to see ‘the great artist’ a trial.  In a newspaper interview he once remarked, ‘People come to Ellwangen asking to see the painter.  If they’re that interested in the painter, then they haven’t understood the paintings’.  His works have inspired countless reproductions, books of meditations and posters and a fully illustrated Bible.

May he rest in peace.

Gemma Simmonds CJ is the author of two books on Fr Sieder Köder: The Closeness of God and Glimpses of the Divine. Both publications, and more resources about Fr Köder’s work, are available via Pauline Books and Media.

Painted spaces: Art for a Covid-Advent. 2. ‘The Annunciation’ by Fra Angelico