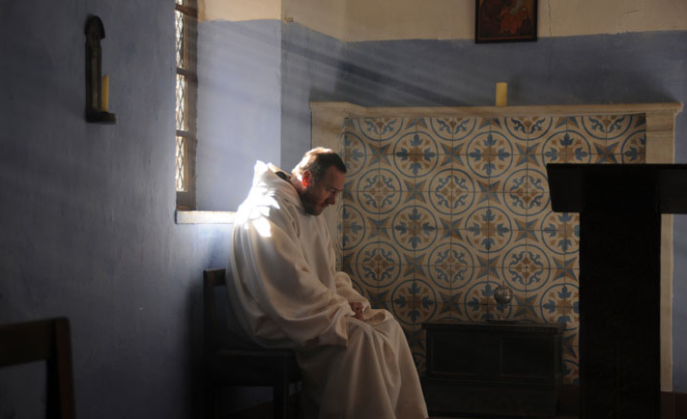 
Although it strikes right at the heart of one of contemporary politics’ hot topics – the relationship between Islam and post-colonial Europe – Of Gods and Men avoids either sensationalism or simplistic characterisations. Even the Islam fundamentalist terrorist leader is given a compassionate hearing, demonstrating that, in spite of living and inflicting terrible violence, he is capable of a sincere and generous behaviour.

Based on the true story of a Cistercian Monastery in North Africa, Xavier Beauvois’ film examines the sharp end of contact between the Islam and Christian worlds. The daily life of the monks is revealed in loving and precise detail: the plot emerges very slowly from the round of doctoring, gardening and administration. Although Brother Christian is both leader of the eight monks and focus of the drama, all of the Brothers are developed and rounded: the various conflicts, both internal and external, are played out slowly and with nuance. Beauvois shows the simplicity and humanity of their lives, and their thorough integration into the local community. The gradual encroachment of fundamentalist revolutionaries poses challenges both to the monks and the government, and most of the film is dedicated to the monks’ brave decisions to remain working at their vocations.

Despite the tense atmosphere of violent menace, the film refuses to be graphic in its depiction of horror, concentrating on the emotional impact and the social consequences. Through its slow narrative, which gives plenty of time both to faith and crisis, the film demonstrates how the monks create an alternative structure to the corruption of the government and the violence of the revolutionaries: their engagement with Islam is sincere and passionate, their concern for the villagers moving and returned. While living out their commitment to Christ, the monks respect Islam and the values of North Africa.

As the plot emerges – it is increasingly inevitable that the monks will become victims of the revolutionaries – Beauvois refuses to hasten the pace and Caroline Champetier’s cinematography continues to focus on the subtle detail. The arrival of government troops, apparently to protect the monastery, is as threatening as the late night visit from the revolutionaries: against the slow, measured life of The Order, the frantic panic of the state is exposed as a desperate response as deadly as the threat they hope to counter. And while their policies have little impact on the daily life of the community, their opinions are clearly framed more by expediency than principle.

Both through its gentle pace and tragic ending, Of Gods and Men is a work of tremendous compassion, that suggests that the conflict between Islam, the West, and the post-colonial states of Africa is not a simple question of different civilisations competing for power. Power itself, as the hymns of the monks, and their various readings remind the audience, is the problem: when Brother Christian reminds a Muslim revolutionary of a command within the Koran, he is briefly recalled to his better nature. Even though this then leads to state accusations of ‘sympathy’ to the terrorists, the community refuse to be swayed. Their brave refusal to bow to political pressure, or even personal safety, may lead to their deaths. It is, however, a bracing statement of faith in the worth of a life outside of political concerns.