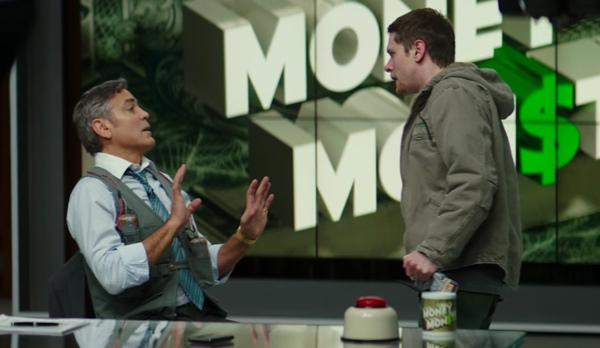 ‘It’s about what happens to real people when these financial crises play out’[i] – that’s why Mark Kermode was a fan of the 2014 drama 99 Homes, which looked at the winners and losers in the faltering Florida real estate market in 2010. It’s the kind of comment that Jodie Foster was probably hoping would be made about Money Monster, but the film lands wide of that mark.

In 98 minutes of real-time action, we see what happens when incensed young investor Kyle Budwell (Jack O’Connell) hijacks a TV studio during the live broadcast of the programme from which he took the ill-advised tip that bankrupted him. With a gun to the head of the host, Lee Gates (George Clooney), Kyle demands acknowledgements of responsibility for his misfortune from Gates and from the head of the fund whose portfolio collapsed to the tune of $800 million. And just in case anyone doubts the extent of his fury, Kyle has strapped a vest loaded with Semtex to Gates’s chest, the detonation of which he will trigger if he doesn’t get what he wants. Julia Roberts as Gates’s director, Patty, is a voice in the host’s ear during the events that ensue, trying to negotiate a safe outcome – and get to the truth – by appeasing Kyle’s demands.

Kyle wants an answer to the question of how his investment went so badly wrong, and wants to know why the people who are paying the price are those at the bottom of the ladder rather than the CEOs who can’t be reached aboard their private jets or the TV hosts in their $1000 suits. He’s a mouthpiece for the frustrations of all of the millions of Davids who want to take on the financial Goliaths, and manages to manoeuvre himself into a situation where he can do just that...the problem is that this everyman, this ‘real victim’ of a financial crisis doesn’t seem all that real. Even with the electric O’Connell to bring him to life, it’s difficult to buy in fully to Kyle’s story, to imagine that this character would have resorted to this course of action. His situation is most affective when he has flickers of uncertainty, humiliation or heartbreak (all of which we see him suffer), but the credit for this lies not with the script but with O’Connell’s unparalleled ability to imbue a still exterior with the suggestion of volatility lurking just beneath the surface (see Starred Up  or ’71 for further evidence of this.)

Clooney and Roberts are both very well suited to their roles, lending a great deal of authenticity to the arcs of their characters. It’s a shame, though, that this credence doesn’t infect the plot. What was surely intended to be almost a human interest piece ends up verging on melodrama when the wrongdoing is too easily isolated. Important questions of mismanagement, complicity, diligence, ignorance and self-preservation in the end get side-lined in favour of what turns out to be a contrived and neatly tied-up storyline about corruption, with a trite and two-dimensional villain.

Kermode’s praise for 99 Homes came alongside recommendations of this year’s The Big Short and 2011’s Margin Call, both of which I would endorse: the former exposed the ludicrous fragility of the financial bubble; the latter, although its characters were all balanced on the top rungs of the ladder, was laden with suspense and all-too-real, and therefore more challenging, villainy. Money Monster takes on a little too much of the 24-hour news culture that it partly seeks to target – it’s light, entertaining and somewhat caricatured. The ‘human fingerprints’ that we hear about in the film are, disappointingly, not that human after all.