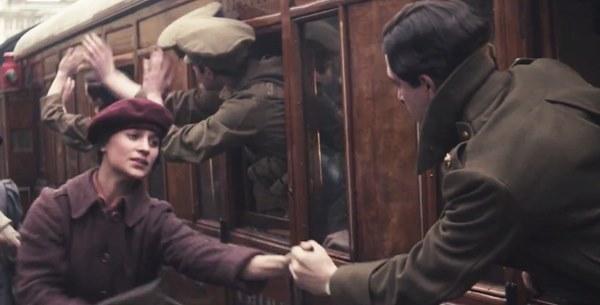 The great pacifist Bertrand Russell declared, ‘War does not determine who is right – only who is left.’ This statement resonates throughout James Kent’s wonderful film adaptation of the 600-page memoir of another famous pacifist, Vera Brittain. Testament of Youth is a unique and relevant reminder that remembering the war is not just about the dead; it is also very much about remembering those who had to bury the dead and cope with their loss, and then try to reshape their own devastated and shattered lives.

It is as one of those left at the end of the war that Vera Brittain wrote her memoir. She abandoned her original plan to write a novel because she found that the characters were too close to her, so instead she writes eloquently and movingly about her own experience: of youthful ambition and hope; of love and the abandonment of innocence; and of the harsh reality of war. Her writing seemed to be cathartic, a way for her, having suffered so much loss at such an early age, to find closure – if that were at all possible.

Her story is of a bluestocking teenager whose time at Somerville College, Oxford is cut short when her fiancé and brother are killed in the war. She abandons her studies to serve as a Voluntary Aid Detachment Nurse in London, Malta and France. Screenwriter Juliette Towhidi, who wrote Calendar Girls, does a very good job of encapsulating the spirit of Brittain’s memoir and, despite a sluggish and almost spluttering start, the film gains traction and runs smoothly, much like the trains that we see taking the youth of Britain to their death on foreign soil.

Alicia Vikander, a rising Swedish star who recently starred in Anna Karenina and A Royal Affair, is outstanding. She manages to capture the innocence of Vera’s youth, her coming-of-age experience of falling in love and her struggle to deal with an armistice that has not ended the war for her. Vikander’s Vera is feisty, committed, passionate and resolute in her principles; but above all she demonstrates a true and deep love for those who were close to her, and a responsibility for what happened to them.

The strong cast includes Game of Thrones star Kit Harrington as Vera’s teenage fiancé, Roland Leighton. He was killed early in the war, and with him died any hope that Vera had of a return to her pre-war happiness. However, it is the women in the film – and the performances of those who play them – that really catch one’s eye. From the fragility and subservience of Vera’s mother (Emily Watson) to the defiance and steely determination of the Oxford don (Miranda Richardson), they each offer a refreshing perspective on the victims of war. The experience of nurses in enduring firsthand the mess and pain of war is presented without sentiment or schmaltz: the film does not shy away from the unprecedented scale of the costs, both physical and emotional, borne by the medical profession.

Robert Hardy’s cinematography is used to great effect in a film with a relatively low budget of $10 million. The great battle scenes we might have expected of such a film are set aside in favour of close-ups which give us access to the wars of emotion being fought internally. Feelings of loss and abandonment are well-conveyed, as are the discernment processes that the characters undertake.

There is a striking use of water throughout the film: as a healer, through the sponging of torn limbs; and in the rain drops that fall on newspapers and helmets in the trenches, which are really tears of the heart. Hardy’s skill with water shapes the film admirably, and perhaps points us towards these words of Aeschylus, which capture for me the essence of the film:

He who learns must suffer

And even in our sleep pain that cannot forget

Falls drop by drop upon the heart,

And in our own despair, against our will

Comes wisdom to us by the awful grace of God.

Brittain might not agree fully with this assessment of suffering, but through her testament she nonetheless urges us to make the most of our wisdom to shape a better experience for the youth of today.