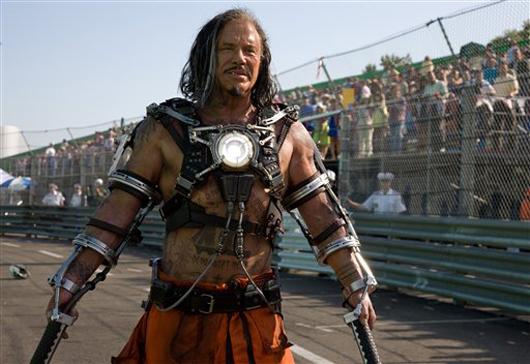 
It is always the struggle of the superhero that makes their respective comic or film worth its salt. If there were no emotional dichotomy within our heroes and heroines, we may as well pay money to watch humans drive fast cars or crush metal – so unless you’re a Jeremy Clarkson fan or a Scrapheap Challenge aficionado I think it’s safe to say most of us want our superheroes to be messed up, complex, emotional outsiders. It makes the salvation all the more satisfying that way.

Iron Man 2 re-introduces to us playboy millionaire Tony Stark (Robert Downey Jr), aka Iron Man who has recently, and casually may I add, ‘privatised world peace’ single handedly (I mean that in a literal sense). Having eradicated the threat of nuclear war he is so popular with the general public he makes Barack Obama look like a world weary Gordon Brown. However, not everything is hunky dory and, as is often the case with comic book heroes, we are shown signs of a tension lurking beneath Stark’s shiny iron veneer. Stark is under pressure from the American military who see his suit as a threatening weapon that could be copied and adopted by other ‘dangerous’ nations. Little does he know clichéd mad man Ivan Vanko (Mickey Rourke), the vengeful son of a Russian physicist, is developing his own technology in order to bring about the downfall of Iron Man, the publicly adored bastion of world peace. What’s more, Stark himself is suffering physically as the suit that once made him is slowly killing him, altering the toxicity of his blood.

Like I said, it is only really the struggle of the superhero that makes comics and films effective and not merely an excuse for computer nerds and stuntmen to go crazy with their hyper billion-polygon special effects toy. But, call me a misery guts, I just didn’t feel like Downey Jr made enough of his own pain and struggle. Ok, he had difficulties with his father but even that part of the film was too brief and glossed over. Take, for example, Christian Bale in Batman – he really could ladle on the angst, to the benefit of the film I think. I mean, if I knew my death was lurking just round the corner I like to think I wouldn’t just sit on top of a giant doughnut, hungover, skulking around like a moody toddler that has been forced to sit on the naughty step (Tony Stark does). Then at his own birthday party he realises it might be his last so he goes on a self-destructive, alcohol-fuelled, binge. But even this seemed needlessly comic. I half expected to see Iron Man drunk with a cocktail umbrella behind his ear giddily hiccupping. Yes he is flawed, but just not enough.

That is not to say Robert Downey Jr ruins the film. Rather he only flourishes in the moments when he exudes charm and charisma instead of pain and turmoil. He is indeed a good showman. Iron Man’s strength and in fact the film’s highlights come when Downey Jr is at his most exuberant, hurling around witty putdowns and quips like they too are weapons built into his armour. These moments of silver-tongued wizardry are entertaining, especially in scenes between Stark and Justin Hammer (Sam Rockwell). Hammer is Stark’s jealous rival, who with the help of Ivan Vanko seeks to use Iron Man’s technology in order to destroy the myth surrounding Stark, as well as earning a cheeky few billion dollars by selling these Iron Men to the army for military use. Then of course there’s the formulaic big fight scene at the end, which amongst all the guns and explosions involves Stark’s newfound ally Natalie Romanoff, aka Black Widow (Scarlett Johansson) taking on a compound of security guards with her bare fists. She is a remarkable addition to the film’s cast of brilliant actors, but again even Johansson and her intransient beauty do very little to bolster the murky script.

Perhaps these are all things that could be put right for Iron Man 3 (I suspect a third installment will follow). But for now fans will sadly have to settle for average. Sorry folks. More proof that $200 million doth not necessarily a masterpiece make. I suspect if I were more of a staunch comic book connoisseur my emotional allegiance to the original Marvel comic would elicit an even harsher reaction against the film. But as it is I think Iron Man 2 is weakly scripted and ultimately a flawed film – its flaw ironically being that its hero isn’t flawed enough and the actor who plays him is too flawed to bring out what flaws there are.