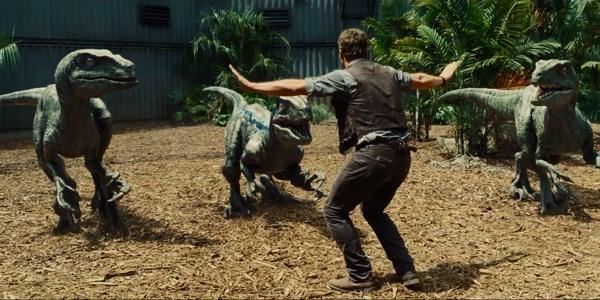 A thin crack appears in a fragile egg. There is movement within. The shell begins to split and a claw reaches out, grasping at the air of modern-day Costa Rica. Two worlds collide, yet again: primordial pre-history and contemporary capitalism; the base primitivism of dinosaurs, brought back to ferocious life for human amusement and consumption. In this scenario, creation breeds destruction, and life, death.

Thus begins the fourth film in the Jurassic Park series. But as one of the first blockbusters to be released this summer, Jurassic World marks more than just the rebooting of another, tired Hollywood franchise. This is a visceral, raw re-birth. Clinging tightly to the essence of 1993's classic original, Jurassic World retains much of what made its first predecessor so potent. There are some genuinely terrifying set-pieces, moments of real humour, and a cast that engages the audience and retains our interest.

The core story is quite simple, and is set 22 years after the late Richard Attenborough’s John Hammond tried to make Jurassic Park a reality. Moody teen Zach (Nick Robinson) is charged with looking after his ultra-geek younger sibling, Gray (Ty Simpkins), when the bickering brothers are sent off to meet their Aunt Claire (Bryce Dallas Howard) for the Christmas holidays while their parents sort out a messy divorce. Claire is a high-powered career woman, steering the titanic theme park that is Jurassic World through the corporate realm of big-money sponsorship, fluctuating visitor numbers and attractions of ever-increasing complexity. Not having much time for her nephews, Claire pawns them off on her PA and gets on with the real work of preparing the next showcase: the unveiling of an über-dinosaur, Indominus Rex.

Chris Pratt's ex-Navy raptor trainer, Owen, gets dragged into the mix as things start to go horrifically pear-shaped. Before long, the Indominus Rex has escaped its cage and is causing havoc. With 22,000 souls on the island, the race for survival is on.

Admittedly there is not much narrative innovation on show, but what transpires is executed well, with relative newcomer Colin Treverrow in the director's chair. The script is built on the solid sci-fi/action foundations laid by Rise of the Planet of the Apes writers Rick Jaffa and Amanda Silver, but Treverrow and another co-writer, Derek Connolly, bring a refreshing indie dimension to proceedings. While there are many impressive set-pieces on display, with some genuinely nerve-shredding moments, it is these independent sensibilities that are most stirring and they ensure that this is not a film that takes itself too seriously. There is a distinct sense of reading the signs of the times, and even a hint of commentary on where the Western world is heading. The saturation of corporate sponsorship is knowingly alluded to, along with the perils of unchecked, unscrupulous scientific enquiry. But what really comes to the fore is the awareness of what these things do to our humanity. As the brothers at the centre of the film struggle to contend with their impending family breakdown, there is a momentary acknowledgement that the promise of unbridled consumerism cannot stem the tide of their pain.

All the same, deep, brooding drama this is not. The audience knows what it wants, and the film delivers. There are some knowing winks to the original, which will bring smiles to the faces of those who relished that film two decades ago. The CGI of the various dinosaurs in the depths of battle bears up well under the scrutiny of IMAX. And at the centre of it all, there is a pounding, relentless story that unravels before our eyes in intense, exciting set-pieces. Jurassic World is a strong addition to the franchise, made all the stronger for doing the simple things well.