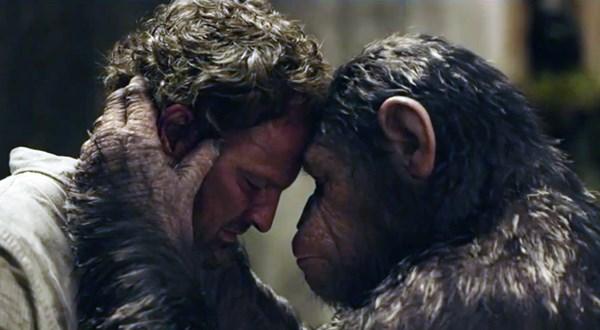 This is post-apocalypse for adults.  It is ill-suited for the immature, but not in the tawdry sense of being sexually illicit or obscenely violent (the film is quite family-friendly).  Rather, it is ill-suited in a more robust sense of clothes a size too large: its themes are things to grow into.

Whereas many films concerning the end of the world entertain an adolescent idea of revolution – that it is complete when the present powers are overthrown – Dawn of the Planet of the Apes remembers the deeper meaning of revolution, which is a coming full circle.  Its dramatic vision is not one of shaking off, as it were, the oppressive yoke of parenthood, but of growing up and taking it on.

Too often, the cataclysmic end of civilisation in fiction functions as merely a fantasy about a certain kind of freedom.  It is a freedom from constraints, from impositions, from all those annoying social antecedents which crowd our lives and seem to limit who we might become.  In our increasingly interconnected world, an epic infrastructural meltdown seems to open up a frontier for self-actualisation unimpeded by other people.  Struggling along without cable television, cruise control or air conditioning, these narratives suggest, is simply the price I pay for becoming whomever I want.

But this film suggests otherwise.  It does not present a brave new world where rugged individuals work the land in isolated self-sufficiency, but where people huddle together and form new families in the remains of crumbling cities.  The world is almost empty around them, yet they still cram together in a single building in abandoned San Francisco.  The world they knew has ended, and has brought them low enough to see something foundational: that the best sort of life, and the best sort of freedom, happens, paradoxically, amidst enduring commitment.

Interestingly, this insight is embodied most forcibly in the figure of a four-foot chimpanzee.  He is Caesar, leader of the genetically-enhanced apes who share all the characteristics of human persons such as conscience and elementary speech, and in the ten years since the closing events of Rise of the Planet of the Apes he has overseen the establishment of a veritable simian civilisation.  Its monkeys ride horses, organise hunting parties and systematically instruct their young in ethical principles, primary among them, ‘ape not kill ape’.

When a human expedition crosses the rusting Golden Gate Bridge and enters ape country, however, things get complicated.  Caesar’s son is shot, and his people clamour for war.  Yet with a glance at his nursing wife and newborn infant, he signs a silent question: ‘but how many apes will die?’  His concept of justice is not a shallow one of destroying problems, but a more fundamental one of doing what is necessary for cultivating lives.  He feels bound by his commitments to his family and to his people, and it is these, not any triumphant feats in battle, which form the substance of his heroism.  In a simple yet elegant image, it is this ape that shows a desperate humanity what it means to be a man.

Concluding on a technical note, the film is a marvel of CGI.  Although the actual graphics do not especially wow, one cannot but be impressed by their scale.  Computer-animated animals of all sorts riot continually across the screen in a sheer exuberance of integrated animation, whose entertainment value rises head and shoulders above 1970s actors crouching in gorilla suits.  The new directorship of Matt Reeves (Cloverfield) has also upped the ante – to an estimated $170 million, and it shows – in a franchise that is now standing strongly on its own back legs.