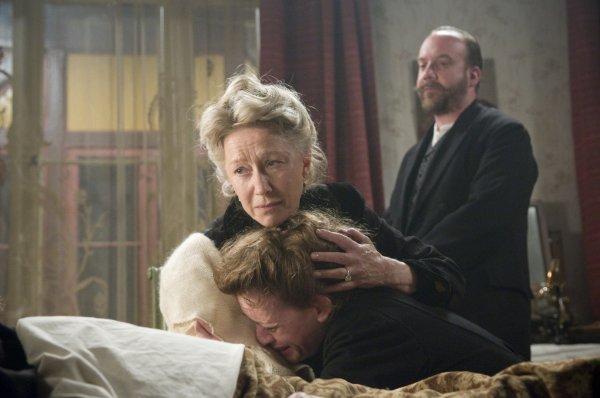 
First, an admission: I was a teenage Tolstoyan. It was Anna Karenina that did it for me. And I’m not talking about being moved by the tragic figure of Anna and her doomed love affair with Vronsky. For me the novel was all about Levin, Tolstoy’s most autobiographical of protagonists. What I liked best about his part of the story was the spirituality he discovered in the peasant life and his love story with Kitty, a character based largely on his wife Sofya. Their engagement scene has to be one of the most heart-burstingly beautiful ever written. So what became of this beautiful love story and joyous spirituality?

The Last Station is an account of the last few weeks of the life of Leo Tolstoy (Christopher Plummer), the world’s most famous novelist. Tolstoy is concerned about the good of humanity since he has become more and more religious with age. He is conflicted. Should he choose to live a life of worldly happiness in the institution of marriage with Sofya (Helen Mirren), or should he be more authentically Christian and denounce such worldly joys as the marriage bed and embrace a total, selfless love for humanity? These two opposing pulls are personified by two important people in his life, his wife Sofya and his great friend Chertkov (Paul Giamatti). The story is told through the eyes of Valentin Bulgakov (James McAvoy), Tolstoy’s new personal secretary. The conflict of Tolstoy’s last few days is also played out in Valentin, whether to live the Tolstoyan ideal or embrace his love for fellow commune member Masha (Kerry Condon).

A beautiful story with a worthy theme and a stellar cast should make a satisfying movie. But sadly it’s all wrong, and the reason for it is the treatment of the theme of Tolstoy’s spiritual conflict. It is clear that the director Hoffman only has sympathy for Sofya, our larger-than-life, slightly mad, but very lovable heroine. She fights for what is truly great in life, real romantic love, and the villainous monster Chertkhov is trying to destroy all she shares with her husband. Chertkhov speaks words of love for humanity when he is really serving his own aims, hoping for greatness on Tolstoy’s back. But why does Tolstoy care so much about Chertkhov when he does not seem to have any redeeming qualities? And why would Tolstoy throw away the real love of his life for this inane idealism? This film is so one-sided in its treatment of its main themes, one gets the sense that the makers are not really committed to the story and all it has to say. To be honest it boggles the mind to see that someone would want to take such a beautiful and heart-rending story and make it much shallower than it clearly was.

Anyone going to this film as a film enthusiast will be probably going for the first class cast, and I am sorry to see great actors so very poorly directed. McAvoy, the best young talent around, fills the not-leading-man-material-but-is-leading-man niche that is his trademark. All his kooky gestures really irk, and he fails to develop any kind of spark with Kelly Condon. Mirren and Plummer do adequate jobs as larger-than-life characters; however, their roles are so poorly written and so hard to swallow. Giamatti is playing a melodramatic villain and fails to bring about his natural charm in a role that requires it, in order to see what his friendship with Tolstoy was about.

The one-note performances are further trivialised by ridiculously light music and inane humour. The music, which can be best described as ‘whimsical’, has neither the romance nor the pathos necessary. And the jokes, well, while there was the odd great line (Tolstoy shouting to his wife ‘You don’t need a husband; you need a Greek chorus!’), the constant running gags about enemas were crude and boring.

Returning to the rotten core of the film, Hoffman just does not get faith. He does not understand why anyone would give up what he sees as real love for an idealistic sort of altruism that he sees in Christianity. Tolstoy, however, really struggled with this choice, and allowed himself to be influenced by many voices except his own. He could hardly see the value of his love for Sofya when it encouraged in himself many of his worst instincts. He genuinely wanted to end the suffering of the masses. What Tolstoy’s story tells us is that even great men can be wrong about life. He forgot the lessons that Levin learned in Anna Karenina, he could embrace his love for his wife as part of his love for God just as much as he could embrace his love for humanity. Tolstoy’s story, I feel, may be a real tragedy because he wrecked his family and the vocation which he was given by God. He misunderstood what love was. Unfortunately, this movie teaches us little because it believes it has all the answers without knowing all the facts. To twist the film’s tagline, intoxicating, infuriating, impossible, but sadly no love.