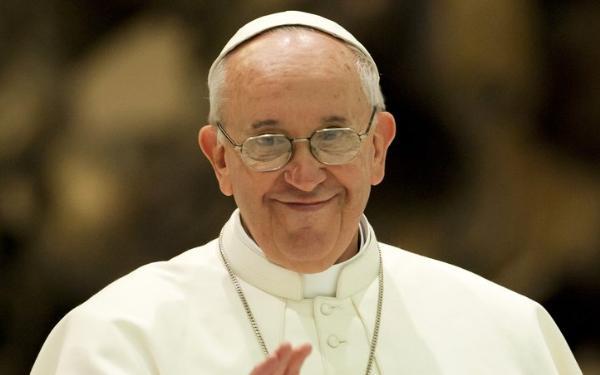 A stroke of good fortune allowed Richard Leonard SJ to be in Rome for the election of Pope Francis. He describes here the events and atmosphere in St Peter’s Square and beyond on 13 March 2013, and offers his thoughts on the beginning of a new papacy.

It is only by good luck and blessing that I found myself in Rome during these historic days. I have been booked for the last twelve months to come as a visiting professor to the Gregorian University. Perhaps Benedict XVI got wind of this and resigned, setting in motion the events of the last week.

On the morning of Tuesday 12 March, I was being interviewed by ABC TV on the roof of the Jesuit Curia, right next to St Peter’s Square, when the black smoke went up. I said to the presenter on air, ‘It’s just like so many people’s impressions of the Catholic Church – black or white!’ That gem deserves to be left on the cutting room floor. No one thought the conclave would have completed its task after three votes; most seasoned Vatican-watchers were saying it would happen on Thursday at midday.

I finished teaching at 7pm. The first clue that something was happening was the bells. As the white smoke went up, the bells at St Peter’s started ringing and, through a centuries-old tradition, the tolling cascaded from one belfry to the next. It took two minutes for the churches around the Trevi Fountain, where the Gregorian is located, to ring out the news. I guess a tweet would have been quicker, but less poetic.

At that moment, a Polish nun in full habit ran past me shouting ‘fumare bianca, fumare bianca’. Sister was excited, and all of a sudden so was I. The previous days had seen this extraordinary Catholic theatre, where 115 men talk to the world via a chimney stack; it was time for the ‘big reveal’. I now know where reality TV gets its ideas from.

There are moments in your life when the effort is worth it. St Peter’s is a good 25-minute walk from where I am living, it was cold and drizzling, and I could have watched it all on television; but sometimes you just have to be there. Every road was leading to the Vatican. Even what passes for Roman road rules were in suspension, though it was hard to tell. On arrival at the square, 100,000 others who wanted to see history were there, too. I am not sure I have ever experienced such a group buzz before. Being a single traveller is often an advantage and I got a great spot in front of the left-hand Bernini fountain. It is also a prime spot for the huge screen, which proved to be essential.

The square, with its close proximity to St Peter’s, might seem to be the best place to be at a time like this...until the first group emerges on that balcony. Wherever you are, when the human beings emerge on that perch you realise how far away it is and small they are. It comes as no surprise that as a cinema scholar I thanked God for the big screen yet again! But, the Oscar goes to.... the square’s sound designer: modern acoustics met a Renaissance masterpiece, every word perfectly sounded around Bernini’s columns.

At 8.06pm the lights went on in the balcony loggia and the crowd erupted. It took another nine minutes for a cardinal, who looked decidedly unsteady on his feet, to come out and tell us that Jorge Mario Bergoglio had been elected Pope Francis. Jorge who? I was the only one who knew his name, let alone that he was a Jesuit. In fact, I had been on a panel discussion on Ireland’s RTE radio the previous Monday where he was talked about, and their Vatican correspondent, Gerald O’Connell, had said he could be the compromise candidate. I had told ABC TV the same thing that morning. I hope they were impressed with my skills as a prophet, as I am by Mr O’Connell’s.

Because I knew more than anyone else about our brand new Holy Father, and with all internet access down due to overload, I became our area’s papal expert. All I knew was that he was Archbishop of Buenos Aires, 76, a Jesuit and that he was said to be runner-up to Benedict XVI last time around. The rest I made up and sounded authoritative; my new and temporary disciples in the square lapped it up. I was translated into several languages - if only more of my books would be!

Francis stood there alone for what seemed like the cruellest time and then I realised why royal families never appear on balconies on their own. You can only wave so often - that is why they come in twos, and chat and wave and chat and wave - and royal families have a lifetime to practise it. The new Pope had 73 minutes to learn the wave, and no one with whom to chat. He looked stunned.

There was conjecture about why and for whom he chose to be called ‘Francis’. I started delivering my well-known class on ‘boy saints whose names begin with F’, and confidently asserted that it was a complex mix of Assisi, Xavier and Borgia. A Latvian woman nearby interjected, ‘No Borgia could have become a saint’. She failed my class, but later my own mark went down when we discovered it is not as convoluted as my theory was (it rarely is), but is all about Francis of Assisi.

Then we heard his ‘buona sera’ and the Latin Americans went wild, understandably. This man is now the most famous Argentine ever, jumping to first place over Che, Evita and Maradona. Now with ‘Francis’ they seem to specialise in one-name handles, but with friends like that...

However, Francis went on to speak as the Bishop of Rome, who ‘presides over all the Churches in charity. It is a journey of fraternity, of love, of trust between us.’ This was not lost on me. He is no ruler lording it over anyone. He is a pastor, and a leader who knows that the best way to get others to follow you is to empower them and lead by example. I felt a bit empowered just listening to him. Before he gave us his blessing, he did something I have never seen a pope do: he asked us to come to silence and pray for him, and then he bent over in a reverential bow, first and foremost before God, but also before us in the square and before the world. And 100,000 people were immediately obedient: still, silent, stunning. We realised that he was a genuinely humble man who understood something about holiness. We all bow in awe before mystery.

As he laughed and said, ‘Good night and have a good rest’, and turned and walked inside, it felt like your grandfather was saying, ‘It’s been a big day for everyone, and it is way past all of our bed times’.

We were told later that he refused the papal limousine back to the cardinals’ house, choosing instead to ride the bus with the rest of the boys. (I think a few bishop’s limo drivers should start re-skilling immediately!) I rode the bus home, too, but peace on earth and good will to all can only last so long. My trip was packed, uncomfortable and rocky; I fear Francis’ is soon going to be the same. But at least we glimpsed that night that our driver might know the way, because he is, at heart, a fellow traveller.

In the last week we have heard a lot about simpler things: Pope Francis rides the bus, cooks his meals, pays his bills, only flies economy class, thinks that 300 people could live in the papal apartments, rejected the silk and ermine cape, chose a gem-less second-hand silver-plated ring, goes off script, speaks from the heart, prefers lower-key vestments and told the Argentines not to come to Rome but to donate the money to the poor.

In isolation these things are irrelevant, inconsequential and even comic. Taken together, however, they confront a princely mentality whose names are wealth and its trappings: prestige, privilege and power. But the reign of God is not of this world, and Francis is already pointing to where it is to be found: for Christ came to comfort the afflicted and afflict the comfortable. As with his sainted namesake, I think this pope sees the poor. He really sees them. Miserando atque elgigendo, ‘lowly yet chosen’, the papal motto, is not just a heraldic nicety, it seems: it is a creed to be lived and shared.

Richard Leonard SJ is the director of the Australian Catholic Office for Film & Broadcasting.