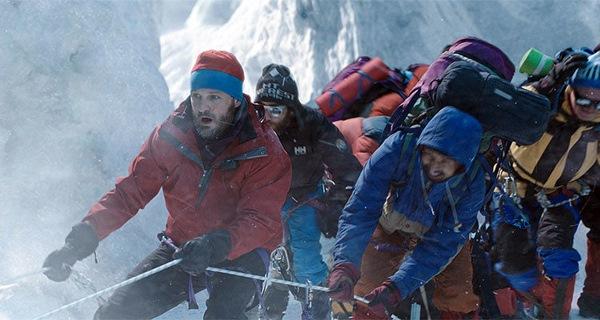 Based on a true story, packed to the brim with character actors with a history of delivering quality fare, and with a naturally suspenseful premise, Everest swells with potential. Unfortunately, the end product is somewhat less than the sum of its individual parts, and that potential goes unrealised.

The central premise is quite straightforward. Rob Hall (Jason Clarke) leaves his pregnant wife, Jan (Keira Knightley), at home in New Zealand as he sets off on a commercial expedition of Everest. With his trusty team manager Helen (Emily Watson) at his side, Rob brings a mish-mash group to base camp, including Josh Brolin’s Texan Beck Weathers, who has also left his wife, Peach (a sorely underused Robin Wright), at home. All is going well, with the usual pitfalls of mountain-climbing rearing their head as the group scale Everest. But when a snowstorm hits, everything changes and lives are lost with abandon.

At least one critique that cannot be levelled at the film is inaccuracy. It is seemingly at pains to stay extremely close to the historical events of April and May 1996. This is so much the case that it might have been better off being made as a documentary. There can be no doubt that the film is visually impressive, with broad, mountainous vistas and swelling storms cascading all over the screen. But basic dramatic tenets seem to slide under the film’s feet. The overlong first half creaks under the weight of expectation, padding out issues with a glacial slowness, yet exposition of conflict between the characters seems undercooked. And when the tension finally rises, it is constantly underscored by a soap-operatic obsession with teary-eyed close-ups. Had the first part of the film succeeded, these would be gut-punching moments of emotional rawness. As it is, it feels as if the filmmakers overly rely on the audience knowing that this is a true story in order to elicit the requisite compassion.

A sincere problem is that the female characters are charged largely with intensive hand-wringing and eyebrow-furrowing, while the men scramble around on the mountain. The contrast between the sexes is stark and this somewhat undermines the narrative. Indeed, accuracy is so much the aim of the piece, that the actors seem to expend most of their energy trying to get the Antipodean accents right. Only Sam Worthington and Jason Clarke (native Australians) come out with their integrity truly intact in that regard.

The script should pack more of a punch, given that it was written by Brits William Nicholson (Gladiator) and Simon Beaufoy (the nerve-shredding, true-life 127 Hours). And given Icelandic director Baltasar Kormákur’s experience of action-packed thrillers, with the Mark Wahlberg-heavy 2 Guns and Contraband on his CV, the lack of suspense is all the more surprising. While Salvatore Totino’s camerawork is impressive and the CGI technically adept, the final piece still comes up short.

Films with lesser plots appear to have managed something Everest has not: a convincing, bracing tension which grips the audience from the first minute. The film is well-intentioned, and certainly seeks to maintain reverence around those who lost their lives. The problem appears to be that such reverence does not manage to stretch the film anywhere beyond a gentle memorial.