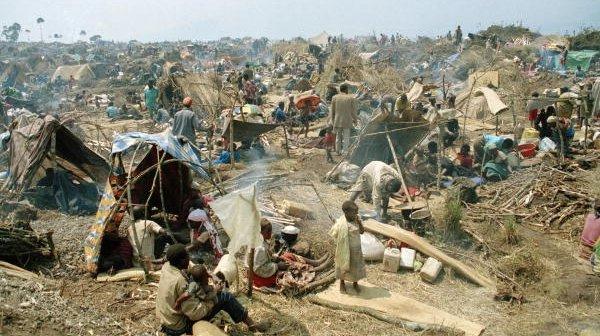 In a second article marking Refugee Week, a Rwandan woman, who came to the UK five years ago to claim asylum, writes for Thinking Faith.  She has been finally refused, but is now being supported by local social services due to serious ongoing health problems.  She has accommodation in a hostel and thirty pounds a week to meet all her needs.  She places all her hope and trust in God.

I was born soon after the first Rwandan genocide of 1959, after which a lot of Rwandans took refuge in neighbouring countries.  Hence I was born and grew up in Uganda as a refugee, survived Idi Amin, Milton Obote, the bad rulers of Uganda, who forced us and many others to go back to Rwanda in 1982. This was another genocide, which went unrecorded. Nevertheless we lived in Rwanda up to the time of the second genocide of 1995, which I survived, miraculously, under the dead bodies. By God’s grace I can witness that Jesus is alive and present in every situation, though unseen.

It was one night in 1994 after the shooting-down of the plane which killed the Presidents of Rwanda and Burundi that a group of young men, armed with machetes, forced their way into our house. They started slashing at everybody in the house and they assumed that nobody was still alive. It’s true nobody seemed to be alive, since I was also covered in blood. Up to now I didn’t know if I was dead or alive. What I remember is that I heard a voice in me praying, “Lord Jesus can’t you raise me from the dead for you did it to Lazarus after four days - the Bible tells me so”  and Paul’s letter to the Corinthians (2 Cor 4:7), “We may be pressed hard but not destroyed.”  Immediately, RPF soldiers came in and shouted, “someone is still alive”. They took me out and put me on their lorry and drove me to the camp near the Uganda border. Maggots were still coming out of my anus when I was taken to Kampala for proper treatment.

To cut a long story short, the struggle continued for me: as a genocide survivor remaining traumatised by my experiences and trying to cope with the consequences of the genocide – bereavement, trauma, physical injury.

I was finding it hard to run around the country hiding from the killers who thought that I might be a witness to what they did. So my life has seemed one of being constantly on the move, seeking peace, which I have never known in my life.  So I fled to the UK.

One thing I was hoping for when I came to the UK was to get this peace I desired and to live peacefully in a country which respects human rights and then I would be able to fulfil God’s purpose in my life.

Unfortunately my asylum application was refused leading to new suffering: government financial support and accommodation was stopped and I ended up spending nights on the streets fearing that I would be stabbed, or sexually abused. I resorted to sleeping on night buses seeking a safer place than the streets; but I would be embarrassed when the bus driver would wake me up to tell me that “This is the last stop”. Then I would change to another bus.  But the worst problem would be when I didn’t have a bus pass. I would be forced to walk all over the place looking for a safe corner to stop.  I would meet the alcoholics who scared me by shouting, swearing and asking for cigarettes and money, which I didn’t have.

Generally, I am suffering from mental torture, which I believe is worse than physical torture.  Those with physical difficulties may be unable to work but they can live their lives.  Those of us suffering from trauma and mental health problems as a consequence may not recognize what we do.

I am beginning to feel worthless; I have lost self-esteem, lost interest in everything. I have lost confidence. I am isolated and don’t have friends because they think I will be a burden to them, therefore people avoid me.

In fact I am not living a life of dignity and I am not sure of my security, since I am always scared of being returned to my country. I am like a prisoner on remand waiting for judgment. I can’t work; I can’t live where I want to in the UK.  I can’t concentrate to study.  I feel angry and resentful, and suffer from panic attacks and anxieties.

Thank God that I still recognise that all these are from the Devil, but Jesus overcame him. I am more worried when I feel too tired to pray. Last I am very grateful to the Jesuit Refugee Service which gives me support and makes me feel a useful member in society.