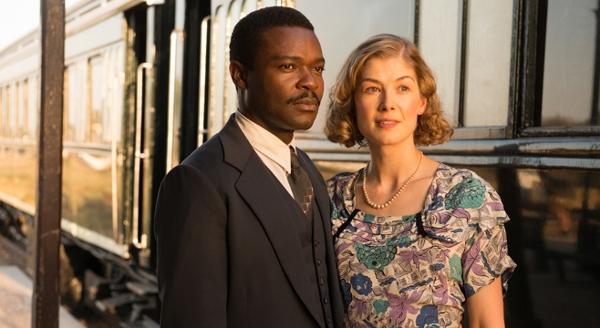 David Oyelowo and Rosamund Pike have both said that they were attracted to this project because it provided a rare opportunity to put love on screen. ‘Rare?’ you may ask. We are all aware of a multitude of love story movies. Consider, though, this observation by my colleague Nathan Koblintz in another film review for Thinking Faith: ‘Love on film is almost always about the emotions created by a relationship than the relationship itself.’ (I would encourage you to read the rest of his comments, too). With that in mind, perhaps the stars of this film are right and it is rare to see love on screen. And perhaps we do see it in this true story of Seretse Khama, the heir to the throne of Bechuanaland, and Ruth Williams, the English girl that he met and married in 1948 while studying in London, against the wishes of both of their families... and both of their countries.

A United Kingdom certainly ticks the box of portraying a relationship rather than the emotions it creates. It is pleasingly low on melodrama, not least thanks to strong performances from Oyelowo and Pike who convey Seretse and Ruth’s affection for one another authentically. And because the plot revolves around their grand gestures of commitment – to one another and beyond –there is no need for heavy, Hallmark-card signposting to be worked into the dialogue in order to let the audience know that this couple really are devoted to one another. These gestures, these actions, are what make this film a quite unique depiction of love – it treats love as a verb, and to that end sacrifices sentiment in favour of a study of true partnership and the fidelity, honesty, courage and generosity demanded of both parties.

Ruth’s own character arc is something of a journey along that spectrum – from brave but romantic idealism to total self-giving. The film’s most arresting scene comes perhaps half an hour in. Ruth has just arrived in Bechuanaland and meets her new sister-in-law for the first time. If Ruth thought that she had already navigated the most imposing obstacles to their marriage in the form of fierce opposition from Whitehall, this encounter is a rude awakening to the fact that the biggest hurdles are still to come. Her honest yet naïve intentions of learning about and joining a new community are confronted by the reality that neither a friendly smile nor a regal wave can mask the difference that is written all over her face. Her very presence is a problem, and her faith in her own good will and commitment exacerbates rather than solves it. Her one-directional thinking is met by an equal and opposite reaction: she is essentially told to check her privilege. It is truly discomfiting to watch Ruth’s optimism crumble as the division that for her had previously only existed at a political and abstract level is manifested so passionately and personally in front of her – a testament to Pike’s performance. Ruth’s self-indulgence in her good intentions gives way, in one conversation, to the demands of reality; romance makes way for love.

The trouble with all of that – and probably the reason why so many films bombard their audience with obvious sentiment – is that the dramatic experience never really takes off. We often want to have our heartstrings tugged; we want emotion writ large so that when the characters indulge themselves, we have a license to do the same. A film that elicits our admiration but not our imagination is rarely going to soar, and A United Kingdom suffers from just that problem. It celebrates values that deserve to be celebrated and tells a story that deserves to be told, but it also demonstrates why love on screen is such a rare beast.