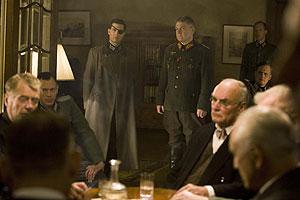 
One of the theories about the relationship between works of popular culture and the times in which they are created is that sad times produce happy stories, and times of plenty produce tragic stories. As with most literary theories, it hangs on the theorist being able to produce three examples that back up her/his argument and avoiding any counter-evidence – see, for example, an article in The Times using Slumdog Millionaire and Australia as evidence that in our recession-depression, we demand to be fed comfortable fairytales. Needless to say that theories of this kind omit the great complexity of the imagination’s place in the individual and society. And where exactly would a film like Valkyrie fit?

Valkyrie’s production was mired by various controversies: how suitable would it be to have Tom Cruise playing Colonel Claus von Stauffenberg, one of the better known of Hitler’s erstwhile assassins, given the actor’s public affiliation with Scientology, which in Germany is treated with caution and suspicion? How likely was it that the director of X-Men 2 would treat a national hero with the dignity his story deserved? However, what has emerged is a decently engaging film that avoids many of the clichés that must have beckoned from the wayside during its creation. The cinema was packed on this the first weekend of its UK release. What had these people come for?

The challenge for the film is that every member of the audience must know that von Stauffenberg’s plot is going to fail. From the outset there is going to be, in that respect, an unhappy ending. The directors do not attempt to turn this into a classical tragedy, with the known ending adding pathos to the mortals’ attempts at meaning; nor is it the story of nobility betrayed. Instead, through some sensible storytelling (we are allowed to pretend for some twenty minutes that the plot has worked and Hitler is dead) we are brought into the world of von Stauffenberg and the other conspirators. False climaxes along the way keep the audience engaged as the audacity of the plan becomes apparent. Cruise’s colonel is no Mission Impossible-style hero: he is resourceful and committed rather than a superman.

Our interest is retained thanks to this resourcefulness. That, and the sense of time-tourism: seeing Hitler’s Wolf’s Lair and his mountain hideaway reproduced on screen must give the audience a flicker of that excitement that soldiers breaking into Saddam Hussein’s palace must have felt. In addition, it’s very rare to see World War II from the perspective of the Germans, particularly when they speak in heroic American accents. Linked to this reversal of assumptions, we are treated to several shots of beauty in repetition: thousands of straight pine trees; a group of rebel employees all saluting von Stauffenberg with their membership cards; a pool of typists in a communications centre raising their hands in unison as the news comes through of Hitler’s death.

The “based on a true story” claim that underlies the plans to kill Hitler, seize control of Berlin and broker a truce with the Allies before they arrived at the city gates, adds a core of amazement as we see how close to fruition the plan came. The seriousness of the story seems to have eked out of actors such as Eddie Izzard, Bill Nighy and Kenneth Brannagh understated performances that add to the sense that this was not a story about one man working alone, but about a group of people acting out of common purpose. If you wanted to affix the theory of sad times = happy art, then perhaps this is what you would seize upon: that collective endeavour inspired by moral principles is worth it even in the face of failure.