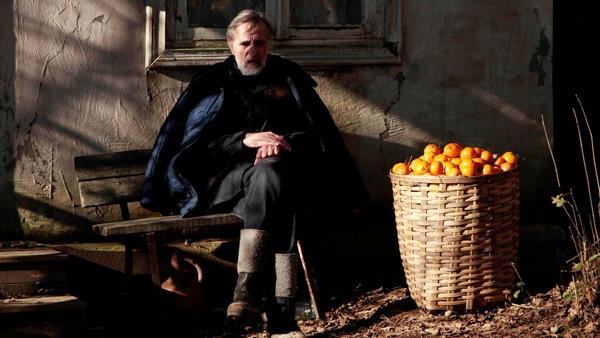 A tangerine harvest may seem a strange vehicle to use as the backdrop to this Oscar-nominated film about the pity and the futility of war, but it carries perfectly a story that combines beauty of landscape with random and savage violence, the quiet depths of human compassion with brainless thuggery, wry irony and a series of unnoticed tragedies amid a largely ignored war. The focus is deliberately small: in 1992 Ivo (Lembit Ulfsak) and Margus (Elmo Nuganen), two Estonian farmers, stay behind in their obscure Georgian village when everyone else has fled back to Estonia during the conflict between Georgia and Abkhazia, in order to save Margus’s tangerine crop that has just come into season. The film begins with a deceptive slowness that mirrors the tiredness of two old men in a part of the world forgotten or overlooked by the attentions of a war-hungry media. Margus’s gloomily naïve enthusiasm is tempered by Ivo’s weary resilience, but both are determined to bring in the golden fruit, bursting with life when all around them hangs the threat of death. The years-long routine of picking fruit and making wooden crates allows them a semblance of normality amid the surrounding madness. Despite their canny old men’s wariness, they get shockingly hurled into the midst of the fighting between two opposed groups of soldiers. One soldier from each side survives, heavily wounded. With silent resignation, Ivo takes them both in under his roof and, with Margus’s reluctant help, nurses them.

Niko (Mikheil Meskhi) is a Georgian, an actor before he became a soldier, longing to return to a more civilised time. Ahmed (Giorgi Nakhashidze) is a Chechen mercenary fighting on the Abkhazian side. We see him first bursting brutally into Ivo’s house, a monument of mindless, macho bravado. Ivo has every reason to despise Ahmed, but we sense already in the old man not only an unshakable human decency but an iron determination to act in contrast to the violence around him. Ulfsak’s hangdog features and gangling frame make Ivo look like a lugubrious Great Dane, trying to keep two small bulldogs from tearing one another to pieces.

Cultural and social differences, as well as what each has understood about the conflict in which they are engaged, make the two convalescent soldiers swear to kill each other once they have recovered. The tension mounts as violent words threaten to break into action at any moment, but Ivo and Margus’s dogged insistence on acting civilly to them both prevents their posturing from gathering momentum. They are forced instead to confront their mutual humanity and what war is doing to them both. While they will never be friends, they can at least see the pointlessness of being deadly enemies. When soldiers from one side come to threaten all four men, they fall immediately into a pattern of solidarity with one another, the inhabitants of a little haven of fragile peace holding out against a killingly hostile world.

This is a beautifully crafted film, which richly deserved its Oscar nomination and is enormously rewarding to watch. It’s not just another war film. In contrast to the Hollywood blockbuster treatment of war there are no great heroes, no archetypal warriors blasting their way through to final glory. There is very little action in comparison to the relentless video-game of pyrotechnical violence and high-octane drama which so often characterises English-language war films and so easily lapses into a hymn of praise to turbo-charged machismo and a tribute to brutality. There is a certain shame for a Western European audience in seeing the mortal weariness of a region so long torn by a conflict that barely made ten seconds on our television screens at the time.

The pity of war is conveyed as much by the beauty of the rural landscape prior to its obliteration by gunfire as by the human stories of the protagonists as they slowly unfold before one another and dare to become humanly vulnerable. The acting, like the directing, is deliberately understated, but manages to capture the ambiguity of the situation in which the characters are caught. Director and screenwriter Zaza Urushadze allows his anti-war message to simmer below the surface. The scenes of violence flare up with shocking suddenness but disappear as quickly, leaving a numb disbelief and desperate sadness in their wake. There is poignancy in the exchanges between the older and younger men, but a certain ironic humour. Niaz Diasamidze’s haunting music never hammers at our ears but carries an unmistakable theme of lament throughout the film. At times there is an almost elegiac sorrow in the conversations and actions amid the senseless loss and waste, but there is also a quiet sense of redemption, confirming however provisionally a belief that while human beings retain their capacity for decency, not all is lost.