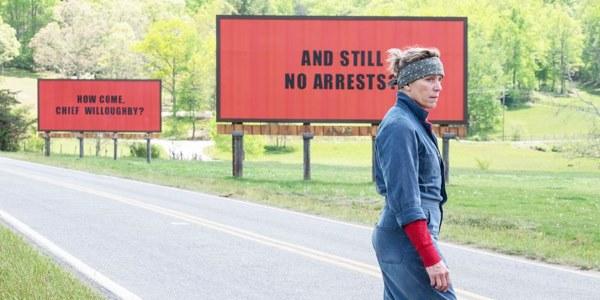 Mildred Hayes (Frances McDormand) visits the office of a small advertising company in order to hire the vacant three billboards outside Ebbing, Missouri. The office is manned by Red Welby (Caleb Landry Jones) who, when we meet him, is reading Flannery O’Connor’s ‘A Good Man is Hard to Find’.

This, surely, is no coincidence. The incongruous intrusion of the grotesque into the everyday that was the hallmark of O’Connor’s fiction also characterises this film. Both start with familiar or at least unremarkable territory and take their readers/audience to extremes, and in doing so, knock out the ‘“common sense”, which is vaguely secular, rational and enlightened, that corrupts true inspiration.’[i]

The territory we start from here is a small town that, a few months prior to our introduction to it, lost one of its residents to a brutal murder. Victim Angela Hayes’s mother, Mildred, uses the billboards to issue a challenge to local police chief, Bill Willoughby (Woody Harrelson), about the failure to arrest anyone for the crime. The cat-and-mouse chase that this premise leads us to expect is turned on its head at every opportunity, with almost every member of the cast of many that we encounter playing both victim and perpetrator at some point.

Three Billboards is an accomplished piece of filmmaking. The film in its entirety has been rightly rewarded with awards and nominations aplenty, as have, in particular, McDormand and Sam Rockwell for their performances and writer/director Martin McDonagh for his screenplay. The depth and intrigue of the latter comes from the richness of its characters, rather than from convoluted events or clues that are hidden from the audience. That’s also a trademark of Flannery O’Connor: ‘Writing isn’t a matter of saying things, but showing them to the reader. If a character is wooden, they should have a wooden leg. If their personality changes, then you must get a thief to steal the leg!’[ii]

That is a reference to the character of Joy/Hulga, in O’Connor’s short story, ‘Good Country People’.[iii] At one point, this self-professed atheist is anxious to get rid of a Christian guest in her house and utters to her mother the memorable line, ‘Get rid of the salt of the earth, and let’s eat.’ This intolerance and impatience are echoed in Mildred’s reaction to a visit from the local priest. Her speech about the hollow authority of a clergyman rings all too clearly, but one gets the sense that, institutional concerns aside, her concept of justice is too pragmatic and narrowly defined for it to be receptive to God’s Word, at least at that point in her journey.

But as things move on and get worse – the grotesque is ignorant, violent and bloody, but not without humour, in Ebbing – new opportunities for growth, and grace, arise, another move that comes straight out of the Flannery O’Connor playbook.

O’Connor wrote, intriguingly, that ‘the devil accomplishes a good deal of groundwork that seems to be necessary before grace is effected’. This is a plausible evocation of a kind of negative theology: O’Connor posits God as absence, in the cruelty and hopelessness of her narratives, where only the humiliation of proud individuals can open up the possibility of redemption.[iv]

And so although there is no easy labelling of right and wrong, no neat resolution to this film and so nothing satisfying about it, that’s no bad thing. Because there is at least the possibility of redemption here, even though it has come at a cost and its parameters are undefined, even by the time we reach the ambiguous closing scene.[v]

[iii] Flannery O’Connor, ‘Good Country People’ in A Good Man is Hard to Find And Other Stories (1955).

[v] That scene plays out to the soundtrack of ‘Buckskin Stallion Blues’ by Townes van Zandt. Perhaps another of his songs, ‘Lungs’ would have been the more fitting choice, proclaiming as it does that: ‘Salvation sat and crossed herself/Called the devil partner.’

Learning to pray in front of the television