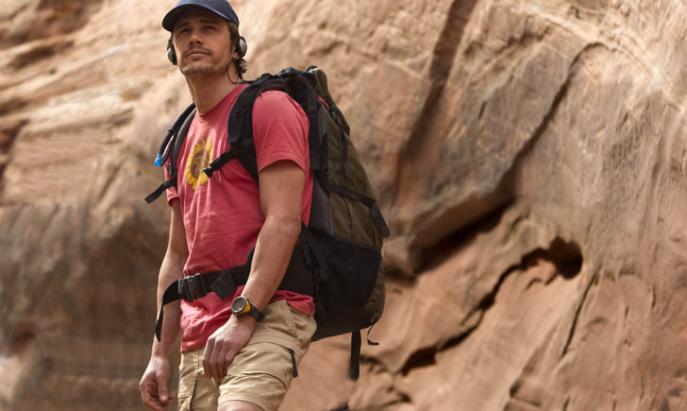 
Apparently members of the audience at the Toronto and Telluride Film Festivals required medical attention upon watching Danny Boyle’s 127 Hours, so it is with some pride that I am able to report nothing more severe than light sweats and an expletive-muttering journey from the cinema to the quiet, empty pub where this review is being written. I do have to confess that during the film I experienced wincing, screwing up my eyes and doing the thing where you look over the top of your glasses at the screen so it all goes a bit blurry. I knew nothing about this film before I watched it – not that it was based on a true story, nor that it features the kind of tension that the Saw films can only pretend to. As the finale to the London Film Festival it is certainly dramatic.

Put simply, it is a film about the experiences of Aron Ralston, an American mountain climber/general adventurer, who in 2003 found himself trapped by a rock in a Utah canyon. The title lets you know how long he survived there alone, doing those everyday things we all do like drinking his own urine, fantasising about escape, cutting his arm off, wondering if anyone will notice he has gone, hallucinating and recording his thoughts and goodbyes on his camera. In Danny Boyle’s hands the story has become a stylish, very loud investigation into the physicality of survival.

Obviously an event like this needs little embellishment to make it extraordinary (Ralston can now, for example, command thousands of dollars for motivational speeches). Boyle has made a claustrophobic film, hundreds of brief close-ups of Ralston’s face, inside his arm, inside the increasingly empty water bottle, or taking the point of view of Ralston’s own camera. The noises of his body are amplified, mixed in with an adrenaline-heavy soundtrack, and they swamp the cinema so even with your eyes shut you can’t miss the creak of bone and rock.

The claim to realism that a film like this makes doesn’t extend to only the special effects and reproduction of facts: if James Franco’s playing of Ralston hadn’t created a believable person then it would simply be another action film. Here the success lies with the skill with which Ralston’s life (or the stylised Ralston that the film gives us) is sketched in. There are no overwhelming revelations that blind him in the hours down the canyon, nor is there a great lost loved one waiting to have their relationship difficulties solved by a near-death encounter. Instead, a patchwork of memories and fantasies – about the two girls with whom he shared a stranger’s excitement a few hours before the fall; about the unreturned calls to his mother and his sister’s wedding; being a kid with his dad. Having never been trapped down a crack in the ground with my arm wedged between a rock and a wall I have little to compare the realism of these last thoughts with, but it felt messy, sweet, human. Funny too – his mock self-interview using his camera brought laughter from the audience, which is quite a feat, considering everything.

Beneath the fascination, the horror and the sophisticated cuts between reality and dream there is a contemporary myth waiting to be freed. Ralston is portrayed, in his own words, as ‘supremely selfish’ – not the selfishness of greed, but in the sense of self-sufficiency. He is played as a man whose pleasure comes through excitement, and whether that involves the presence of other people or not doesn’t matter. As one of the girls who he meets comments, ‘I don’t think we featured in his day at all.’ He is the seemingly unbound man who treats life as a piece of solo-art – not unlike the high wire-walker Philippe Petit, whose story was told in Man on Wire. It’s one expression of the idea that humans find their truest expression in self-expression, rather than through an identity embedded in a group, whether that be family, friends or ‘community’. 127 Hours works on the tremor where self-sufficiency and loneliness overlap: the script draws two converging lines – one from the rock appearing from space as a meteorite millennia ago, and the other of Ralston’s life – the rock and the man meeting at this lonely point, in a place where he has told no one he is going to, and with those who know him, knowing his unreliability when it comes to keeping appointments. The result is the agony of those trapped hours: what he assumes will be his last communication with his family are one-way words recorded on the camera.

Ralston is still climbing and canyoneering, snowboarding and swimming – minus one arm and plus one wife and one child. 127 Hours is the closest most of us will get, thank God, to the violent pivot-point of his life.