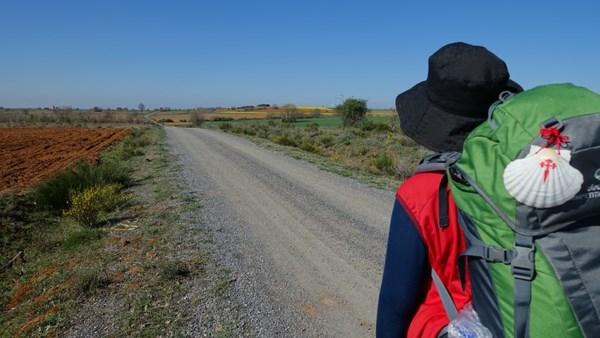 The famed routes of the Camino de Santiago de Compostela were walked by over 300,000 people last year – what attracts so many people to undertake the pilgrimage to St James’s place of burial? Emma Holland considers the resurgence in popularity of a centuries-old tradition.

The statistics about the number of people walking the Camino de Santiago de Compostela in 1986 point only to the sparseness of a forgotten trail. A low pilgrim population in the 80s turned an ancient path into more of a medieval legend. Rather than a well-known travel destination, the ancient ‘Way of St James’ was then little more than a dusty relic of Christian, and pagan, history. However, 21 years later, statistics show that 301,036 pilgrims received their Compostela certificates in 2017. [1] The powerful resurgence in the popularity of pilgrimage, particularly of the Way of St James, is undeniable. Is pilgrimage providing the perfect nourishment for the ritualistic needs of a spiritually hungry generation?

The concept of ‘going on pilgrimage’ has traditionally evoked many ideas: undertaking a journey to serve a personal purpose; giving expression to a difficult situation through bodily action, in the hope of securing an outcome; following in the footsteps of many who have walked the same path before; fulfilling a religious obligation. The idea of pilgrimage has over time evolved to meet the expectations of a 21st century world and yet still, whether the hope is for healing, miracles, peace, or even weight loss, people choose to walk the gruelling 500 miles of the Camino, with the bare minimum of possessions, more than a thousand years after the first pilgrims.

There is little doubt that the Camino owes much of its newfound fame to the media. Through Martin Sheen’s 2010 film, The Way and the well-read German book, Ich bin daan mal weg[2] (‘I’m off then’), to the BBC’s recent celebrity challenge, Camino: The Road To Santiago, audiences around the world have discovered the charms of the pilgrimage and have flocked to immerse themselves in the wonders of the Camino. The common threads of these pieces weave one theme: a focus on the inner life with the hope of some dramatic, irrevocable change by the end of the journey.

Biblical and anthropological insights could shed some light on why this might be. The God of the Old Testament provided the people of Israel with ritual instruction, intending to show them how properly to praise their creator and provider. Rituals were the intended outlet for the heart, reinforced with a physical action. One such example is fasting. As Karen Eliasen describes: ‘Fasting as a ritual act is not merely a symbol or a metaphor for some other-worldly activity. It is an experience of concrete, this-worldly changes.’[3] Eliasen continues to say that these physical changes are part of a communication and dialogue between God and the people. In a similar way, pilgrimage is a way of physically enacting and embodying a conversation with God. It encompasses all manner of the human being: it is spatial, physical and it speaks to the inner emotional and spiritual dynamics of a person. To provide an example of this in another cultural context, anthropologist Catherine Allerton studied the padong journeys undertaken by the brides of Manggarai of Eastern Indonesia, whereby brides would walk long distances from their kin towards their spouse’s family, wailing on the way as a fully embodied image of the journey the heart is also taking.[4] Such pilgrimage rituals witness to an important inner journey and to the importance of documenting emotions through physical manifestations.

However, it is the anthropological theory of ‘liminality’ developed by Victor Turner that might be the most important lens through which to study the contemporary allure of pilgrimage. Liminality can be described as the ‘in-between’ place whereby one has crossed a threshold but has not yet arrived at a final place, communitas, a place of completion. Turner suggests that ‘pilgrimage provides a carefully structured, highly valued route to a liminal world where the ideal is felt to be real, where the tainted social persona may be cleansed and renewed’.[5] In other words, it is a place to forget socially-structured life before the pilgrimage and move towards the place of communitas. In a society seemingly more polarised than ever, the idea of being somewhere outside of the socio-political realm where one is equal with fellow pilgrims could be a highly appealing prospect. Pilgrimage almost has the ability to create a microcosmic utopian society, in which one bonds along the way with all those who are on the same inner and outer journeys.

The Gospel of Luke also speaks to the spiritual need for a ritual such as pilgrimage. The story of the road to Emmaus provides an unusual example of pilgrimage, with all of the elements of transformation and spirituality for which one might be searching. Cleopas and his unnamed companion are in some ways making a pilgrimage in the wrong direction: away from Jerusalem, a statement of lost hope. Yet Jesus walks with them in the wrong direction, opens the scriptures to them and guides them to undertake a pilgrimage of (what becomes for them) burning and transformed hearts. Our fascination with adventures where, like Cleopas and his companion, we face challenges we don’t understand at the time and overcome them, where we pursue the ultimate happiness even if we cannot recognise it, is given expression in countless stories, told over and over. Aptly, John Bunyan wrote, ‘It is always hard to see the purpose in wilderness wanderings until after they are over.’[6]

The Camino de Santiago and other pilgrimages offer as exciting an opportunity to remove oneself from familiar and day-to-day structures today as they have always done.  Perhaps our craving and desire for this is innate. And as the world continues to wrestle with purpose, meaning and a desire to be significant, to seek transformation and enlightenment, perhaps pilgrimage will continue to feed the needs of an ever-hungry world.

Emma Holland is Producer of Pray as you go. She walked the Camino in 2014.

[1] Statistics according to The Confraternity of St James: https://www.csj.org.uk/the-present-day-pilgrimage/pilgrim-numbers/

iWitness: The Way of Saint James