Skip to main content
Photo by Fresco Tours at flickr.com 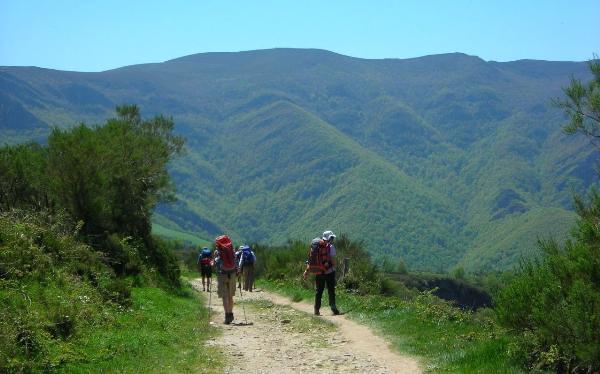 More than 100,000 people walk the routes of the ‘Camino’, the pilgrimage to the Cathedral of Santiago de Compostela where St James is believed to be buried, each year. As the feast of St James approaches, John Bateson-Hill describes his recent journey along this well-travelled path.

I stood for a moment looking out across the Atlantic Ocean wondering how it had all happened.  In my mind’s eye I could see the little boat carrying the body of the Apostle being blown towards the shore.  Once it had landed, his faithful disciples would then have had to transport the body to its final resting place, a place we now know as Santiago de Compostela.  I was standing at the lighthouse on the very tip of Cap Finisterre having walked over a month through wind, rain and sun from the Pyrenees across northern Spain to reach the tomb of Saint James, or Santiago as he is called here, and then followed the extra miles to reach this point where James’s own Spanish journey had begun.

Fact and fiction are hard to disentangle but early accounts suggest that after his martyrdom in Jerusalem, Saint James was brought by boat to the very north west of Spain to a region we now call Galicia.  When the Apostles were sent out to preach after Christ’s Ascension, it was to this far-flung part of the Roman Empire that St James is supposed to have come.  His body lay undiscovered until the 9th century when a hermit was led, miraculously, to the burial site.  This event marked the beginning of an extraordinary story that would see pilgrims travelling from all parts of Western Europe on foot to the Apostle’s tomb. The simple shrine that first marked the sight has gone, his remains now housed in a silver casket in the crypt of the magnificent cathedral of Santiago itself.

Here, looking down at the pilgrims as they gather in the golden square below, is the familiar image of Santiago; dressed in his pilgrim attire, holding his stick, his gourd for water and on his head a hat with the famous scalloped shell that has become the emblem of the whole pilgrim route.  (People like to walk with scalloped shells dangling from their back packs and the marker that shows pilgrims the way is both a yellow arrow and a scalloped shell).  Carved in stone, wood or metal, this image of Santiago can be seen adorning churches, monasteries or village squares up and down the entire route.  It is perhaps one of the best known and popular images of any saint, and it has endured through the ages almost unchanged.  Saint he may be, but this picture of the Apostle reminds us that he is near, interceding for us in our struggles as we journey on foot across every kind of terrain.

My own part in this story began at St Jean Pied de Port, a town that sits in the foothills of the Pyrenees, just inside the French border.  I had been asked to join two friends who had started their walk in mid-France at the town of Le Puys.  To be honest, I had not prepared very well and did not know really what to expect.  It was only after we had crossed the Pyrenees and come to the monastery at Roncesvalles, where we were put in a giant stone walled dormitory for 100 pilgrims in bunk beds, that I got a taste of what was to come.

Sadly my two friends had to return to England due to unforeseen circumstances shortly after we had passed the city of Pamplona.  From this point I was travelling on my own.  But I was certainly no solitary pilgrim; indeed the sheer numbers of people walking this route took me quite by surprise.  Most come from Europe - Germans, French, Italians, Spanish, Scandinavians, with a mere handful from Britain and Ireland.  But some come from great distances to walk the Camino and I met people from as far away as America - north and south - and Australia, with a sizeable number also from Japan and Korea.  Another of the big surprises was the number of women who were walking on their own.  Most were older and those I spoke to had left grown up families behind to fulfil a dream they had long had of walking by foot to the tomb of St James.

In days gone by, churches and monasteries would have provided welcome hospitality to the intrepid travellers.  Many of these have disappeared but some of the bigger religious houses along the route still offer overnight accommodation.  While most of this tends to be dormitory style – anyone contemplating walking the Camino needs to take a good set of earplugs to protect against snoring! – the washing and showering facilities are always good and there is often the opportunity for Mass and prayer in the church.  Occasionally you would stumble across a hidden gem that wasn’t even noted in your guidebook: a house perhaps where pilgrims could enjoy the rare privilege of a shared meal seated around a table with the possibility too of evening prayer.  These could be special occasions, with pilgrims from different countries each voicing prayers in their own language.

But as I travelled I found myself asking what it was that drew such a wide and varied range of people to this place.  Why was it that people were prepared to endure discomfort and live with nothing but what they carried on their back for over a month?  There was the undeniable pleasure of being out in the wide, open spaces of northern Spain with its ever-changing landscape unfolding all around us.  Then there was the knowledge that you were walking an ancient route that pilgrims down through the ages had passed along, often in far more hazardous conditions than those we endured.  Also, there is the sheer physical challenge of walking a route that, if you start at St Jean and you continue on to Finisterre, is getting on for 1000 kilometres.

But the Camino is more than this; it has a power of its own, as a German walker reminded me, a power that both attracts and fascinates.  People of faith, spiritual seekers and even those who say they have no religious faith are drawn to walk the Camino.  And here is the great contradiction. While many of the churches and monasteries that line the route now lie empty or have been reduced to little more than museums, the Camino itself is buzzing with life.  When you ask someone why they are walking, they may find it hard to give a clear answer, but as you stand in the golden square in front of the cathedral at Santiago and watch as the pilgrims pour in, you begin to realise you are standing on sacred ground.


John Bateson-Hill is an Occupational Therapist and a parishioner of Corpus Christi, Brixton.

iWitness: The long and winding road