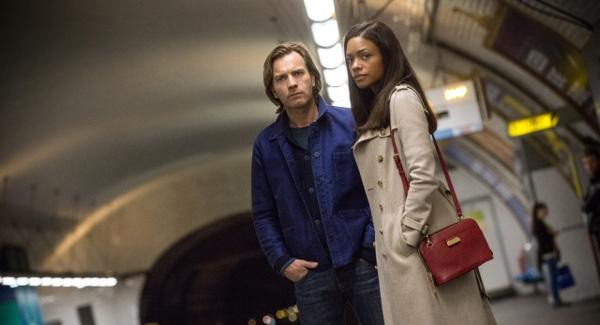 A woman wants an adventure to share, not to be the adventure. So writes John Eldredge in Wild At Heart, the one-time American bestseller about how to be a manly Christian. The feasibility of generalising so broadly about half of humanity aside, there may be a grain of truth to what he says, the same grain buried below the shimmering surface of this film. While overall it is a pretty straightforward spy thriller, when read between the lines Our Kind of Traitor is also an oblique reflection upon the temptation - and ultimately transformation - of the impulse to adultery.

The film opens in a hotel bedroom in Morocco. Professor Perry Makepeace (Ewan McGregor) is kissing a naked woman, who, shortly after our collective intrusion, stands up and listlessly walks away. It turns out this is Gail (Naomie Harris), his wife, and they are on a romantic getaway, but something isn’t sparking.

We follow them to dinner, which while glamourous is also interrupted, this time by preoccupations with her work. When she walks away to take a call, the professor gets wrapped up in the espionage racket the trailer so thoroughly lays out. Russian mafia, money laundering, MI6 - the whole adventure spills out of the cracks, it would seem, of their broken relationship at home.

And yet, interestingly, the truth turns out to be just the opposite. The couple were in Marrakech, it is no great spoiler to disclose, attempting to patch up their marriage in the wake of the professor’s infidelity. His dink existence (Double Income, No Kids) with his successful, beautiful London lawyer spouse, it would seem, was not enough for him. And it was the adulterous ‘adventure’ that followed which broke their relationship.

While this is the story’s unseen inciting incident, the majority of what we see is the fight to hold together a family. Most conspicuously, the family is someone else’s, and most of the film follows Perry’s supererogatory efforts on behalf of Dima (Stellan Skarsgård), the Russian money launderer, to secure the safety of his half dozen or so progeny. But more subtly, the family Perry fights for is his own: he fights for his marriage, paradoxically, by risking his life on behalf of persons extrinsic to it.

Perhaps the same could be said of the mystery of all successful marriages. The imperative that a Catholic marriage remain ‘open to life’, too often reduced to rigid ‘thou shalt nots’ about activities in the bedroom, takes on a more vibrant and exciting air when rendered positively in terms of maintaining the parameters of love. The sacrament of marriage, it might be said, structurally requires an outward-looking receptivity to risk. Romantic love retains its robust character with an openness to shared adventure.

All of this, it must be admitted, is a teasing out of themes only implicit in the film, which is mostly a quick dip into the fictional worlds of consolidated crime and shady diplomacy, and on this level perhaps not especially original. But here and there, gilding the edges of the well-executed if ultimately predictably tropes of international espionage fiction, are glimmerings of a more thrilling because ultimately more personal story. Governments, corruption and dirty money extravaganzas may all pass away, but the romance of family life endures forever.

OUR KIND OF TRAITOR - Official trailer - In cinemas now