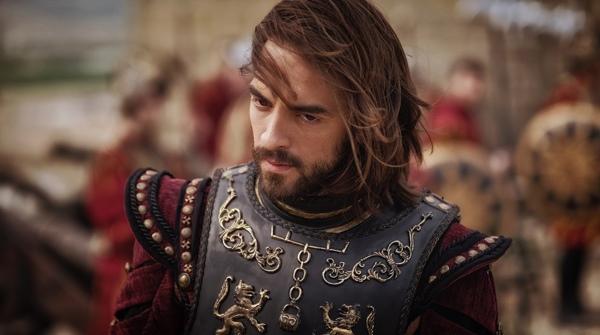 Balanced precariously on a rocky pinnacle at the top of a mountain that wouldn’t feel out of place in The Lord of the Rings, an anguished figure looks set to fall to his own destruction. This brief scene provides an unconventional opening to a new film based on the Autobiography of St Ignatius of Loyola. It demonstrates, right from the start, some of the challenges of making a film of this kind.

Despite its title, only given centuries after it was written, the Autobiography is no conventional account of the life story of the sixteenth century saint. It is closer to what today might be called a ‘faith-history’, narrating how Ignatius, towards the end of his life, understood God to have been working with him some decades earlier. Nor was it written for his own personal reflection, but at the urging of those who had by then become his closest companions. So the way the story is told is shaped by their need to be able to inspire a later generation of followers. It is the result of this complex process that Paolo Dy and his team have attempted to transfer to the cinema screen.

It can be said at the outset that they have in many ways succeeded. Ignacio de Loyola manages to convey not simply the outer events of the years leading up to Ignatius’s departure for the University of Paris in 1527, but also offers a good sense of what was going on then in his mind and heart, and in those of the people he encountered. The first part of the film concentrates on Ignatius the soldier. This culminates in the siege of Pamplona, where he convinces the garrison to mount a futile defence against a French force by whom they are greatly outnumbered. Gravely wounded (here, not by the legendary cannon-ball but by masonry dislodged by the shot) he is taken back to Loyola where his conversion begins.

The film, made by a Filipino company, aims for Hollywood production values but with limited means. Choices have clearly been made. The siege is portrayed impressively, while Ignatius’s pilgrimage to Jerusalem, following his recovery, is referred to but never shown. Use has been made of historic locations, such as the interior of the still-standing castle of Loyola, rather than expensive stage sets, allowing for costumes that would stand comparison with those in any blockbuster.

A major turning point in the film occurs when Ignatius starts to share with others the fruits of his own reflection. Here the focus is placed on events in Alcalá in 1527, while he is beginning to study theology at the university there. We are shown Ignatius as spiritual director, teaching the rudiments of discernment to a merchant through conversation. What had the man planned to do today? Receive a shipment of goods, deal with a customer and, at his cousin’s insistence, come to listen to this strange preacher. But if he was now on his deathbed, what might he have wished that he had done? Visited his sick mother, perhaps spent more time with his son. And how does considering this alternative prospect make him feel? The merchant reports what anyone familiar with discernment will recognise as consolation. The film, in a five minute scene, has offered some sense of how the Spiritual Exercises might have worked in their earliest incarnation.

However, as the scene draws to a close, a Dominican friar appears from behind a tree where he has been listening closely. He questions one or two of the crowd, then invites the speaker to supper to talk further with his brethren. After being sharply questioned, Ignatius is immediately imprisoned pending trial by the Inquisition. And here the film leaves its historical roots to look more closely at its subject’s interior life. As he awaits trial, Ignatius questions his own motives. Drawing on material which in the Autobiography unfolds at Manresa, before Ignatius leaves for the Holy Land, here he doubts himself while recalling the severe penances of the early days of his conversion. Is he driven by trust in God, or by pride? Can he hope to live this austere life for all the years to come? All this comes to a climax back on the mountain top, where Ignatius finally achieves a clear recognition of the different interior voices, one leading him towards God and the other away from Him.

On one level, then, the film tells the story of the early life of a real life knight-errant, with enough dramatic scenery and incident to keep the viewer’s attention. On another it tries to dramatise the process of discernment, of being able to recognise God’s voice amidst the competing calls of a complex world, and it largely succeeds in this. That it does so is due in no small part to Andreas Muñoz, the actor who, as Ignatius, is called to carry the whole production. The Jesuit Communications Foundation of the Philippines has done well to produce a film that can be viewed simply as a gripping story, or as an instructive narrative. As we close, Ignatius is limping off towards Paris. His meetings with Francis Xavier and Pierre Favre, the move to the Rome of the Renaissance popes, and the foundation of the Jesuits, are all in the future. Dare we hope for a sequel?

‘Give them exactly what they want’: The Meditation on the Two Standards