Skip to main content
The relics of St Gordianus at Stonyhurst College. 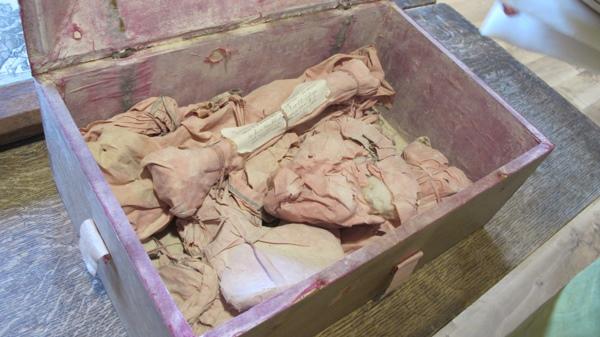 The relics of St Claude de la Colombière SJ and St Margaret Mary Alacoque will visit London from 9-13 November. Why have Christians through the ages considered it important to venerate the physical remains of those who have gone before them in the faith? For All Saints’ Day, Jan Graffius explains how the physicality of Christian faith contributed to the value placed on relics, and describes how one saint’s relics help us to think about Christian witness.

For ourselves, too, we ask some share in the fellowship of your apostles and martyrs, with John the Baptist, Stephen, Matthias, Barnabas, [Ignatius, Alexander, Marcellinus, Peter, Felicity, Perpetua, Agatha, Lucy, Agnes, Cecilia, Anastasia] and all the saints.

These words from the first Eucharistic Prayer will be familiar to many of us (and when I listen to the litany, I am always cheered at the thought that those strong women of the early Church are equally remembered and honoured). The example of those who found and held to their faith in those first uncertain centuries of Christianity still has power to move us today. Early Christians gathered at the sites of martyrdom, and, when it was safe to do so, built their first churches over the graves of the martyrs. They wanted to be close to the bodies of those whose faith had helped establish Christianity, drawing strength and comfort from their witness and physical presence. Many early martyrs were placed in excavated catacombs outside the walls of Rome, and it was the custom for early Roman Christians to seek burial close to the resting places of the martyrs.

Christians wanted to bury their dead decently, to prevent further state-sponsored indignity being visited on the bones of those who had already suffered so much. This, perhaps, was one of the original impulses behind the development of the Christian cult of relic veneration. Most civilisations, including the Jewish faith, the ancient Mesopotamians, Greeks and Romans, regarded the dead human body as an unclean thing, to be rapidly interred; the memory of the deceased was celebrated, but the physical corpse was cleanly and decently put out of sight.  But Eusebius, writing in the 4th century AD, quoted the account of a Christian witness to Polycarp’s martyrdom in 167 or 177AD:

we later took up the bones, more valuable than precious stones, of more esteem than gold, and placed them in a fitting location. There, insofar as it is possible to do so, we shall meet together in joy and gladness (when the Lord permits) to celebrate the anniversary-day of the martyrdom: this in memory of those who suffered before us and for the preparation of those who are going to suffer.

Christianity has always been a physical faith. The incarnation itself is the ultimate connection between God and human beings. In the gospels and Acts we note that physical presence plays a frequent part in many miracles: the blind were cured by Christ’s spittle and touch; Peter’s shadow was believed to have healing qualities; Paul’s handkerchief had the power to cure the sick. From the earliest times, the Church believed that this power to effect miracles was also present in the bones of those who died for Christ.

As centuries passed the existence of the Roman Christian catacombs faded into memory, until a startling discovery was made. In June 1578 some Roman labourers quarrying stone two miles outside the walls of Rome broke through into an ancient underground catacomb. The discovery of vast numbers of early Christian burials, carved martyr inscriptions and subterranean chapels caused a sensation.

It is with wonder that we have seen and several times visited the cemetery of Priscilla, as soon as it was discovered and excavated. We can find no better words to describe its extent and its many corridors there than to call it a subterranean city. All Rome was filled with wonder, for it had no idea that in its neighbourhood there was a hidden city, filled with the tombs of the days of the persecutions of the Christians. That which we knew about before from written accounts and from the few cemeteries which were only partially opened out, we can now realise fully, and, filled with wonder, see with our own eyes the confirmation of the accounts of St Jerome and Prudentius. (Cesare Baronius, Annales Ecclesiastici)

There were sound practical, political reasons why the Catholic Church should have been so enthused by the re-discovery of thousands of ancient Christian graves literally beneath their feet. The Reformation was in full spate in Europe, and the Council of Trent had only recently concluded its examinations on the need for internal clarification and reform where necessary. An underground city full of martyrs was an extremely timely and welcome discovery to a Church which was on the back foot, so to speak.

But this doesn’t altogether explain the outpouring of emotion and joy expressed in the quotes above. These emotions emanated not from cardinals and the state hierarchies, but from the ordinary people of Rome. Barriers were placed over the entrances to the catacombs to prevent the hordes from pressing in and damaging the fragile tombs.  Processions of catacomb relics to be enshrined in the ancient Roman churches of San Stefano and San Lorenzo were attended by thousands of people singing, weeping, throwing flowers, dancing in the streets. There was a genuine, palpable sense of connection among the 16th century Roman population with their ancient ancestors in faith.

And this sense of reconnection through physical artefacts is something I have also discovered in my own work caring for the hundreds of relics belonging to the British Jesuit Province which are kept at Stonyhurst College. Many of these relics demonstrate their ability to tell their story to succeeding generations, and I should like to share one example.

Stonyhurst College, on behalf of the British Province, cares for the bones of St Gordianus, a Roman judge and convert Christian, executed during the reign of Julian the Apostate. The medieval best-seller, the Golden Legend, related:

if so were that Gordian would not do sacrifice to the gods he should be beheaded, and so his head was smitten off and the body cast unto the hounds, which lay so by the space of seven days untouched. And at the last his servants took and stole it away, and with it the body of the blessed Epimachus, whom the said Julian had slain a little tofore. They buried it not far from the city of Rome, about a mile, and this was done about the year of our Lord three hundred and sixty.

Gordianus was buried in the Cyriaca cemetery, close to the bones of St Laurence, the early Christian martyr. By the time the Golden Legend was written around 900 years later, his burial place was lost, but Gordianus was still remembered as a martyr to pagan intolerance. In 1667 excavations in the cemetery around San Lorenzo uncovered his grave. How the remains were identified is not known, but presumably there was some sort of inscription over his grave. The bones were presented to Fr Christopher Anderton, the Jesuit Rector of the English College in Rome, on 14 May 1667, to be kept in trust for the Catholics of Lancashire ‘until England’s re-conversion’. They were placed in the Sodality Chapel in St Omers College, the Jesuit school for English boys founded in 1593 in what is now Northern France, and the direct ancestor of Stonyhurst College. The Sodality was dedicated to bringing about the conversion of England, and Gordianus was hailed as a martyr executed by his own government, a powerful parallel with the 16th and 17th century martyrs of England and Wales.

In 1773 the Jesuit Order was suppressed and their possessions forfeited. A remarkable inventory was made at the time, describing the contents of the College, room by room, even including the baskets of dirty linen belonging to the pupils. The relics of Gordianus were listed not in the Sodality Chapel, but in the private room of Fr John Carroll, a Jesuit from Maryland, an alumnus and, later, a teacher at the College. It is not known what the relics were doing in his room; quite possibly Carroll felt an affinity with the martyr’s defiance of state-sponsored religious intolerance, which was also the case in his native Maryland where the practice of Catholicism was illegal. It is almost certainly due to Carroll’s American status that Gordianus was not confiscated as so many hundreds of College relics were at this time. Carroll ensured that the relics were safe, entrusting them to the Augustinian nuns in Bruges. Three years later, following the American Revolution, he departed for his homeland to be the first American Catholic Archbishop, and founder of Georgetown University.

Moving to the present day, Gordianus continues to inspire and surprise. Earlier this year his gilded reliquary was sent on loan to an exhibition in Washington DC on the Life and Legacy of Thomas More, told through artefacts from Stonyhurst College and the British Jesuit Province.  The reliquary was included because of its links to St Omers College, where More’s memory was kept alive from the 16th century onwards, and because of its association with John Carroll and the American Catholic Church’s struggle for freedom of worship.

The box containing Gordianus’s bones remained at Stonyhurst, but on removal from the reliquary the ancient ribbons closing the box were noted to have perished. Inside, carefully and lovingly wrapped in lambswool, pink silk and silver ribbon, were numerous ancient bones. The head was missing, confirming the likelihood that the bones belonged to someone who had been decapitated. Labels dated 1700 indicated that some of the bones had been placed in the marble altar at St Omers. The letters of authentication were intact and complete. It was a deeply moving moment; the first time in nearly 250 years that the bones had been seen. They will be reunited with the reliquary casket on its return to Stonyhurst in March 2017, and solemnly replaced under the altar in the Sodality Chapel at the College, with which they have been associated since 1667.

A final footnote. In 1834, the Augustinian Sisters returned the relics of Gordianus to the College, which by then had relocated to Lancashire, and so his remains now lie in the northwest of England, as intended by Fr Anderton back in the 17th century. Gordianus is a long way from home, but his relics continue to provide occasion for the exploration of faith and discussion of contemporary issues of state intolerance, sadly all too evident in the world around us.

Jan Graffius is Curator of Collections at Stonyhurst College.

For details about the programme of events during the visit of the relics of St Margaret Mary Alacoque and St Claude de la Colombière, please visit: http://www.emmanuelcommunity.co.uk/next-events/missiontolondon/