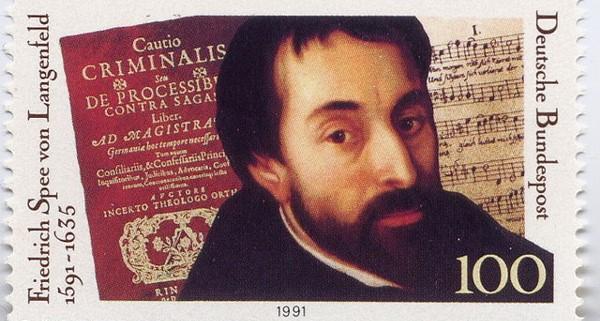 Not all heroes wear capes … or even have the courage of their convictions. Dermot Preston SJ tells the incredible story of a 17th century Jesuit who was missioned to be a confessor to condemned witches and found himself plagued by doubt for the rest of his life after the injustices he witnessed.

Heroes can be depressing. They appear to have everything under control and they take everything in their stride. After reading the obituary of Sir Fitzroy MacLean (an early SAS commando, diplomat and adventurer), one of my brother’s police colleagues commented with a sigh: ‘It makes you feel like an under-achiever.’

Saints can be like that. They can be so impressive in their dedication, certainty, giftedness and bravery that they tempt you to throw in the towel before the fight has even begun.

Some heroes, however, are more compromised and we can sometimes relate better to them. They are not straightforward, and they live in a world which is neither black nor white but filled with shades of grey.

There are plenty of heroic Jesuit saints who leave me breathless in admiration, but I do find I am drawn to pondering Jesuits who haunt the half-shadows: the men who faced moral dilemmas where no clear solutions were on offer and all choices were likely to be compromised and complex. They did their best in the circumstances.

My great English Jesuit hero, for example, is Fr Henry Garnet SJ who was the Superior of the English mission in the late Elizabethan and early Stuart period. Whereas many of his contemporaries (e.g. St Robert Southwell SJ, St Nicholas Owen SJ, etc.) have been canonised, Henry will never be made a saint: he died a martyr’s death but his human reputation was tarnished by the accusations made against him at his show-trial because of The Gunpowder Plot in 1605. Not that he was guilty of the crime, but his decisions (made in a highly charged period of history) were necessarily compromised because he was balancing so many moral demands in real life-and-death decisions he had to make.

The circumstances in Germany in the early 17th century were quite different from those in Stuart England, but a near-contemporary of Garnet shared his instinct to seek integrity in a broken and compromised world.

Friedrich Spee was born in 1591 in the Rhineland and became a Jesuit in 1610. At this time, Germany – already traumatised by the political and religious battles of the Reformation – was moving into the bloody spasm of conflict which has become known as ‘The Thirty Years’ War’, which ran from 1618-1648 and which resulted in the deaths of perhaps 6 million people in the Germanic lands alone.

Powerless in the face of threat and violence, people sought to find meaning in their traumas and looked to conspiracy theories to make sense of their world and search for those who were responsible: the chosen scapegoats for the Germans in the early 1600s were witches.

Human history illustrates that many cultures have beliefs in the powers of magic to heal and harm, and each culture tries to channel and control it by their own lights. The Old and New Testaments carry serious prohibitions on sorcery (in its various guises) because it is tantamount to idolatry. Although the Roman Inquisition probably recorded the first execution for witchcraft in Toulouse in 1275, and St Joan of Arc was infamously burned as a witch in 1431, the greatest numbers of trials and executions for witchcraft in Europe took place between 1580 and 1630, and perhaps half of these were in Germany.

Although many of the European trials were conducted by lay people in secular courts (the Roman and Spanish Inquisitions were very actually sceptical of such proceedings), in 1587 the dubious honour of instigating the persecutions went to two Dominicans who wrote a volume called Malleus Maleficarum (‘The Hammer of the Witches’), which became a bestseller and the working manual for witch hunters in the 16th and 17th centuries. It is arguably one of the most evil books ever published.[i]

In 1627 the Bishop of Wurzburg asked the Jesuits to provide a confessor to condemned witches and the Provincial chose Fr Friedrich Spee. Over the next two years, Spee accompanied over 200 people to their deaths. Spee witnessed at first hand the deep, tragic injustices that were occurring and the tortures that were being inflicted and endured. He later wrote that, of those 200 people, there was ‘not one whom I could have asserted to be guilty, after comprehensive and sane reflection.’ Many were women, but not all. Some were city counsellors, others were priests. One girl was blind; two children were only nine years old.

Eventually it was too much for Spee. He asked to be withdrawn and was re-assigned to other ministries.

In 1631 a book called Cautio Criminalis was published anonymously. It addressed the judges and state officials of the German lands. The book systematically demolished every aspect of the trials, revealing the private vendettas and financial corruption underpinning them and baldly setting out the fundamental contradiction of torture: ‘the accused either confesses on the rack, in which case she is guilty, or she doesn’t confess, in which case she is also guilty because to have withstood such terrible torture she must have been in league with the devil.’

Within a month it was an open secret that the author was Spee, and soon opinions were fiercely divided as to the man and the book. The latter was quickly re-printed and became a counter bestseller to the Malleus.

Spee personally provoked divided opinions among both bishops and Jesuits – one bishop remarked that the Cautio was ‘a pestilential book’. Some of Spee’s opponents wanted him to be thrown out of the Jesuits for disobedience (because he did not get prior permission to write), a move that would have made him singularly vulnerable to the predatory witch hunters. But Friedrich was fortunate to have a very supportive Provincial, Fr Godwin Nickel SJ (a man who later became General of the Society of Jesus), who carefully protected Spee within the institution and resisted all attempts to censure him. The Cautio went on to become one of the key documents to turn back the tide of witch-hunting in Europe.

Nickel missioned Spee to the sympathetic community in Trier, and he returned to the preaching and teaching that he loved. He wrote poetry and edited a hymn book – and he probably wrote the original German hymn we know as ‘All Creatures of Our God and King’.[ii]

Although he was liked and loved by his Trier colleagues, community and students, the moral ambiguity of his role as confessor within the insidious structures of the witch hunts stayed with him. Had he been cooperating with the evil structures? In what ways can you be disobedient and loyal? How can you stand back and not get involved? Could he have done things differently? Earlier?? Contemporary reports indicated his hair had prematurely greyed.

Friedrich died in 1635 having contracted plague while tending the wounded soldiers in the fighting around Trier. He was 44 years of age.[iii]

Witch hunts are not an historic thing. In thin disguise you can see the familiar madness and violence amidst the QAnon supporters in the present-day United States. Twitter and Instagram have become broiling cauldrons of hate and fear in some rural Indian villages searching for witches and paedophiles who are lynched without trial. Adolescent suicides are provoked by vicious anonymous trolls and brave people stand back hesitant of being ‘cancelled’ and pursued.

The questions forced on Spee might seem stark and distant, but in effect each of us is really just a few steps away from the questions that arise from serious moral choices. A few twists of fate and we are on the frontline, sweating and confused. Should I stand silent? Must I get involved? Can I intervene? Do I have the courage to do right? Will they turn on me?

Friedrich Spee – pray for us.

[i] I was first introduced to Friedrich Spee through a powerful article entitled ‘Witness’ by the renowned journalist Neal Ascherson in The Observer in 1987 and my piece draws strongly on this out-of-print article. It was only in recent times that Ascherson explained why he had resonated so strongly with Spee’s predicament. https://www.heraldscotland.com/opinion/15055547.they-horribly-wounded-shot-dead-neal-ascherson-tries-make-sense-traumatic-wartime-memory/

[iii] An excellent monograph on Friedrich Spee and his times (‘A Jesuit in the Crucible’ by Ronald Modras) can be found in Studies in the Spirituality of Jesuits (Sept 2003) (pdf available online).