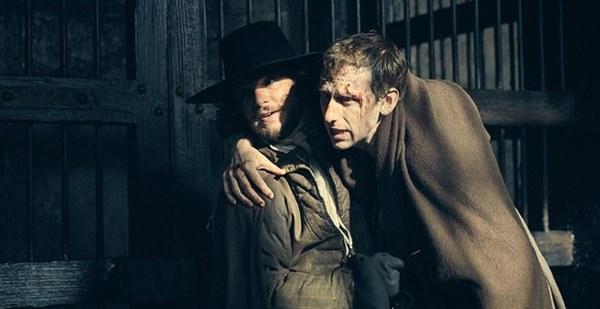 This really is becoming something of a dog’s dinner.

Except for the central fact that a group of blokes are planning to blow up the English parliament, the details of Gunpowder are becoming somewhat disconnected to the known facts of the Gunpowder Plot. People and places are adrift, incidents and portrayals are going badly out of focus, and time is bending more than in an episode of Star Trek.

As in episode I, the production values of episode 2 are high, and obviously money has been poured into set-design, style and costume reconstruction, etc.; but it would appear that Gunpowder’s research team has been starved of funds.

Come on, guys, let’s be honest – even checking Wikipedia would have helped.

After a close look at the credits, I couldn’t help but wonder whether this enterprise is something of a vanity project for Kit Harington, the man who plays Robert Catesby. Harington, who has star power now with the success of Game of Thrones, is the executive producer and he is always to be found front and centre of the on-screen action, even when (in reality) Catesby had nothing to do with a particular event.

The line-up of the plotters themselves probably indicates an underlying bias. How many of the cast are ‘Friends of Kit’, I have no idea, but even though they all carry the names of real people involved in the plot, in Gunpowder their group has morphed into a vehicle for what you might envisage as a One Direction reunion. The boys all dress up, there is much brooding and growling about the persecution, they hug one another, take oaths together, mount horses and sit around the darkly-lit taverns complaining. But there is no depth or variety to them – they all blend into an amorphous lump of Wrights, Wintours and Digbys.

A good example is Thomas Percy, whom Fr John Gerard in his 1606 ‘Narrative of the Gunpowder Plot’ describes as ‘of age, near fifty, as I take it, for his head and beard were much changed white’. In Gunpowder, Percy is portrayed as a noble-about-town in his early 30s. As are they all. Would it not be possible to have an old plotter, or would this sit badly with the advertising posters? Daniel West, who plays Percy, happens to be the co-producer and co-creator of the series.

In fact, from the Jesuit point of view, episode 2 moves into an almost criminal misrepresentation of John Gerard.

In reality, Gerard was a remarkable person. By the time of the Powder Treason, he was in his early 40s and had been on the English mission for over 15 years. He was charismatic, confident and resourceful.

One example will suffice for many: when Gerard first landed on the coast of East Anglia (wet, bedraggled and far from London) he had the big problem of how to get inland quickly in a part of England that distrusted strangers and was on the lookout for priests. So he struck on the idea of avoiding the roads and set off running across fields, and whenever he came across a group of people he would ask them, breathlessly, ‘Have you seen my hawk?’ This immediately set the hearers at ease, and they plied him with sporting advice and conflicting destinations to pursue. He blagged his way past an early arrest by suspicious guards outside Norwich, and made for the nearest pub where he was recognised and taken in by a local Catholic.

Gerard was a master of disguise and he often sat in taverns, skilfully playing cards to open conversations about God. He carried a sword, had a horse and groom, and was often mistaken to be a handsome secular gentleman from the minor nobility. In reality, Gerard’s priestly ministry across Norfolk and the Midlands became legendary as he guided the uncertain, reconciled the estranged, and gave strength and confidence to the faithful.

Gerard was actually captured in a raid during Elizabeth’s reign (1594) and spent over three years in captivity. At first he was in The Clink in the City of London, which was relatively open and full of Catholics; he openly ran it as a parish and people came from miles around for the sacraments. He even converted the gaoler.

Eventually Gerard was moved into the close confinement of the Tower and was manacled (the torture that succeeded the rack). However, through a combination of dedicated Jesuit brothers, lay people, his gaoler from The Clink (!) and a Catholic noble with a cell on the outer edge of the Tower, Gerard escaped almost-certain death by dangling over the fortress wall and moat, and tumbling into a boat on the swiftly-moving Thames. As Graham Greene pointed out in an introduction that he wrote to a 20th century edition of Gerard’s autobiography, the priest’s life reads like a thriller.

By the time of the Gunpowder Plot, Gerard had been back in active ministry for six years. He was a battle-hardened apostle of the word and sacrament and, having been to hell and back already, was unperturbed should God need him to return to captivity. Gerard was deeply against any plotting of violence and, a year before the Gunpowder Plot, had sent word indirectly to the government that with another plot (Main/Bye), people were seeking the death of the new king.

This well-attested-to portrait doesn’t work for the team working on Gunpowder. Instead, screenwriter Ronan Bennett, has transformed Gerard into a petulant teenager who seems to be uncannily based on Pitt-the-even-Younger in Blackadder III.[i]

Thus, after a little bit of grimacing and foot-stamping, Gerard storms away from Fr Henry Garnet and throws himself in with the plotters. Gerard and The Boy Band all meet in a tavern that is then raided by William Wade, the Lieutenant of the Tower, and a sword fight between Catesby and Wade ensues. As The Boy Band escapes, Gerard is captured, borne off to the Tower and is duly racked (by William Wade, shirt sleeves folded up), with Robert Cecil sitting on a throne in the corner of the dungeon.

Catesby then decides that it is important to rescue Gerard from the Tower, so he does it himself. Thus by wearing a different cap, he manages to breeze past the guards at the front gate of the most secure castle in Christendom, finds his way to the cell, carries Gerard off, fights with the guards, sticks Gerard into an open drain (a potential security breach previously unnoticed by the Tower authorities) and off they go, into the night.

I hesitate to see what they will make of Fr Henry Garnet in Episode 3.

‘Based on fact’, or ‘based on a true story’ as the blurb might have it, but not actually a true story? If you treat facts in so cavalier a fashion, then surely anything is acceptable. If we are twisting British history that much, perhaps Robert Cecil could order Battle of Britain ace, Douglas Bader, to strafe the Catesby home at Ashby St Ledgers using a squadron of Spitfires? It would look good on camera; perhaps Catesby could stand on the roof and wave his sword about and bring down some of the aircraft with his charisma?

I had wondered why the team behind it chose the single word ‘Gunpowder’ for the title of this series. It seems clear now that it is because they have lost the plot.