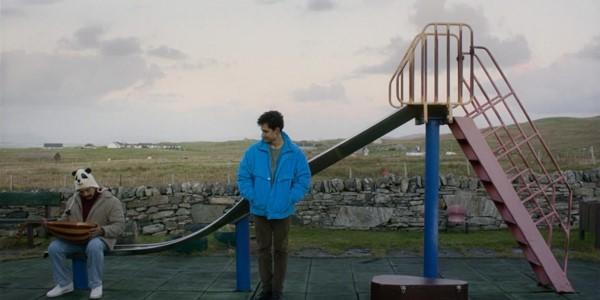 ‘How can we sing the Lord’s song in a foreign land?’ the psalmist asks (Psalm 137:4). It’s an idea that resonates throughout Limbo, a new film by director Ben Sharrock. Omar (Amir El-Masry) is a Syrian musician who has fled the civil war in that country, and is now sharing a house with three other refugees on a wind-swept island in the Outer Hebrides while they wait for their asylum claims to be processed. Regarded by the local people with bemusement and incomprehension, rather than with much outright opposition, they have little to do but wait more or less patiently, call home from a bleak public telephone-box, and watch endless episodes of Friends on DVDs supplied by a local charity (which, however, classifies coats as a ‘premium item’).

Sharrock has said that in his view refugees are usually looked on with either distrust or pity, and that he wanted his drama to offer a truer alternative picture. Before filming, the cast spent some time over a number of weeks talking with a men’s group of asylum seekers. They were struck, above all, by the humour, and lack of self-pity, to be found among the men. The same vein of dry humour runs through the film. When the highest aspiration of most of the refugees here is to find work as cleaners, or get a little cash-in-hand illegally by helping out in the local fish-processing plant, one nevertheless confidently expects to be playing as number 11 for Chelsea FC in the near future. Another idolises Freddie Mercury, naming a chicken he adopts after him. There is pathos in the film, but the wit in the script (also written by Sharrock) keeps the viewer mostly clear of outright pity.

The Jesuit Refugee Service in Britain regularly speaks of ‘our refugee friends’, and it’s an outlook that finds echoes here. These are men, not statistics or case-files, but real individuals with their own hopes and fears, strengths and weaknesses. Omar is rarely separated from the case containing his oud, a lute-like instrument handed down from his grandfather who was a famous player in Damascus. Although it is recognised by himself and others to be Omar’s ‘thing’, what marks him out, we are left wondering whether he will ever play again. He returns repeatedly to a film-clip on his mobile phone showing him taking to the stage in Syria before his adoring family. But even tuning it up in the Hebrides, to his ears the oud doesn’t sound right.

This is Sharrock’s second feature film. His first, Pikadero, released in 2015, was written in English but shot in the Basque language. It portrays the trials of a penniless twenty-something couple at a turning point in their lives. The film shares with Limbo a rich strand of humour and also a distinctive pictorial language – Limbo draws strongly on the colours and textures of the Hebrides, particularly in its winter scenes. Pikadero, made on a tight budget, was shown at more than 40 film festivals and won numerous awards, and Limbo was an Official Selection at the 2020 Cannes Film Festival, although it fell victim there to Covid restrictions.

Amir El-Masry’s character, Omar, is at the centre of this story. He has the knack of looking like a fresh-faced youngster at one moment, delighted that the local shop-keeper has managed to procure the particular spice needed for one of his mother’s recipes; and a haggard defeated victim at another, crushed by a discovery made while helping a local shepherd round up his straying flock. There are scenes where he says very little, speaking slowly but conveying much by his silence. He contrasts well with his room-mate, Farhad, the chicken-loving Freddie Mercury fan, played by Vikash Bhai, who has largely managed to maintain an ebullient optimism over the empty months and years.

Although the tone of Limbo is very different from that of another selection for this year’s London Film Festival, Farewell Amor, also reviewed in Thinking Faith, both films offer an implicit condemnation of the wastefulness of an asylum system that keeps talented individuals, with much potential to contribute to the societies where they end up, in an impoverished stasis for years, sometimes decades, while their cases are assessed. Not allowed to work, and forced to rely on charity, they are left in a between-two-worlds condition that benefits no-one. If dramas like these can bring that awareness to a wider audience, they will have performed a great service.