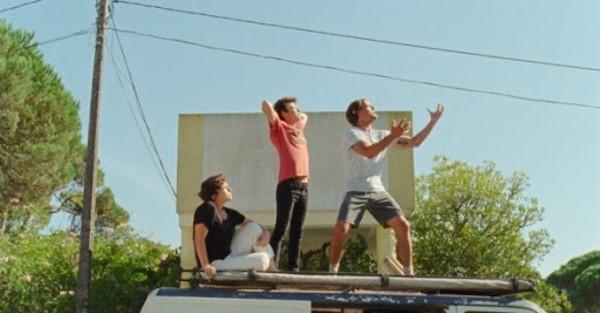 What do you do when you’re in the middle of making a film, and a national pandemic lockdown is instituted? Two Portuguese directors, Maureen Fazendeiro and Miguel Gomes, responded by putting their existing plans on hold in order to set about investigating what might be possible with three actors and the limited crew that they had available. The result is The Tsugua Diaries, an innovative account of one experience of Covid isolation.

As the title indicates, this takes the form of a filmed diary, detailing a period of a little over three weeks in late summer 2020, with an entry for each day. Crucially, these are presented in reverse order – the ‘Tsugua’ of the film’s name is August reversed. The film starts with ‘Day 22’ and counts back down to ‘Day 1’. This has a curiously disorientating effect. Early in the film, there is a day when the characters take time to observe butterflies closely. Later comes a diary entry where they work together to construct a butterfly house and, later still, scenes of them scavenging from an abandoned cellar the building materials they need to construct the enclosure. Miguel Gomes has remarked that this is actually two films in one – the one that you see unfolding on the screen, and the one of the story moving forwards as you reconstruct it in your mind.

The individual scenes appear to present whatever was most memorable to the characters on any given day, seemingly without any great attempt to weave them into a single narrative. On one day, for instance, they discover an old tractor in a barn – the setting of the film is a large country villa, complete with gardens and out-buildings – and that day’s diary extract centres around the fun involved in getting it up and running, and then riding it. The tractor doesn’t appear elsewhere in the film, either earlier or later, but is presented as a memorable ‘happening’ in the experience of those involved. The environment in which the film is set is attractive and the three characters present from the outset are engaging, so there is much to retain the attention even without an obvious storyline.

Having said that, the production is not without its surprises. After a half-hour tightly focused on two men and a woman, glimpses from the corner of your eye, as it were, begin to suggest that there might be others in and around the villa. As the days of the diary continue to count down, this leads to changes that invite the viewer to re-assess all that they have seen up to that point. To say more would run the risk of spoiling the experience of those viewing the film for the first time, but the result is that, by the end, the production feels very different from any initial impression.

The promotion material for The Tsugua Diaries suggests that it will challenge the viewer’s understanding of cinematic storytelling. I am not sufficiently well-versed in the history of cinema to be able to judge that. But those familiar with Ignatian spirituality, and particularly that prayer-form known as the examen, will note resonances here. Like that prayer, the film is rooted in recall, looking back over a period of time and reliving key moments. As in the examen, these moments are selected by the vividness of the impressions that they leave, rather than on any predetermined hierarchy of importance. Another parallel is the fact that in the looking back, connections are made that were perhaps not evident at the time, and pondering those connections yields a greater sense of meaning. The film, too, deals with ‘lights and shadows’ – from the simple pleasure of watering plants on a warm afternoon, to a debate, repeated twice verbatim between different pairs of characters, about the isolation caused by lockdown – is this a painful deprivation to be overcome as soon as possible, or might it offer, for some at least, a welcome break from overextended lives of social interaction?

No doubt, over the next few years, there will be many films that try to make sense of the current experience of global pandemic. What may make The Tsugua Diaries among the less common, if not unique, is the way that it was conceived and completed from within the experience of lockdown. To be able to do that, while also presenting something that is visually attractive and conceptually intriguing, is no small achievement.