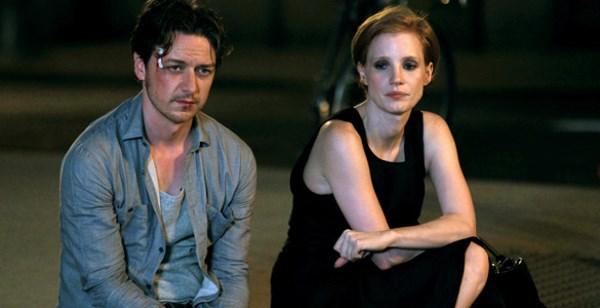 Aside from the name of Jessica Chastain’s character, this film bears no relation to the song recorded by The Beatles in 1966 or to the brief story told by its lyrics. This Eleanor Rigby is a modern-day New Yorker, estranged from her husband (James McAvoy) and, as we come to learn, grieving over the death of their infant son.

The suffix ‘Them’ in the title warrants explanation. Writer/director Ned Benson set out to make two films, The Disappearance of Eleanor Rigby: Her and Him, which would tell the same story from the points of view of ‘Her’ (Eleanor) and ‘Him’ (husband Conor).  He did so, and the two films have been screened back-to-back at various film festivals and in select US art-house cinemas. However, faced with the limited commercial appeal of this format, Benson decided to take scenes from each film and combine them into one, shorter effort, and it was this film that was screened at the London Film Festival.  At the time of writing, no information is available about a wider UK release date, but this reviewer expects – and hopes – that this truncated version will get a general release.

The story is told in a not-quite-linear fashion: most scenes take place in the here and now, but the occasional flashback serves to illustrate that Conor and Eleanor were once love’s young dream. The details of their tragic, recent past unfold gradually and obliquely through conversation. What we observe is not so much a series of events as a careful study of two people in the fallout of the earthquake that has torn them apart. Yes, there is the occasional aftershock, but on the whole the events are muted and short on melodrama.

It may have been a little misleading to sever the link between the song and the film completely.  Eleanor’s professor makes one tongue-in-cheek reference to the song after which her student is named when she remarks: ‘All the lonely people/ Where do they all come from?’ It is an apt quotation: loneliness is the fault-line running through this film. We watch two people, both surrounded by friends and family, descend into solitude (one deliberately, the other less so). As such it is as much a meditation on the afflictions of thirty-something urban life as it is on grief, and is very moving in both regards.  Such a film is always in danger of coming across as a bit self-indulgent, and The Disappearance of Eleanor Rigby might have done so were it not so well-acted.

McAvoy and Chastain are brilliant: natural together and fully present to the audience at all times, they make Conor and Eleanor a couple for whom a viewer can feel both agony and joy. An excellent supporting cast – especially Viola Davis as Eleanor’s cynical professor and Ciarán Hinds as Conor’s distant father – allow the characters’ relationships to function as shorthand in the telling of what has gone before: unspoken histories are still conveyed effectively.

I would happily carve out another three-and-a-bit hours to watch the Him and Her versions, not least because I am curious to see what difference it makes to tell Conor and Eleanor’s stories in isolation. I wonder if it would serve, for better or worse, to shape the characters more in relation to one another, each defined by their separation from their spouse. In Them, they both seem to be haunted by an absence, but not necessarily the absence of the other – perhaps the juxtaposition of their stories serves to draw more attention to the chasm between them than separating them ever could.

This may not prove to be an important or ground-breaking film, but it is a good film. Not that actors should always be trusted to give the most accurate appraisal of their own films, but McAvoy was spot-on when he said that Benson had created a picture of a contemporary relationship that was real, but beautiful and poetic at the same time. To draw one further distinction between film and song: The Beatles concluded Eleanor Rigby’s story by singing that ‘No one was saved’; I would not be so quick to condemn these characters to the same fate.