Skip to main content
Photo of Accrington Pals by Ian Thorpe/Photo of jobseeker in Burnley by Andreas Andrews, both at flickr.com 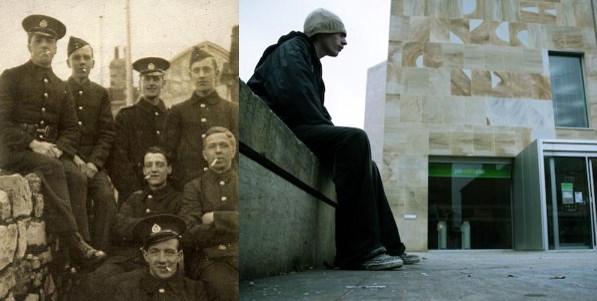 The town of Accrington, home to over 300 men who were killed on the first day of the Battle of the Somme, is an example of a community who were defenceless against the juggernaut that was World War I. 8 miles north-east and 100 years later, we find an example of a community that is just as vulnerable to a new force but has responded in a different way. The Jesuits in Britain’s Provincial Fr Dermot Preston reflects on last week’s referendum result through the lens of his hometown of Burnley.

Picture this: a 44-year-old Englishman standing in the dock of the court in Mansion House in London. The charge? Publishing a leaflet supporting conscientious objection to military service in the British army. Despite an eloquent defence of his position, he was fined £100.

On that very same day, 5 June 1916, across the continent on the Eastern Front, a 27-year-old lance corporal in the Austro-Hungarian artillery was in action against the Russians. For his leadership of the gun battery on that day, he was given the Empire’s Silver Medal of Valour, a rare honour for a non-officer.

These two men are symbols of what was to come. Bertrand Russell and Ludwig Wittgenstein, friends and philosophers, had just three years earlier been teacher and student at the University of Cambridge, searching for truth and the meaning of life. Now they were separated by a gulf across Europe. By early June 1916, the First World War that had successfully divided a generation of Europeans was about to slaughter them.

Unity in Europe was not a lesson that was learnt easily; it took the butchery of yet another generation of young men in the Second World War for deep and long-lasting treaties and agreements to forge the infrastructure for a new Europe. Did it work? One fact: from 1900 to the end of the Second World War, 60 million people died from conflict on European soil; from 1945 until today, an estimated 6 million people have died from conflicts. It worked.

A century later you can see the working of the 1916 juggernaut by looking through the lens of just one small town in England. Lord Kitchener’s call for battalions of friends to volunteer for the First World War was heard in Accrington, a mill town in North East Lancashire. The Accrington Pals was a Kitchener Battalion: formed in 1914, just two years later they had crossed into mainland Europe and they spent the month of June 1916 preparing for the much-vaunted ‘Big Push’ across German lines on the River Somme in Flanders.

On the morning of 1 July 1916, in the hour from 6.30am to 7.30am, along a 25-mile stretch of the front, a quarter of a million shells (3,500 a minute) pounded the German positions on the Somme. The rolling barrage was heard on Hampstead Heath in London. When the officers’ whistles sounded the ‘all clear’ from the artillery, the infantry emerged from the trenches and battle began.

The Accrington Pals came out into the smoke and barbed wire and they walked into No Man’s Land with the early morning sun shining into their eyes. Before 8 o’clock they had been annihilated by enfilading German machine-gun fire. Over 300 men from Accrington were killed on 1 July 1916.  Many more were wounded and maimed.

The survivors returned to the town in dribs and drabs over the weeks and months that followed. Most often they kept the stories of shock and horror bottled up because the town to which they returned was still living in the myth of war, and the early looks of incomprehension quietened them. With no National Health Service or social security, State compensation and after-care was minimal. For the decades to come the veterans, scarred both physically or mentally, would on Remembrance Day in the town, in silence and with pride, parade remembering their lost colleagues. Their numbers dwindled as the conflict became a distant memory.

The Accrington Pals were just a fraction of the 19,000 men of the British army who died on that first day of the Battle of the Somme, but their story opens our eyes and ears to the tragedy of the voiceless in that conflict. The loss of the Accrington Pals was a passing statistic for the juggernaut, but it ripped out the heart of the town. The British Government did nothing for them. But neither did Germany or France for their survivors.

One hundred years later, let us move 8 miles down the road to my home town of Burnley. On 23 June 2016, 66% of the town voted for Brexit. Why? The elements will be complex. It wouldn’t be that they like Boris or the sinister Nigel; nor would it be a dislike of Europe! No, Brexit in the town was primarily a protest vote: a inchoate scream against those with power and money who have forgotten the town over the years.

Burnley, with its mining and woollen mills, was a key manufacturing town during the Industrial Revolution and was a Labour Party stronghold for as long as anyone could remember. But in the last 35 years the party has gradually distanced itself from such post-industrial towns in the North and Midlands, preferring to spend more time focusing on other, more prosperous dimensions of British society which allow it easier access to more direct sources of power and influence.

In the town the factories disappeared and job opportunities became fewer. It began to fill with strangers, people from India and Pakistan (Why? Who decided?) and although some of these people became part of the community, most others kept together and socialised apart; and because of cultural differences, they appeared to be unfriendly to the locals. Apartness seeded frustration and suspicion, and fuelled tensions. Riots followed and the Government in its wisdom decided to build new schools. (Why? Who decided?)

In 2007, the Labour Government closed the Accident & Emergency unit in the town and moved it 12 miles away (!) to a hospital in Blackburn (Why? Who decided?), and then the sitting Labour MP had problems with the declaration of her personal expenses. These combined were something of a last straw and, in 2010, the town voted in a Liberal Democrat as an attempt to rattle the cage of the powers-that-be.

The difference between East Lancs in 2016 and East Lancs in 1916 is that the people there no longer trust the politicians, the businessmen and the celebrities who advertise The Establishment Plan. The Accrington Pals listened to the calls from Members of Parliament, the Lords of Industry and the stars of the Music-Hall, and they marched enthusiastically into Belgium without knowing that the European Establishment was already co-operating across the lines of war to make sure the war machine worked more smoothly. For example: the 32,000 military binoculars used by the British on the Western Front had been bought by the British Ministry of Munitions in 1916, supplied by Zeiss Opticals, in a deal brokered by the Swiss and authorised by the German War Office. The German reward? British rubber to aid their war effort.

The referendum on 23 June was an unusual, unique and unexpected offer to the people of Burnley: an ‘on/off’ switch for the juggernaut was tantalisingly dangled in front of them with clear instructions from the creators of the juggernaut to say ‘on’. David Cameron, Richard Branson and David Beckham said ‘Remain’, but as the status quo wasn’t doing much for the people of the town, and hadn’t done much for a good number of years, why not just switch the machine off and see what happens? Much to their surprise the machine stopped.

I feel strongly that an integrated Europe which knits us together and values difference is a goal that all should seek, because it is a goal that fosters peace and companionship in a fragile world. But the Brexit vote from the Shires is a warning to all the political parties in this land. Europe, too, cannot rest in its smugness of prosperity; before it is too late it must take heed and seek out the forgotten and disenfranchised in the towns and villages across the continent and listen to the cries of the poor.

The UK and the Eurozone