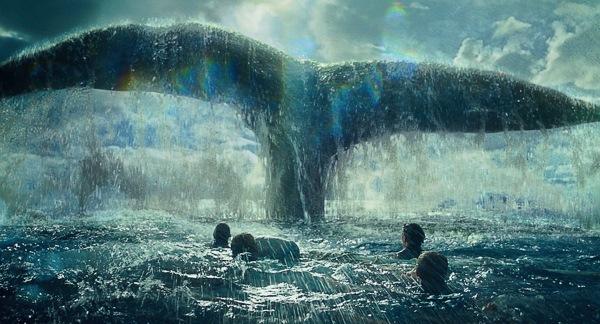 In 1820, an American whaling ship was attacked and sunk by a large sperm whale, an event which in part inspired, 30 years later, the writing of one of the greatest American novels: Herman Melville’s Moby-Dick. In the Heart of the Sea recounts the story of the ill-fated last voyage of the whaleship Essex and the subsequent ordeal faced by her crew stranded in the middle of the Pacific Ocean.

In the film, this story is narrated by Thomas Nickerson who, having served as cabin boy on the Essex, has never spoken of the ordeal. The young Herman Melville, looking for source material for his new novel, desperately seeks out Nickerson, the sole remaining survivor of the Essex; this situation, however, is not based on fact, as both the captain, George Pollard, and the first mate, Owen Chase, survived until long after Moby-Dick was published. Not only that, but Melville refers directly in his novel to Chase’s published account of the sinking of the Essex and even quotes from it. The intention of making the narrator the only living survivor of a sinister event may have been to imbue the tale with a further sense of mystery and urgency, but in this case it has misfired. However, having the youngest crew member tell the story of his first voyage as an older man is effective, especially as one of the more harrowing parts of the tale is not shown on screen but rather related through the effect it has had on the man who experienced it. And although Brendan Gleeson plays the older Thomas Nickerson very well, I wish he had been played by someone appearing to be closer to his 45 years of age, since we are told that Nickerson was 14 when the Essex sailed from Nantucket in 1819. Although this may seem a minor detail, it is representative of the film’s cavalier attitude towards attention to detail.

For a film about human perseverance and the savagery of nature, In the Heart of the Sea is rather dull. The plot drags, the script is clunky and the actors often seem uncomfortable with the language. There is, furthermore, a debilitating lack of any unifying theme. There are glimmers of hope in some potentially engaging ideas – a sense of superiority that Nantucketers display towards other sailors; the interpersonal conflict between the captain and first mate; the question of man’s relationship with God and the rest of creation – but all these are only touched on superficially and never resolve themselves into anything more useful or interesting.

By contrast, Chase’s 1821 account, as well as being a detailed narrative of the daily occurrences and practical measures of which he kept a faithful record, reflects on the actions and attitudes of himself and the rest of the crew, and is in that sense a poignant study of hope and despair, of desperation and endurance. And pervading his entire story is an unshakeable faith in God. Not that portraying Chase’s or any other crew member’s sense of faith could have saved the film, but it does provide food for thought. Why do we tell stories, especially stories like this which involve human suffering the likes of which most of us will never experience? Though this is obviously a question that could be answered in several volumes, I would say, essentially, that stories connect us to one another and help us to understand ourselves as individuals and as a human race. What good, then, is a story that does not attempt in some way to plumb the human heart and mind?

Even the story’s relationship to Moby-Dick is not used to great effect. It seems mainly to be a tool for introducing the narrator, and in the end the film seems to imply that Moby-Dick is merely a retelling of the story of the Essex with the more gruesome bits left out. In the Heart of the Sea is not a bad movie, but it could have been so much more.

In the Heart of the Sea - Official Trailer 3 [HD]

Summer in the Forest