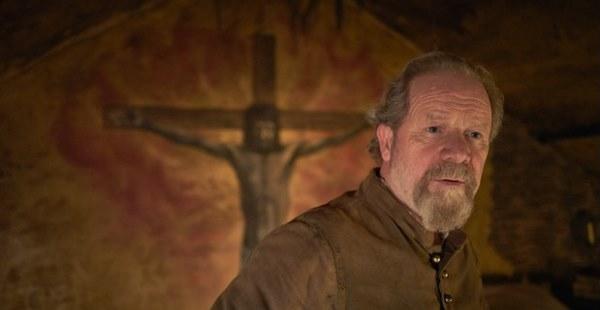 The opening half of episode 3 of Gunpowder was a vast improvement on the episode that preceded it.

Thankfully it kept fairly close to the broadly known facts, and was a simple but presentable visualisation of the events. It covered the final loading of the parliamentary undercroft with barrels of explosives; the breakdown of the Gunpowder Plot (either via an anonymous letter to Lord Monteagle or a creative twist hinting at betrayal by the Spanish); the fleeing of the plotters to the Midlands; and then their death/capture following their last stand. Robert Catesby was portrayed as dying from injuries sustained during the siege of Holbeche House, as he did in real life.

Kit Harington has been quoted as saying that he wanted to tell the story of the plot with his ancestor, Catesby, in his rightful place at its centre; an interesting idea, but in order to facilitate this the rest of the characters have been re-written to fit in with that aim, to varying effects.

So, overall, how did they fare? Robert Cecil was played intelligently by Mark Gatiss, and Derek Riddell as King James brought out some of the cunning ambiguity present in that monarch. Interestingly, because she didn’t need to say or do much but wring her hands a lot, Liv Tyler preserved Anne Vaux’s dignity, even if her colourful backstory as one of the most revered and resourceful protectors of the Catholic clergy was left neglected.

Two archetypal ‘enforcers’ (one for either side) were created for dramatic effect. A Jesuit would not have much natural sympathy for Sir William Wade (Shaun Dooley), but even I found myself having pity for the damage done to his legacy by Gunpowder’s reduction of him to a psychopath in Cecil’s employ. Wade certainly had history as a determined priest-hunter, but in Elizabeth’s day he became one of England’s top foreign diplomats and this led to his appointment as Lieutenant of the Tower by King James. In reality, Lady Wade developed a real respect for Fr Garnet; as he was leaving the Tower for his execution, she called, ‘God be with you, and comfort you, good Mr Garnet. I will pray for you.’ Henry responded, ‘I thank you good madam, and for your prayer; you might keep them at this time and if it pleaseth God to give me perseverance, I will not forget you in my prayers.’

Guy Fawkes (Tom Cullen) fared badly in a similar way to Wade: the script turned him into a Jason Statham-like assassin who said little, menaced a lot and did the dirty deeds for which the rest of the plotters had no stomach. Poor Guido. Oswald Tesimond, a Jesuit priest who knew the plotters and went to school with Fawkes in York, described Fawkes as, ‘pleasant of approach and cheerful of manner, opposed to quarrels and strife... ‘. Not that you would guess it from Gunpowder.

If the first part of episode three chugged along brightly enough, then the wheels fell off the wagon half way through, and it was that here the lack of research and the insensitivity to the source material made it quite painful to watch. From a Jesuit point of view, if the scriptwriters did a hatchet job on Fr John Gerard in episode two, their portrayal of Fr Henry Garnet in episode three was unrecognisable.

Throughout the series, Garnet (Peter Mullan) is seen as a shambling and retired man in his 70s and although Garnet came from Derby, Mullan doesn’t hide his natural Scottish burr. At the beginning of the series, we met Garnet in hiding in Baddesley Clinton, but ever since he is seen merely pottering around a candle-lit garret somewhere in London. He seemed to spend a lot of time staring broodily through frosted glass windows and waiting for the occasional visitor.

In the final stages of Gunpowder, on the eve of his capture, when the priest-hunters are closing in, Garnet finally turns to Anne Vaux and solemnly explains his raison d’être: everything, he says, earnestly putting the essence of his life into a single sentence, everything he has done has been done for… the love of Anne Vaux.

Everything that Henry Garnet had done, he had done for the love of Anne Vaux?

For his love of the living God? No. For his faith in the Church? No. To preach the good news to the people of England? No.

I leant forward in my seat, nostrils flaring; I imagined Jesuit shoes, slippers, boots and sandals being collectively thrown at television sets up and down the land.

At his death in 1606, Garnet was a mere 51 years old and had been master-coordinator of the English Catholic mission for 20 years. He was fearless and calm, and energetically toured the country ministering as a priest and organising the underground Church. He was beloved by Catholics and with gentle good humour and wisdom, he steered the Jesuits through their many challenges and responsibilities. Because of his role, he was at the forefront of the religious and political issues of the day – seeking reconciliation and practical solutions for complex moral circumstances. Anne Vaux (along with her sister, the redoubtable Eleanor Brooksby) ran the safe-houses that were used by Garnet and the priests in the Midlands and London.

So, as well as failing to grasp his spirit and soul, what else did Gunpowder miss about Henry Garnet and his role in the plot?

His capture? Just outside Worcester, where it took a concentrated two-week search and a near gutting of Hindlip Hall to find the four Jesuits in hiding. His show trial? It was one of the most important trials of the decade. It took place in the Guildhall in London with the Attorney General prosecuting, and even the king was present behind a curtain. His execution? In its final scenes, Gunpowder portrays Garnet being carried all bloodied and, in front of a baying crowd, dying with Fawkes and the remaining plotters.

The reality was far more telling.

Garnet was executed not at Tyburn with the plotters, but much later and alone at the churchyard outside St Paul’s Cathedral. A huge crowd was expected, and a huge crowd came. People were erecting terraces and being charged 12 shillings (a princely sum) for a seat on the day. A disguised priest who witnessed the execution had to pay that amount to stand on a wall. Every window with a line of sight on the churchyard was occupied.

On the scaffold, Garnet was composed and saluted people he recognised, ‘very kindly and cheerfully'. The Government Recorder tried to question him about the plot, but Garnet was clear that he had been strongly against it and that his only knowledge of it was through confession, and that seal he could not break. The debate became rather comic when the Recorder overplayed his hand by claiming that Garnet had signed a confession. Garnet promptly asked to see it, only to be told lamely that it appeared to have been left at home... At this point, John Gerard’s narrative says, ‘divers of the standers-by laughed in their sleeves.’

Garnet then prayed for the king, queen, prince, the council and the whole state. When the hangman pushed him out to swing on the noose, the people were all quiet, ‘much moved with his modesty, constancy and his protestation of innocence at his death.’

When the hangman made to cut down Garnet so that he could be disembowelled alive (as was thought fitting for a traitor), the crowd cried out that he was not to cut him down too soon. The second time that the hangman made a move, the cry went up, ‘Hold! Hold!’ Then a third time. Eventually someone in the crowd came and swung on Garnet’s legs to hurry the process.

The executioner finally began his butchery on the body, and when he held up Garnet’s heart and shouted to the crowd, ‘Behold the heart of a traitor!’ there was no applause or cheering.

John Gerard’s narrative concludes by saying, ‘Yea, so strange and unexpected an alteration there was in the very heretics themselves that some of them said, without doubt he was in heaven. And generally the people went away much satisfied of his innocency and sanctity.’

If much has been made in the media of the ‘accurate historical research’ behind Gunpowder, it now seems clear that this research has focused on the minor practicalities (e.g. How did the king go to the toilet? How does one pronounce ‘Vaux’? How is a doublet worn? Etc.[i]). Of course, it is good to get such things right, but that sort of research should really be secondary to a robust scrutiny of an essential narrative arc that is purporting to be historic.

What has been disappointing across the series is the scant attention paid to the role of religion in general and the religious schism in England at the time. The underlying clash of the Reformation in England is not explored in any way, shape or form, and the ‘Catholics’ and ‘Protestants’ could have easily been named Capulets and Montagues – or Romulans and Klingons, for that matter – for all that it meant to three hours of television time.

Broadcast around the 500th anniversary of Martin Luther’s protest, Gunpowder was a lost opportunity to try to write an intelligent, lasting piece of work on an intriguing canvas. Robert Bolt did that in A Man for All Seasons[ii], as did John Osborne in Luther[iii] and both completed the task in under two hours. Get hold of a DVD of either of those films and savour some serious drama.

'The Nativity', Part One: A love triangle like no other