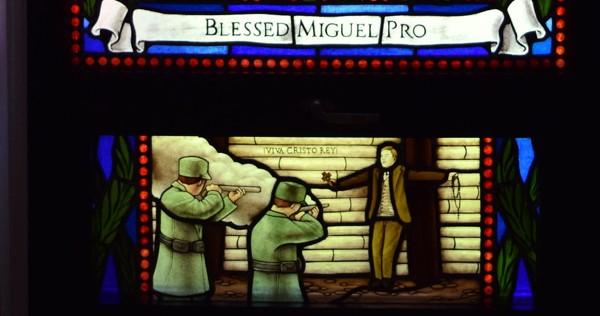 The connection that Philip Harrison SJ feels to a Mexican Jesuit martyr was initially mediated by one of his contemporaries, and now encompasses all of those who witness to their faith through vulnerability and strength.

As autumn turned to winter and the leaves faded to brown and fell to mush on the ground at Manresa House, the Jesuit novitiate in Birmingham, we entered the season of martyrs. Outside, the weather turned sour and the leaf mould piled up, but inside the dry pages of the missal came to life, putting us in touch with those Jesuit saints and blesseds who had given their lives for the gospel in every season. At the daily Mass in the novitiate chapel we listened attentively to homilies about doorkeepers and carpenters, tennis players and explorers, trying to understand what it took to be a Jesuit. We became acquainted with the honourable ways they had lived and, for some of them, the horrible ways in which they had died. We also took our first stuttering steps in preaching, and listened with intent to each other so that we could hone our craft.

The homily I remember most clearly was given on the feast of Blessed Miguel Pro who was killed in defence of the faith in Mexico on 23 November 1927. He was the son of a miner, who became a Jesuit and ministered faithfully to his people in the midst of a violent repression of Catholicism under President Plutarco Elías Calles. In the chapel at Manresa, the novice began to recount the details of Pro’s life. When he reached the moment when Miguel Pro was put before a firing squad, he began to describe vividly how Pro stretched out his arms and cried out in a loud voice, ‘Viva Cristo Rey!’ (‘Long live Christ the King!’) before he was shot. Just at that moment, as he was preaching, the novice stretched out his hands in the chapel and shouted the same words as Miguel Pro. I felt then, and I still do, connected with the martyr in a gesture of vulnerability before violence, expressed in words at the same time as an affirmation of the strength of Christ. One of the most important lessons that I have learned as a Jesuit is that vulnerability and strength are not incompatible. What closes the gap between them is courage.

In the late 1930s, Graham Greene visited Mexico in order to observe the repression of the Catholic Church at the hands of the country’s president. He travelled through a landscape of devastated church buildings and communities ravaged by fear. It would become the setting for The Power and the Glory, one of his most famous novels. In the prologue to the account of his travels, he claimed that it was ‘the fiercest persecution of religion anywhere since the reign of Elizabeth.’ Although some parts of our society are hostile to the gospel, the greatest threats to the Church in recent years have come from within the Church. The abuses of power have hollowed out the Church and left us vulnerable. Yet in the midst of that trial many of you – translating a thinking faith to a generous love – have stood with arms open wide to bear witness to the truth of the gospel, unafraid of the consequences. Just like the witness of Miguel Pro, your testimony inspires me.

Many years later, after I was ordained, the memory of that novice’s homily came back to me when I was celebrating the Mass. In the preface of the second Eucharistic Prayer, the priest utters these words on behalf of the people: ‘Fulfilling your will and gaining for you a holy people, he stretched out his hands as he endured his Passion, so as to break the bonds of death and manifest the resurrection.’ As I stood there on the altar one day with my arms held out before the chalice and paten, I felt the arms of Christ to be stretched out to embrace the world. I felt in that moment the strength that Miguel Pro showed in his moment of vulnerability before violence. I cannot think of a better gesture than his to express our own conviction as a Church before the deep challenges we face. We are vulnerable, but like Miguel Pro, our arms are stretched out to embrace the world just as Jesus’s arms were on the cross. We are ready and waiting to welcome the springtime of the Church.

Philip Harrison SJ is a Jesuit of the British Province currently studying at the Pontifical Biblical Institute in Rome.

The Jesuit way toward holiness