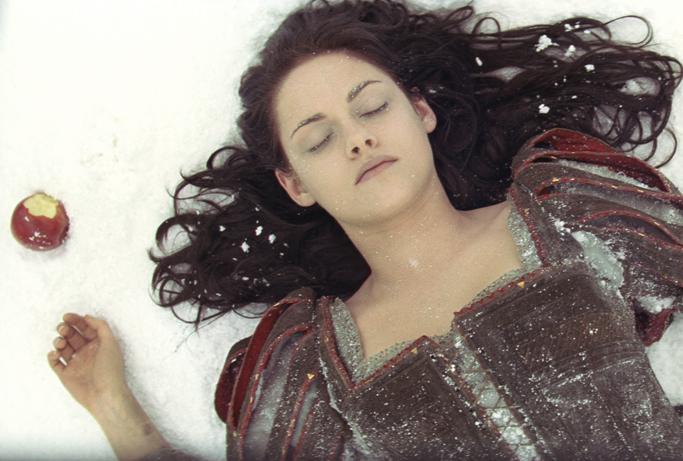 
It is commonplace to say of fairy tales that they link us in some way to a collective and collected past. This was the intention of the Grimm brothers when they went about their Romantic task of finding the stories that fitted their narrative of a pure German folk-literature, and we see a similar, though more nuanced analysis of fairy tales in the 20th century by writers such as T.S. Eliot and Karen Armstrong. Fairy tales, the theory goes, are archetypal stories that link us to fundamental human concerns; they are always relevant because they are timeless (‘once upon a time…’) and placeless (‘in a faraway kingdom…’), and their characters are universal types (‘there lived a beautiful princess…’). Snow White and the Huntsman is yet another re-telling of the story of the beautiful, pure-hearted princess pursued by her envious step-mother. In a strange coincidence it comes out at the same time as Mirror Mirror – but perhaps not so strange, for the past decade has seen our megaplexes swarming with fairies, gods, goblins and vampires.

Faced with the choice between Snow White and the Huntsman and Mirror Mirror, the discerning child will likely choose the former. It is visually much more mature and its self-proclaimed ‘twist’ – the huntsman ordered to dispatch Snow White in the forest decides to accompany and protect her – almost sets up an interesting love-triangle (the prince in this version fails to awake Snow White; the older Huntsman’s kiss is far more vivifying); but eventually the film opts to play it safe with the standard blockbuster narrative and characterisation.

Those who remember the Disney version will, I think, be largely placated by the newcomer’s attitude: Snow White and the Huntsman curtseys to its animated ancestor with a few recreated classic scenes, and the transformation of the loveable dwarves into seven angry blokes who have been seemingly turfed out of the nearest pub for having funny hairstyles works well in context. There’s even a witty line, as the dwarves wade through a sewer to invade the evil queen’s castle, one of them comments, ‘Hi ho lads, it’s work time for us’ (though this is followed up by the unfortunate, Ricky Gervais-inspired ‘How low can the dwarf race go?’). The dark forest and the paradisiacal land of the white stag are given makeovers by special effects that in Disney’s day would have been the stuff of fairydust. But the film is neither as funny as Shrek nor any more dazzling than its contemporaries, and the overall feel is of a studio playing it safe.

It’s a shame that this is so – after all, the two leads are phenomenally bankable for the intended audience. Kristen Stewart still has Twilightall over her, and when she leaps from a cliff top during her escape I half expected her to come out of the water with various problematic boyfriends in tow. And Chris Hemsworth barely breaks stride from swinging his hammer as Thor in The Avengers. The film plays it even safer with a patina of Christianity: Snow White says the Lord’s Prayer to herself in her prison and the dwarves describe her in Christ-like terms – she heals their wounds, they are her disciples, the white stag/Holy Spirit gives her his blessing. But just as Keanu Reeves in The Matrix (Snow White, like his Neo, is apparently ‘The One’), for all his posturing, was not Jesus, Snow White jettisons any Christian behaviour in her destruction of her stepmother. We are tantalised that she may be more than just another Joan of Arc heroine when she pacifies rather than slays a troll, but ultimately the message is that good triumphs over evil through physical courage and violence alone. There is an interesting point to be made that the fairy tales, for all the Grimm brothers’ sanitising, were very rarely Christian in their morality (the final paragraph of their ‘Little Snow-White’ is horrific), but I doubt we can attribute this awareness to the producers of Snow White and the Huntsman. Theirs is simply a Christianity stripped of anything challenging that does enough to point out the good guys, and then ushers in the usual strongman superhero wish-fulfilment.

That is the story of Snow White and the Huntsman, a fairy tale stripped of meaning. It compares poorly with a film like Pan’s Labyrinth, an outstanding fairy tale for the 21st century, that mingles contemporary reality and fantasy in a way that, once upon a time, the folk stories would have done for their first audiences. If fairy tales are to achieve their mythical effects upon us, they must break free of those traditions which act like that soporific apple handed to Snow White. The story still has content that could resonate with us: her step-mother’s fear of ageing, Snow White’s rites of passage, and we are teased that this film might offer us more than another standardised story. In the end, it is safely commercial.


Snow White and the Huntsman - Trailer