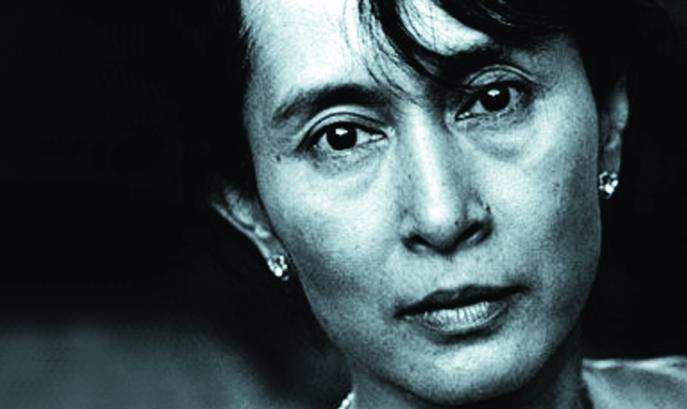 
Aung San Suu Kyi (Daw Suu) is an internationally renowned figure in the world of politics and human rights, spending twenty years in and out of house arrest (mostly in) for opposing the rule of the military junta which currently controls Burma. She has been steadfast in promoting political change through peaceful acts and in opposing violence. She counts among her many distinguished awards the Nobel Peace Prize. I was surprised, therefore, to discover that the documentary Aung San Suu Kyi – Lady of No Fear by the Danish director, Anne Gyrithe Bonne has very little in the way of a political message. It tells the story of a woman and her family. For those, like myself, who are relatively unfamiliar with Burmese recent history, there is enough information to create a basic understanding of the social and political circumstances which influenced Daw Suu’s personal and political life, but it is Aung San Suu Kyi herself and her family who form the focus.

Very little of what we learn about Aung San Suu Kyi is told in her own words. Understandably, Anne Gyrithe Bonne had no contact with Daw Suu during the making of the film, but towards the beginning of the film, she shows rather significantly a brief clip from an earlier interview where Aung San Suu Kyi is asked about the difficulty of leaving her family behind, and her response is: ‘I never answer personal questions.’ The interviews and recollections that follow give us a picture of Daw Suu through the eyes of others, mostly Westerners and mostly people who have known her from her youth, before there was any hint of a political career.

What struck me most about the film and about the lives of Aung San Suu Kyi and her husband, Dr Michael Aris, was the way it made me reflect on the nature of vocation. In the language of Daw Suu’s Buddhism, she is following the path that will lead her to truth – not power or fame or achievement but truth. Is not vocation a search for truth and meaning in our own lives, the specific purpose which God has entrusted to each and every person?

Watching this documentary, it would be difficult for any person not to see the hand of God in the life of Aung San Suu Kyi and the decision she makes, constantly to be with her people and to fight for democracy through peaceful means. It can be seen in the specific set of circumstances which helped to create the person she is today: her background, her father’s status, her education, but also and perhaps above all, in her mother’s illness which caused her to be in Burma at a very specific and crucial point in history. But many people struggle with the idea that a woman could leave her husband and two young sons to fight a political war half a world away. Surely Daw Suu is called to lead her people, but would God really call a mother away from her children, a wife from her husband? That is not a question easily answered.

Aung San Suu Kyi is an inspirational example of a person who uses her privileged status and upbringing for the benefit of others. Her father was a hero of the Second World War and of Burmese independence, and her mother was a prominent politician. Not only did she receive an excellent education, but she acquired political and diplomatic connections through her family. She has used her education and her connections to help her people fight for democracy, and her status as the daughter of the hero and martyr Aung San has given her an unusual sort of power. While many of her colleagues have been killed, she has been given different treatment, being held under house arrest, probably because of who her father was. She uses this advantage not for her own good, to escape to life in exile, but to continue working for the good of the Burmese people.

Daw Suu’s late husband, Dr Michael Aris, is also a focus of the film, and an inspiration in the way he lived out his vocation as her husband by supporting her and her cause even though they had little physical contact and often little communication. Through footage of Dr Aris and interviews of friends, the film gives us a sense of an extraordinary man, and though the film is nominally about Aung San Suu Kyi, it is also largely about Dr Aris, and about their relationship and the challenges they met together.