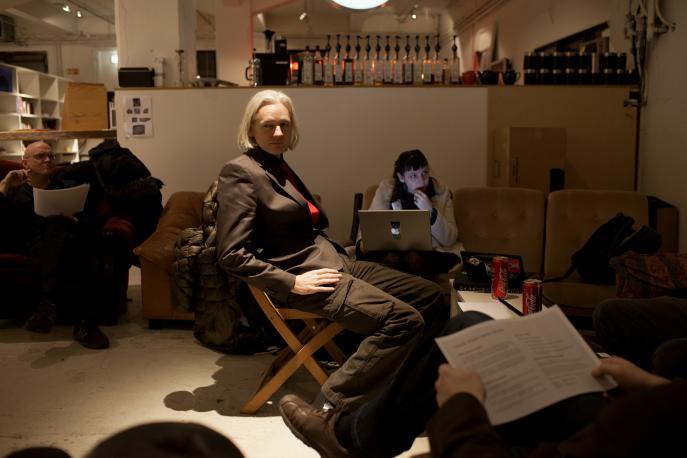 
The true story of WikiLeaks is more sobering and thought-provoking than any fiction. This documentary by Alex Gibney is a welcome distillation of a saga that dominated the news in 2010 and has done so again recently through the case of Edward Snowden. While an organisation such as WikiLeaks may derive its motivation from the noble ideals of transparency and accountability, many have questioned whether the achievement of such ideals comes at too high a price. In an age of increased transparency and near-complete connectedness, the ethical implications of online whistleblowing deserve careful investigation, to which this documentary makes a welcome and accessible contribution.

The film focuses primarily on the personal stories of Julian Assange, the founder of WikiLeaks, and Private Bradley Manning, the whistleblower and hacker. However, it weaves into their narratives the intelligence, media and political perspectives that surround them, whilst ultimately leaving the viewer make up his or her own mind about the ethics of WikiLeaks.

Julian Assange is an Australian computer hacker and self-styled cyber-Robin Hood, taking information from the powerful and giving it to the masses via the website he created for this purpose – WikiLeaks. He and his supporters believe that granting the general public access to classified information will spark domestic and global debates on the role of the military, banks and other institutions, which will lead to better foreign policy and ethical behaviour. The website enables people to publish classified information with the assurance that their anonymity will be protected. The documentary gives enough of Assange’s background as an activist and young hacker for the viewer to be simultaneously compelled and appalled by his brilliant but flawed character. He was instrumental in the leaking of Icelandic bank irregularities, and we hear from many staff, interns and followers who supported WikiLeaks in its crusade – all of whom Assange has fallen out with. The drama crescendos with a compelling account of the biggest leak of all time – that of 700,000 classified documents in 2010 by Private Bradley Manning.

In 2009, the WikiLeaks website had listed the information that it most desired: this was an open invitation to hackers and whistleblowers, and it gave them an unprecedented platform for their material. American military secrets were top of the Wiki wish-list. In Iraq, an unhappy, confused and disillusioned US military intelligence officer and IT specialist, Private Bradley Edward Manning, had unlimited access to digital information: aerial video footage of a 2007 US helicopter attack that killed civilians in Baghdad, footage of the 2009 Granai airstrike in Afghanistan and over 250,000 US diplomatic cables. The shocking, playful callousness heard in the voice recordings of the helicopter crews as they gunned down what turned out to be innocent civilians, was one of the many factors that led Bradley Manning to contemplate releasing the data he had collected to WikiLeaks.

Bradley Manning’s conflicting loyalties and personal problems resulted him in corresponding with another US hacker, Adrian Lamo, to confess what he was contemplating. It seems that Bradley Manning did indeed transfer his stash of data to WikiLeaks; it was the largest set of restricted documents ever leaked to the public, and much of it was published by WikiLeaks and its media partners between April and November 2010. Adrian Lamo eventually handed Manning over to the CIA and Manning was arrested for ‘aiding the enemy’ on 26 May 2010. He is currently standing trial in a military court and is potentially looking at a life sentence.

As well as Assange, his associates and Manning, the documentary gives voice to various spokespeople from the United States government, one of whom gives the documentary its title when he candidly says, ‘We steal secrets. We steal other nations’ secrets’. They believe, with reason, that certain of the documents unleashed by WikiLeaks are responsible for an almost unparalleled shift in global power and in stability in the Muslim world. Secretary of State Hillary Clinton claimed as much when she said that the work of WikiLeaks was, ‘not just an attack on America’s foreign policy interests. It is an attack on the international community: the alliances and partnerships . . . that safeguard global security and advance economic prosperity.’ One of the diplomatic documents leaked indeed showed the greed and corruption of the Tunisian president and fuelled an uprising. The implication is that spying is legitimate but leaking is not.

We Steal Secrets reminded me of the great power of documentary film-making and the need for more of it in a culture dominated by ‘breaking’ news and the selective, out-of-context stories that ‘trend’ thanks to YouTube and Facebook. The film left me with thoughts of the Sorcerer’s Apprentice and Pandora’s Box – naïve folk unleashing uncontrollable forces that change reality. It gives the viewer the cases for both the defence and prosecution of WikiLeaks, and it refuses to answer conclusively many of the questions it raises: Was Bradley Manning motivated by the desire to punish his country for acting unethically? Did he think he was going to make a positive difference? Why is it convenient and so predictable for the apprentice to take the blame when the powers above him and the whole system are at fault? And the biggest and most important question of all: has WikiLeaks been a good thing or a bad thing?

Thanks to this documentary and the skill of its director, we have much of the evidence by which to consider this question, and it is presented in a compelling and entertaining format. I will leave it to you to be WikiLeaks’ judge and jury!

The Secret Life of Bees