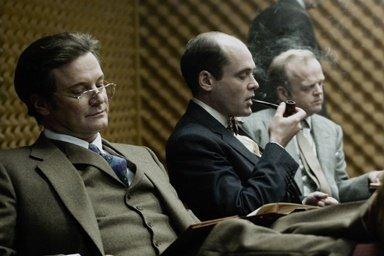 Question: how do you take a book which is part-social commentary, part-study of human nature and all complex, slow-moving spy novel driven by research, and turn it into a two-hour film?

Tinker Tailor Soldier Spy is an attempt to adapt one of John Le Carré’s most popular novels for the big screen. It has all the advantages of a stellar cast at its disposal, with Toby Jones, Colin Firth, Ciarán Hinds and David Dencik as the four suspects, one of whom is a mole feeding British intelligence to the Russians. However, they are given very little to do and Gary Oldman steals the screen as George Smiley. He is characteristically unrecognisable as himself, inhabiting his character so entirely. He is perfect as Smiley – completely unassuming, the sort of man you wouldn’t look twice at in the street, an experienced spy who approaches every task with the same cold, calm calculation. Benedict Cumberbatch is also excellent as the less-experienced Peter Guillam, portraying with ease his anxiety and lack of confidence.

Tomas Alfredson’s film works well as a piece of cinema but less so as an adaptation of the novel. The first problem is the script. It should be evident even to those who have not read the book that there is more than one hand at work here. Hint: the well-chosen phrases and natural-sounding dialogue are Le Carré’s; the awkward, wooden ones belong to someone else. At times, even Le Carré’s original dialogue is made to sound awkward by the editing and redistribution of lines so that they are bereft of their original contexts.

It is natural that elements of the plot should be cut to ensure the film is of an appropriate length, but much greater care should have been taken in the redrafting of the story. The beginning of the film is choppy and it is some time before it hits a comfortable stride. Some scenes, such as Smiley’s visit to Oxford, are given such short shrift as to be almost useless and one wonders why they were not cut altogether. This creates a clumsiness, which belies the smooth coherence of the novel.

What I lament most is that the depth and tension which I found so compelling in the book have not found their way into the film. The novel is a complex puzzle with Smiley slowly, calmly sifting through layer upon layer of information to find the relevant pieces and put them together. The novel is held together by a brilliantly-constructed tension that comes from distrust and paranoia because this is a story of spies spying on spies: we’re watching them, but they’re watching us, and who will make the first mistake? This tension is highly underdeveloped in the film, not to mention the fact that the spies of the film are hardly recognisable. The reader is steeped in Le Carré’s world of espionage where men are trained to be inconspicuous and to notice the smallest detail, where a watcher can change his disguise, but if he doesn’t change his shoes, he’ll be found out; they are professionals, shadow men. The film’s spies by comparison are a bunch of blundering elephants – opening curtains in a flat they shouldn’t be in, driving in their own car straight up to a house they shouldn’t even know about.

For its atmosphere, the film relies predominantly on conjuring up feelings of the past. It is strange to think that when Le Carré wrote his novel it was set in the present, but in the inexorable march of time that present has become a barely-remembered, though not-so-distant past. In our digital age of fast-paced information overload, there is something fascinating about a time when documents existed only in physical form and spies recorded telephone conversations on tape. The atmosphere is well created and maintained, drawing the viewer into this world of Cold War intrigue, though it does tend to border on nostalgia.

The social dimension of this atmosphere, though it is integral to the plot and adds depth to the novel, is completely ignored in the film. These men are a microcosm which represents the struggle of the British people to reform their identity and find a new place in the world following the Second World War. Smiley and the mole both belong to a generation brought up to defend an empire but who were then left with no empire to defend, while Guillam represents the post-war generation who romanticise the past. This social angst also provides the key to the mole’s defection. Witnessing Britain’s decline from global power, he saw himself being forced to choose between America and Russia. It is unfortunate that the filmmakers decided to cut this aspect of the story because, in addition to the novel’s well-modelled characters and finely-crafted plot, the tension and the study of this social phenomenon give it a level of brilliance which the film does not share.

Tinker Tailor Soldier Spy is entertaining, but it fails to engage with the fundamental aspects of spy culture and post-war British identity which could have made it a much more interesting and memorable film.