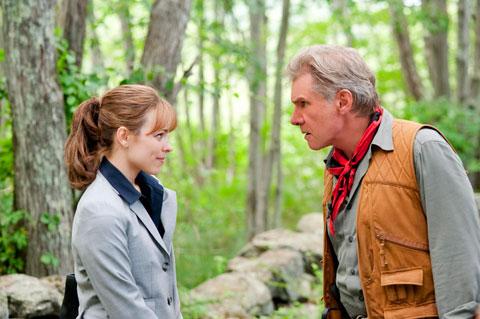 
It was always Becky’s dream, right from when she was a little girl, to be a big shot TV news producer. She saw herself right at the centre of the sort of news programme that might break a Watergateor at the very least drive the daily news agenda. Instead, she ends up working very hard to keep a morning news magazine going in provincial New Jersey. Despite all her hard work, she’s sacked (not her fault, the network’s new owners want her to be replaced by an MBA called ‘Biff’ or ‘Griff’ or something like that). Her persistent self confidence and eccentric je ne sais exactement quoi lands her a job as the senior producer of Day Break in New York. Day Break is a tired, flailing melange of rapping weathermen, celebrity news stories, cooking and psychic pets. Its male anchor is egotistical, predatory, orange and not really interested in the news; his counterpart, Diane Keaton, is an old trooper, but knows she’s at the end of her career in a failing, marginalised team held in contempt by everyone around her. Into the mix comes Harrison Ford playing Mike Pomeroy, a Pulitzer-Prize winning Grand Old Man, whose persistent offensiveness turns out to be because he knows he made the wrong choices in his life: despite his material and professional success, he is unhappy because his children hate him.

Becky’s destiny is of course obvious (and it will be so obvious to you now that you might be asking yourself ‘why don’t I jack in this lark as a plumber/curate/central heating engineer and become a Hollywood scriptwriter?’). She will save the day, save the team, reconstruct her career, redeem the fallen, become the youngest senior producer anyone’s ever had, and find a handsome, clever and rich unmarried man. It’s a bit like watching a young Judy Garland in a remake of The Devil Wears Prada.

The Judy Garland joke isn’t mine — it came from the film, which, despite a pretty predictable plot full of stereotypes of American news media (though they might seem fresher to UK eyes) made me laugh a lot, and had me laughing again several hours later.

That humour will appeal to a surprisingly diverse audience. Harrison Ford’s ragingly grumpy Mike Pomeroy slaps witty one-liners one after the other, and there is an agreeable innuendo-laden sparing between him and Diane Keaton. Occasionally, unexpected jokes jump out of the script. At one point, furious that a man with his talent should have to introduce an item about knitting, he lists his various achievements: he remained calm under fire in Kosovo, he was shot through the arm in Bosnia, he saved Colin Powell’s life, he won the Pulitzer, he even — he even — had lunch with Dick Cheney. It made me laugh (though I think I was the only person in the cinema who found that line funny).

Writer Aline Brosh McKenna also scripted The Devil Wears Prada and the plots have obvious similarities. Morning Glory is not such a tightly made film: there are strange zig-zags in the flow of ideas here and there, plot themes are left unresolved or not completely developed, and perhaps editing could be sharper. But there are some great gags, and as I type this four days after seeing the film, I’m still smiling at certain images and jokes.

Of course it’s all wish fulfilment: the plucky young woman succeeds in the end, she gets her man, and she maybe even sorts out her relationship with her own angry absent father through the cipher of her attraction to Harrison Ford (as might some of the audience). But again, this is all strangely satisfying (if you’re in the right mood) because this is what happens in people’s lives, and this faith in our own possibilities for reform, and our capacity to laugh at our own absurdity, is what keeps life going.

Because, despite all of it, this silly stuff contains truths about being human. If you spend all your days focusing on your day-job, your children will grow up to see you as an irrelevance or worse — that’s simply one consequence of having the wrong gods, of idolising a particular form of success. Turning a team round from failure to success is really hard work, and most of the work is in changing people’s attitudes about themselves. And being a young professional is often really painful — a period in which personal visions and dreams are forced into confrontation with realities and possibilities, and in which life-changing choices are made.

And if you are in the right mood, there are those moments of redemption, relationship and commitment that might even move you. Such is, to paraphrase Noel Coward, the extraordinary potency of cheap cinema.

Faith, Reason and the Modernists