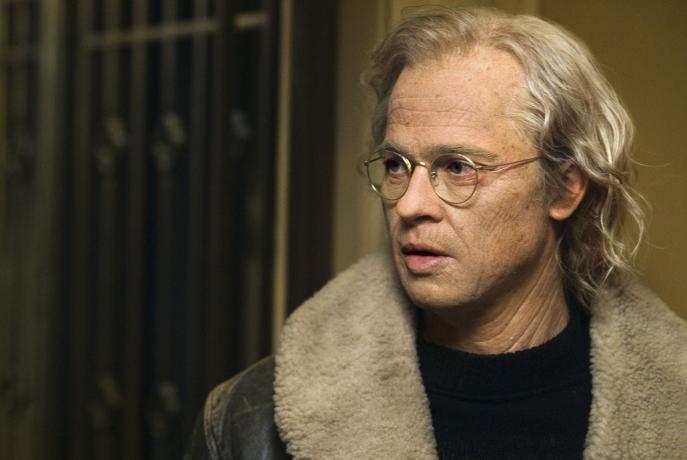 
Old Benny Button was born that way, old. He was a stiff and wrinkly monstrosity and his father snatched him from the doctor, ran into the streets and dumped him on the steps of, of all places, an old folks home. While this is funny, The Curious Case of Benjamin Button refuses to play any part of its absurd premise for laughs. If it did, it would have more fidelity to the source material. F. Scott Fitzgerald's short story has Benjamin Button born fully grown with a long beard and telling his father off as he takes him to the tailors hours after birth. But no, this film chooses instead to depict the life of a man who ages backwards as a strange and beautiful fantasy, and thus ignores all the interesting realities that might come with that. Surely a crippled baby with bad hearing and bad eyesight would be a slow learner? His mind, like that of an OAP, would be limited in what it takes in, at a time in life when it should be a veritable sponge. And what if, when his body was 35, he became a marathon runner, getting fitter and stronger with every race?

Nonetheless, this is a beautifully made film. Its tone is almost magical, its message almost transcendent. Alas, almost doesn't cut it. Big budget Hollywood drama is a high stakes game, it's all or nothing, and if the film doesn't steal your heart then you're left in your thoughts, and films like this are not comforting to think about. The sumptuous score plays its part in the alchemy, as do the settings and the camera work and the performances – if there's one solid element of this film, it's the acting. But still this basic premise is disturbing. Brad Pitt and Cate Blanchett can looks as beautiful as they want, it won't change the fact that this wrinkly boy is visiting prostitutes, or that this 'old man' appears to be falling in love with a nine year old girl, Daisy.

It also has a bad case of the Gumps as this stoic outsider transcends his circumstances to lead an extraordinary life which weaves through historical events: he was born on the day World War I ended, has an affair with the spouse of an English spy in Stalin's Russia, serves in World War II – even the narration is set on the day Hurricane Katrina strikes New Orleans. But while the fairy tale whimsy of Forrest Gump worked, here the intelligent characters can't hide behind simple-mindedness and have no reason to be so unthinking about the situation.

This all comes to a head when Benjamin Button and Daisy's ages finally match. They have a long affair and eventually have a child but Benjamin abandons them, fearing that his anti-aging will see Daisy having to raise two kids. This makes no sense. Firstly, Benjamin is physically forty years old or so; he'll be an adult for the next two decades which is enough time to raise his child. He'll have the wisdom of an older man, which is surely a good thing. And if the casual, accepting reactions of everyone else in the film is anything to go by, his own child isn't going to be too perturbed by her daddy's backward aging. Secondly, this momentous decision highlights how little we know about the character of Benny Button. So far his quiet demeanour has been charming and gentle, his pretty face being a foil for our good wishes. However, skipping out on his wife and baby is big. As an audience, how can we be expected to go on approving?

As if to prove how foolish the decision to leave his family was, we see Benjamin visit Daisy and his kid when he's looking around 21. His child is a teenager and unaware Benjamin is her father. There, with his daughter almost grown, whatever reason he had for leaving is proven wrong. And to compound the mistake, Daisy ends up nursing Benjamin anyway, as he develops Alzheimer’s in a boy's body.

The overarching message of The Curious Case of Benjamin Button wants to be that life is beautiful in spite of its tragedies, perhaps even because of them, and that life is full of wondrous possibilities. But these lessons go unlearned by its protagonist. Benjamin's youth is surrounded by death in the old folk’s home and as he sees his friends get killed in WWII, but it only leads him to leave his daughter when he should have realised how important loved ones are. Perhaps Benjamin left because as a perennial outsider he doesn't value relationships as others do? Perhaps his freakish condition leaves him scared of intimacy? Who knows? Not us. There may be other sides to this intriguing premise that get lost when pushed through the Hollywood tearjerker template. As good as this fairy tale vision is, this story remains incomplete.