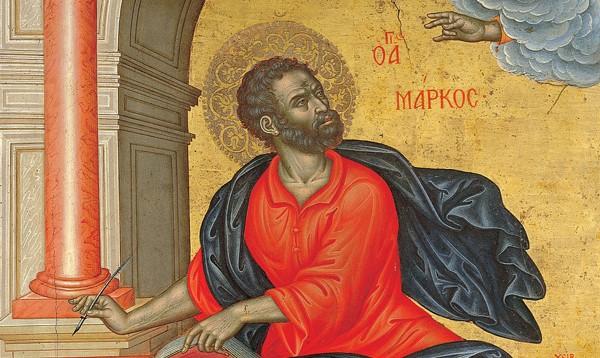 The first disciples of Jesus are ever-present and important characters in the Gospel of Mark, and the arc of their journey is one that today’s disciples can recognise and learn from, says Niall Leahy SJ. Can you locate yourself on the path that Mark sets out: from knowing Jesus as the Son of God, which he concentrates on in the first part of the gospel, to the faithful discipleship to which we are called in the second?

In the first eight chapters of his gospel, Mark is primarily concerned with presenting Jesus’s identity as the Son of God in such a way that it could be readily apprehended by a first century Jewish mind. Jesus’s divinity is writ large as we read about the Father’s endorsement of his son (1:11) and Jesus’s subsequent public ministry in the rural region of Galilee, where he repeatedly manifests his power and authority, firstly over evil spirits. They have kept numerous people’s souls and bodies bound for years, yet they have no choice but to obey Christ’s command to depart. In fact, the first acknowledgement of Jesus as the Holy One of God comes from a demon who finds his presence unbearable (1:23-28). Jesus then claims and exercises the authority to forgive sins (2:1-12) and, following this, the sabbath comes under his rapidly extending dominion (2:23-28). Since the sabbath has its origins in the Genesis creation story, it comes as no surprise that Jesus then displays the ability to calm the stormy sea (4:35-41) – even the natural world is obedient to the one who was present in the beginning. Finally, when Jesus brings Jairus’s daughter back to life (5:21-43), Mark shows us that Jesus’s authority extends even beyond this world and into the realm of the afterlife.

While Jesus witnesses to his divine sonship, the defining characteristic of the other characters in the narrative is their faith in him, or lack thereof. Simon, Andrew, James and John display early and promising signs of faith. Once they receive an invitation to follow Jesus, they immediately leave their work as fishermen, even, in the case of John and James, without having waited for the approval of their father (1:16-20). And on the whole, the rural Galileans are portrayed as being open to Jesus and his authority. A population that knew the precariousness of life would have been slow to be taken in by a fraud, but they recognise Jesus’s integrity by his willingness to help those most in need: the sick, the lame, the leprous outcasts, the possessed, and even the dead. Mark portrays the Galileans as a talkative people, and it is through word of mouth that Jesus’s fame soars.

The faith and clear-sightedness of the country people act as a foil that highlights the cynicism and wilful blindness of those who question and reject Jesus. Rather than being open to him, the scribes and Pharisees devote themselves to finding anything that could undermine Jesus. They question his decision to eat with tax collectors (2:13-17) and to feed the hungry disciples instead of keeping the sabbath regulations (2:23-28). They even go so far as to accuse him of being an agent of Beelzebul (3:22). As Jesus’s authority becomes more evident and expansive, the mindset of the scribes and Pharisees becomes increasingly rigid and narrow.

Against this backdrop, Mark presents the parable of the sower (4:1-20) to help the reader make sense of the variety of responses to Jesus. Jesus attributes the mixed results of his mission up to that point to the quality of the inner ‘soil’ of each person’s heart and character. Superficiality, fickleness and materialism in the hearts of the people all conspire to negate the fruitfulness of God’s action in their lives. The quality and universal distribution of the seed – Jesus’s words and actions – is not in question.

We can gauge the strength of Mark’s own faith from the fact that he seems to assume that anyone who encountered Jesus ought to have grasped his divine identity. Yet the pictures he paints of some characters in the gospel are such that we can easily forgive them for not doing so. Pontius Pilate serves as a case in point. His Roman conception of the gods would have hindered his ability to perceive Jesus’s divinity: Jesus did not act or speak like a god of the pantheon. However, Jesus’s words and actions in the first eight chapters suggest that he was revealing his identity in a way that would be readily understood by the Jewish people.[i] His words and acts of calling, leading, healing, commanding, teaching and forgiving are all proper to the God of Israel as revealed in the Tanakh. The reaction of the scribes and Pharisees to Jesus’s claim that he can forgive sins attests to the fact that his claim to be divine was not lost in translation. At the midway point in the gospel, the equivalence of Jesus’s words and actions with those of the God of Israel is blatant and deliberate.

Peter’s profession of faith (8:27-30) represents the apex of the story. From this point, as Jesus makes his way first towards Jerusalem and ultimately towards Golgotha, a sense of foreboding replaces the previous strident tone. The Christology of the suffering servant[ii] comes to the fore and Jesus reiterates again and again that he must die before rising again. The reader can sense the funereal overtones of his entry into Jerusalem. The superficiality of the kingly welcome becomes all too apparent as his disciples desert him one after the other. Just as they did with John the Baptist, the political authorities choose political expediency over justice. They hand him over, alone and abandoned, to be executed. The lack of courage displayed by the disciples must have been shocking to the first century Christians who themselves faced persecution.

If the desired human response to Jesus’s public ministry in the first place is faith in the sense of assenting to his divinity, then in the second it is discipleship: fidelity in following Jesus. This is first made clear by Jesus when he exhorts the disciples to ‘take up their own cross and follow me’ (8:34). The Father did not send Jesus into the world on a solo mission: there is also a co-operative dimension to his mission whereby he will gather a community of disciples who will work with him to bring about God’s reign on earth. We are given an early hint as to the priority of this co-operation in the first act of Jesus’s public ministry, which is not the working of a miracle but the calling of the first disciples. From the beginning, Jesus worked on the assumption that discipleship does not just entail knowing him as the Christ but also following him as the Christ. Peter’s profession of faith, which even though he orders him not to repeat it is the first profession that Jesus accepts, therefore serves as a teaching moment where we learn that faith ought to move us to discipleship and the taking up of one’s own cross.

Immediately after Peter’s profession of faith Jesus spells out very clearly that he is destined to suffer, die and rise again, and that his followers will share in both his suffering and his glory (8:31-9:1). The disciples find this difficult to accept and the Roman soldier at the foot of the cross is the first to understand the kenotic nature of Jesus’s mission (15:39). Mark does not communicate the ideal of discipleship through positive case studies but rather by the negative examples of the disciples continually falling short. They secretly aspire to greatness and honours rather than service and humility. Their inability to follow Jesus through thick and thin culminates in his plaintive calls on the cross to the Father that reveal his sense of utter abandonment.

The question mark over the adequacy of Jesus’s followers even extends into the resurrection narrative: the two women, who at that moment are the sole members of the nascent Church on earth, are overwhelmed and paralysed by a combination of fear and awe (16:8). Will they pluck up the courage to speak or not? The abrupt and arresting original ending of the gospel[iii] leaves the reader facing the same existential questions as the first believers. Mark leaves us on the cusp of a new era, with everything in place for the realisation of God’s kingdom on earth pending the cooperation of his disciples, including the reader.

Niall S. Leahy SJ is a deacon of the Irish Province of the Society of Jesus, currently studying for an MA in Theology, Ecology and Ethics at the London Jesuit Centre.

[iii] It is widely accepted that the longer ending of Mark’s Gospel (16:9-20) is a later addition to the text.

Our Political Responsibility for the Common Good