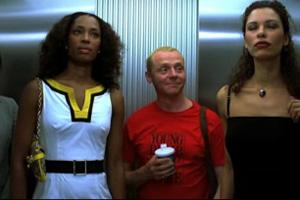 
Free with the tickets to How to Lose Friends and Alienate People came a copy of The Sound of No Hands Clapping – the follow-up book to Toby Young’s tale of social ineptitude. As a publicity stunt it’s a tame one coming from the man who once phoned in the story of the fracas following his inability to pay the bill in a posh New York bar. We are left to assume that readers have been responding in the same way that the characters in How to Lose Friends… respond to Young: a mix of revulsion and irritation.

They are reactions that Young (played by Simon Pegg) stimulates by being both unwitting and unwitty: for every innocent faux pas (British “loser” humour) there is an incident such as bringing a transsexual stripper to work on Bring Your Daughter to Work Day. The audience is invited to be amused by Young’s repeated social disasters contextualised by the sterile world of a high fashion magazine. Much of the humour roots itself in the Britain vs America dialectic: London is a dirty footprint stepping on a discarded newspaper; New York is neon lit skyscrapers and actresses strung out along the side of swimming pools. Pegg is a Brit whose dancing and posture revolt his female colleagues (New York women, he is told, only date men who are successful and tall), as he displays his usual repertoire of funny faces and mantis-like gestures.

The humour lives when those surrounding Pegg become even more unlikeable than his character. Gillian Anderson and Danny Huston put in decent performances as an icy publicist and womanising editor respectively – Huston in particular, as a man “with hidden shallows” is an entertaining presence. But Pegg’s brand of humour is ultimately absorbed into a romance/finding yourself story arc, taking most of the bite out of the self-disgust/self-aggrandisement oscillation at which he excels.

It’s funniest in its depiction of the film industry. The latest star is Sophie Maes (Megan Fox) and her vehicle is a film called Teresa: The Making of a Saint, in which Mother Teresa has become a love-torn beauty who spins a globe to choose Calcutta as her future. The closing credits feature a spoof trailer in which Teresa tears herself away from an iron gate, the other side of which wait the lips of her beloved. “Sometimes…to find faith, we must find someone who believes in us” intones the voiceover. It is depressingly believable stuff.

Megan Fox’s character encapsulates the gorgeous vacuity of celebrity fascination. She is unfeasibly attractive – daring – empty. So much has been said about the phenomenon of celebrity fascination that really the only interesting thing to note is that despite our knowledge of the human cost of fame (Britney Spears) and the emptiness of its gifts (Big Brother), it continues to hold us in thrall. F Scott Fitzgerald did the most in capturing the intoxication it stirs within us. At the climax of ‘The Offshore Pirate’, the glory of romance casts “an ecstatic surety that she was youth and beauty now as much as she would ever know…for another instant life was radiant and time a phantom and their strength eternal” – and then it vanishes. That surely is one of the projects of celebrity – to defeat time by creating a superstructure of instant satisfaction, flattery and importance – so that “youth and beauty” are fetishized above all else. It is what stirs in its wake – what Fitzgerald is silent about – that disturbs this fiction.

You couldn’t grant How to Lose Friends and Alienate People the badge of incisive satire: it’s too evidently Hollywood for that, and besides, Zoolander is far funnier. But take your friends with you and you would get thanked. And surely it’s worth seeing anything that has so annoyed the New York Times reviewers – apparently they don’t appreciate being told by an outsider that New York has faults.