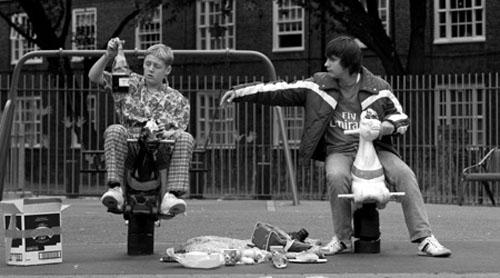 
Patronage in the arts goes back a long way, ever since somebody rich decided they could do with somebody talented making them look good. Chaucer was paid to write a poem about how attractive ­­­John of Gaunt’s wife was. Shakespeare was so enamoured with King James’ support of his acting troupe he slowed up Macbeth to let the audience know how great the king’s ancestors were. Sucking up to your sponsors has always made good financial sense, and it was certainly a good form of health insurance. Hopefully Shane Meadows’ latest film, Somers Town, named after the area adjacent to the new Eurostar terminal at St Pancras, and funded and produced by a coincidental company named Eurostar, has had the intended benefits for the director.

It makes watching the film an oddly bi-polar experience. On the one hand, the film is a well-made, balanced tale of friendship in exile. On the other hand, it’s just an overlong advertisement, its whole narrative subsumed into enhancing the Eurostar brand.

Example one: Marek’s dad, a Pole working on the St Pancras terminal, meets his son after work. He’s excited by the gift granted him by his employer, which was a trip on the Eurostar, which went ‘under the sea, all the way to France in just two hours…can you believe it?’. It’s legitimate character information: his dad’s a proud worker, their relationship is defined by his dad’s decision to move to England. It’s also dialogue that could have been lifted from a Eurostar commercial.

Example two: chasing the beautiful French waitress Maria to Paris, Marek and Tommo somehow have the idea of getting two tickets on board the Eurostar. They arrive in Paris. The film blossoms from black and white into colour. They eat in a French restaurant. They walk through Parisian parks. They see the Eiffel Tower. It’s the culmination of the boys’ fantasies. And again, it’s material that could have been lifted from a tourist production for Paris; Maria, who in London is another player in the multinational ordinariness that Meadows creates so well, becomes the clichéd bohemian Parisian of in-flight entertainment magazines. Eurostar has brought them together.

For what is therefore a publicity film, Meadows and his cast deserve credit for creating life where a lazier director would have used papier-mâché people. Tommo (Thomas Turgoose of This Is England) is a runaway from Nottingham, believable with his bravado and vulnerability, who befriends Marek. To both boys, London is a foreign place, demarcated by their social position. There’s a refreshing background of kindness as well as the expected violence in the city: Tommo in particular, whose appearance would have D__ M__ readers crossing the street, inspires charity in two of the adults whose paths he crosses.  Marek is given a ‘Terry Henry’ Arsenal top to cover up his Manchester United shirt; he’s told it will be his guardian angel, watching over him in north London.

Central to the film is the friendship between Tommo and Marek. They are competitors and partners for Maria’s affections, which she bestows in equal measures. Tommo mocks Marek’s accent; Marek laughs at Tommo’s enforced wardrobe of women’s clothes. Underneath the bluster there is a deep flow of affection, a recognition of loneliness and need. Their backgrounds are sketched in – you get the sense that there’s a longer film waiting to emerge, but the plot, rushing towards its Parisian terminus, is faster than a weekend trip for two from £99 per person and won’t stop for any more diversions. The economy of information that this creates has its benefits: it would be out of character for the two teenage boys to eloquently express their emotional journeys.

It’s a film that is worth seeing, but remember where your money is going. Meadows doesn’t deserve any criticism for taking an offer and making a decent film out of it, but one can’t help but feel disappointed that the characters whose lives involve us are little more than numbers running around at the base of an accounts sheet somewhere in Eurostar’s shiny central office.

A question of ‘genocide’

Stepping Stones to Other Religions: A Christian Theology of Inter-Religious Dialogue

Outside the City
A Little History of Poetry
Co-creators of a better world
Prayer and discernment in lockdown
Laudato si’ and Covid-19: Can praises still be sung in a strange land?