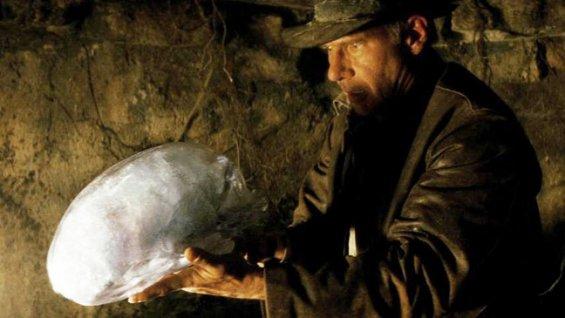 
The original Indiana Jones films were made in the 1980s and set in the 1930s but had little to do with the events of either period. The defining events of the '30s were notably absent: the Great Depression in America, Gandhi's fight for independence in India, the rise of fascism in Europe (ok, the bad guys may have been called “Nazis” but they weren’t depicted as genocidal megalomaniacs, just greedy, well-dressed goons). And as far as I can remember there were no yuppies with brick mobiles chasing Indy in their Lamborghini Countachs. Even subtextually the realities of the '80s were abandoned for the nostalgia of boyish adventure. And that's all because Indiana Jones wasn't inspired by real life events, he was born out of classic film serials, short films that preceded the main feature aimed at kids. It's this inherent timelessness that makes Indiana Jones the most likely of all the recent '80s revivals (Die Hard, Rocky, Rambo) to succeed.

The Kingdom of the Crystal Skull is set in 1957, nineteen years after the last outing. Harrison Ford chose to prepare for this role in the Method Acting tradition by actually aging nineteen years – a bold move for these Hollywood types. But fear not, while there may be be a melancholy moment as Indy laments the passing of his father (sorry, no Sean Connery this time!) Indy’s aged body doesn't stop him getting himself into all kinds of scrapes.

The action begins in New Mexico. Cate Blanchett's über-fringed Commie agent Colonel-Doctor Irina Spalko has kidnapped Indy to help her find an artefact hidden in a giant Government warehouse. What is this artefact? Well, it’s in New Mexico, in the 1950s, and the warehouse has a giant “51” painted on the doors. At this point, there’s momentary panic. Is ‘Indiana Jones’ going to turn its back on the pulp fiction/movie serial tradition of the 1930s and draw its inspiration from the terror-soaked 1950s B-Movie?  Thankfully no. In fact, just to prove the franchise still has its boisterous spirit there’s a chirpy scene where Indy is accidentally caught in a nuclear blast! I can't think of any other mainstream film that has played the horror of the Cold War with such guffawing nonchalance. Nonetheless, we're soon back in the jungle where once again time doesn’t matter.

As for the plot, that doesn’t matter either. All those years in “development hell” saw the script being passed on from writer to writer and is probably the cause of the film’s patchy nature. The plot is very confusing and ultimately irrelevant as its only purpose is to set up action sequences. But as those action sequences are such fun we barely miss a coherent story. That movie review cliché of “a rollercoaster ride of a movie” fits perfectly here. As they zoom around in cars and on bikes, go over waterfalls, and get pinned to the front of speeding trains, the whole thing seems like an extended pitch for a new theme park ride.

Joining Indy are some new faces. Mutt Williams, a greaser whose youthful follies bring out the best of Indy’s laconic quips. Mutt is played by Shia LaBeouf, and there’s even been speculation that he will someday, somehow, take over the franchise!  But despite being Hollywood's current golden boy he’s completely unremarkable here. Then there’s the British connection. Jim Broadbent fills in for the late Denholm Elliott as Indy’s academic benefactor. Ray Winstone pops up every so often to bellow ‘Jonesy!’ in his Laanden accent, betray Indy then scarper. And John Hurt, with his beautiful tone and diction is put to astounding use as a mumbling mad man.

The 1980s is commonly thought of as a barren time in US cinema. In contrast the 1970s was jammed with modern classics – Taxi Driver, The Godfather, Star Wars. The only true success of the '80s was the action film. Die Hard, Rambo, Terminator, Lethal Weapon; the genre was made on film like these. And Indiana Jones had a role too. This latest Indy adventure limits its use of CGI and goes back to the visceral thrills of good old-fashioned 1980s stunt work. But while The Kingdom of the Crystal Skull is fun while it lasts, it won’t be remembered as fondly as the first three films, and any kudos it does get will be in reflected glory of its predecessors.