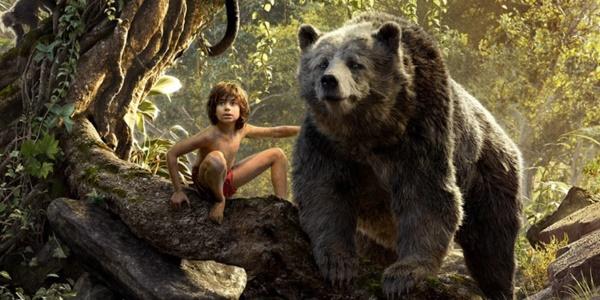 It is sometimes suggested in learned circles that the quality of a film can be judged by watching it with the sound off. If you can still follow the narrative from the body language, framing of shots, juxtapositional editing, etc., then what you have is an effective piece of visual storytelling. What this doesn’t say is an equal and opposite truth, that if flipping the audio back on adds little to nothing, then you’ve just probably spent two hours in silence with a dud.

The latest Walt Disney picture, a scintillatingly-CGI-ed rehash of the 1967 animated feature, plays like a summary of the sparknotes of a book that nobody has read. The conspicuous accomplishment of the film is its visuals, and its naturalistic renderings of animals are impressive throughout. The problem, however, is that even though the critters open their mouths and speak intelligible words, they never really get around to saying much of anything.

Yet talk they do. Baloo the bear (voiced by Bill Murray) persuades Mowgli (newcomer Neel Sethi) to wrangle him some hard-to-reach honeycombs. Kaa the snake (Scarlett Johansson) fills in the ‘man-cub’ on some backstory and introduces the poetical conceit of fire as mankind’s powerful yet destructive ‘red flower’. Bagheera the panther (Ben Kingsley) insists that Mowgli return to human civilisation, since he is being hunted by the tiger villain Shere Khan (Idris Elba). There are even a few a capella snippets from the original’s well-known jingles. But these animated animals do not say anything new or difficult, and by implication, not much that is particularly interesting.

50 years ago, Mowgli had to make a difficult decision. He felt at home in the forest but had to face down the incarnation of a deadly – perhaps because perpetual – wildness, and then respond to the first pangs of adolescence and their implicit invitation into civilisation. The Mowgli of today plays a trick or two, like an archetypal Huck Finn, and as far as we see, stays among the animals and in a child’s world forever. Whereas the first avatar involved sacrifice and introduced some themes about the journey into adulthood, the latter suggests a kind of indefinitely prolonged playtime in a jungle without any teeth.

This makes one wonder at the meanings submerged in the structures of some of today’s entertainment. Contemporary cable television series like The Wire, Breaking Bad and The Walking Dead ask us to consider the complexities of a broken down binary between good and evil. However, despite this film’s prima facie pretension to the increased ‘realism’ of a child actor among lifelike animals, even what grist for the mill of cultural refinement that could be found in the mid-twentieth century cartoon version of the story has been diced down, bleached and more or less preprocessed out of existence. It calls to mind Baudrillard’s critique of a culture sick with the postindustrial fever he calls ‘hyperreality’, where persons make copies of copies until the original – aka reality itself – becomes lost from experience.

Not forgetting how Tolkien answered his cultured despisers when accused of encouraging escapism – that the only persons concerned about people escaping are their jailors – it might nevertheless be ventured that imagination can be instructively distinguished from distraction. For Romantic thinkers and poets from Coleridge to C.S. Lewis, the former is a faculty of insight into a reality more profound than the things immediately accessible to the senses, whereas the latter, it might be supplemented, is mere departure from them. Imagination means an escape from false constraint, whereas distraction means escape into it.

The latest Jungle Book, in these terms, is deeply unimaginative. It distracts even as it dazzles with advanced digital technology, and as a consequence amounts – if one hesitates to say, to an instance of insidiously escapist entertainment – then at least to little more than a substance-stripped show of sparkling superficiality.