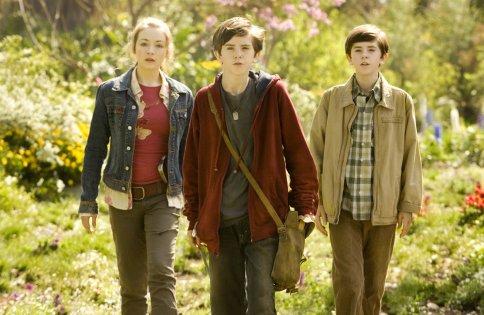 Not so long ago, rough weather and a family gathering caused me to visit an aquarium. This one specialized in seahorses. I knew what seahorses looked like, in my mind's eye, but I was not ready to see them in their hundreds, propelling themselves with whirring fins, latching onto blades of seagrass with their tails; I had forgotten how madeup they look, and how preposterously unreal they are. I didn't know that male seahorses give birth, or that they mate for life, or that they are gradually being wiped out. It was a corner of the world about which I knew nothing, and its rediscovery in this aquarium served only to etch in more detail the geography of my ignorance.

I've been thinking of seahorses since watching The Spiderwick Chronicles. The film is an adaptation of the series of books of the same name and slots without fuss into the post-Narnia spate of fantasy films. Three children discover an invisible world of faeries and goblins, and must protect their great-great-uncle's "Field Guide to the Fantastical World Around You"  from falling into the wrong, ogreish hands. As a film, there isn't much to distinguish it from its siblings such as Lemony Snicket... or The Golden Compass, but the story resounded with something within me, the same part that was so overjoyed to watch seahorses twirl and dive.

Perhaps a confession first, about my long and undignified relationship with fantasy. The Animals of Farthing Wood morphed into The Weirdstone of Brisingamen, which in turn left me a dice-rolling teenage Games Workshop devotee; along the way I've read books about dragons, elves, moles (Duncton Wood coinciding with my 16th birthday - an odd time for all concerned); I'm never more delighted than when a wild animal wanders up to me in a forest and asks me where I'm going. Behind the formulaic veneer of The Spiderwick Chronicles lies the same primal impulse to imagine an epic, ambiguous, mysterious world, visible if you squint hard enough.

Jared Grace is the angry, son-of-a-divorce discoverer of this film's hidden world. He is led there by rattlings in the floorboards - then a dumb waiter carries him up within the walls - a forbidden book - a key. As we've seen with power in Pan's Labyrinth, the world he discovers is an escape from the pain of reality, but not a place where humans can live without danger. The child must live in both worlds, seeing the invisible and hearing his mother's frustration. His great aunt has been reduced to being a sanatorium's patient who speaks to flowers.

The association of the fantasy world with nature is something that goes way back, further than Peter Jackson's industrialising orcs, or Shakespeare's enchanted forests. Watching Quebec spread out beneath a griffin's wings, or dandelion seed faeries swarm around the body of Arthur Spiderwick, one can't help but panic a little at the real terror we are inflicting on our only planet. Worrying too is the irony of sitting in a cinema and feeling these thoughts...The Spiderwick Chronicles on its own won't create the legion of eco-knights we may need, but we can hope that something from behind the screen may seed itself in its viewers. On that note, it is worth staying for the credit sequence, especially if you are lucky enough to watch this in its IMAX version - an embroidery of mushroom gills, flies' wings, jellyfish and the like in David Hockney brightness.

I watched this film on the morning of Good Friday. Faith and fantasy: how do you begin to speak about how the imagination helps us perceive both Christ's sufferings in his passion, and the hobgoblin that lives under the stairs? C.S. Lewis chose one route out by yoking his imagination to his faith when he wrote the Narnia chronicles, but in his theological books such as The Great Divorce, he draws on science fiction to create a more supple metaphor, rather than the monochromatic Aslan=Jesus relationship. Certainly the imagination does not perform at its best when it is ordered to do as it is told by the rational mind.

What is the position of the imagination then, which at its uncontrollable best transforms reality into something altogether bigger? Should these fantasies be left behind in childhood with talk of Father Christmas? Or does exposure to them educate a mind into understanding the existence of miracles? A religious dismissal of imaginative works runs the risk of closing oneself to the unforeseen workings of the Spirit. And though many works of fantasy allow for an overt Christian reading, equally there are others which do not allow for a moral to be mined from their deeps (Mervyn Peake's wild Gormenghast trilogy, for example) - rather the reader exalts in the exercise of the writer's imagination. At the least such works of fantasy remind us that the imagination is as divine a gift as the seahorse: not a bad starting point for any quest of understanding.

A Grammar of the Common Good: Speaking of Globalisation

400 years of the King James Bible