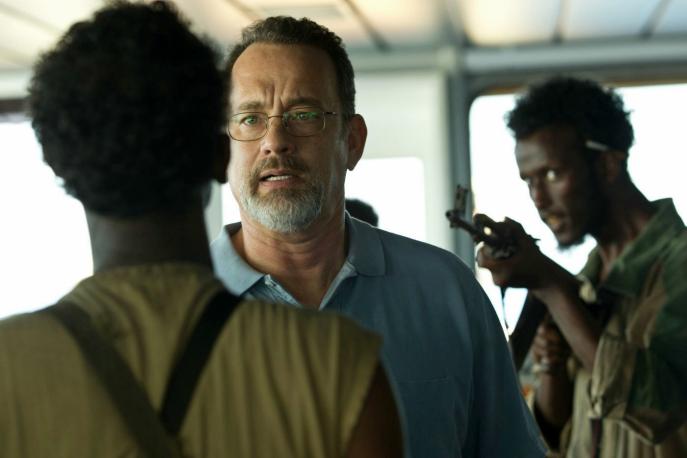 Paul Greengrass has always been a director who is comfortable exploring the boundaries between education and entertainment. His films are often white-knuckle rides of tension, which simultaneously challenge any viewer who expected nothing more than empty-headed popcorn fare. From Bloody Sunday onwards, Greengrass has built his reputation on quality, thoughtful films that trust the audience to have a brain.

His latest offering, Captain Phillips, is that rare thing – a film which grips you from the very first moments and doesn’t let go even when you are released to the end credits over 2 hours later. It is part action film, part thriller, part heroic adventure, and it always demands that the viewer sits on the edge of his or her seat.

Naturally, there is an extra edge to this story, given that it is based on true events. In April 2009, Richard Phillips was captaining the US-flagged cargo ship MV Maersk Alabama around the Horn of Africa when it was hijacked in international waters by Somali pirates. It is a story full of daring and conflict, which obviously makes great source material for a thrilling film. But extra layers are added by Greengrass’s distinctive style and Tom Hanks’s central powerhouse performance. The film becomes more than just goodies versus baddies on open water. In the wrong hands, Captain Phillips might have ended up like Pirates of the Caribbean without the costumes. But this film is so much more chilling than that. If you are looking for something to watch vacantly, be warned – Speed 2: Cruise Control with Somali pirates, this is not.

This is the least you might come to expect from a film which has received an Oscar Best Picture nomination. But there are three things that set this film apart from most others: firstly, Billy Ray’s script is taught and sparse, wasting little screentime with anything other than important information and conflict. Ray weaves a beautifully layered story that does not just focus on the Americans, but also delves into the home lives of the Somali pirates. The pirates do not just appear on screen as the bad guys savagely wreaking destruction; they have a back story, one that treats seriously their motivations and convictions, humanised most especially in the character of their leader, Muse (Barkhad Abdi, Oscar-nominated for his supporting role). This makes the tension more unbearable throughout the whole film, as things get progressively more complicated and out of hand for the pirates and for Captain Phillips.

The second impressive thing about this film is Greengrass’s visual flair and attention to detail. Stories at sea were made for his trademark handheld cameras and searching close ups. The pace of the editing helps the film zip along, allowing the audience to get caught up in the energy and confusion of a group of unarmed men at sea, and the pirates who hunt them down to ensure their big payday. The director’s attention to detail is remarkable. It plunges the viewer into the story and means there is not a moment of untrimmed fat in the film. This is as true for the depiction of the everyday mundanity of life at sea as it is for the complex military tactics once the US Navy SEALs get involved. The hardware and weaponry on display in the final third of this epic thriller would not look out of place in a Michael Bay film. But Greengrass keeps such control over proceedings that things never feel ramped up or over-exaggerated. There is unbearable tension and a logical progression – and knowing that this all actually happened sets the hearts pulsing even faster.

The final outstanding quality of this film is Tom Hanks. His portrayal of Phillips is one of the stand-out roles of his career, which is saying something. He did not undergo any massive physical changes, which the Oscars tend to love, nor is he playing an emotionally disturbed psychopath who eats up the screen. Hanks’s performance instead is measured, studied and tightly coiled. Hanks nails the methodical nature of a cargo ship captain, checking locks and keeping the crew on their toes as they sail through the most dangerous waters. There is a humanity to him that only comes out when he lets his guard down – speaking to wife, or in the briefest of moments when all hell is breaking loose around him. Otherwise he is professionalism personified. Phillips tries at all times to maintain calm and control, taking simple but important steps to lead his men even when he is separated from them on the ship and the pirates have taken over. When matters slide out of his hands still more, and it looks like all is doomed, Phillips still thinks methodically and searches always for ways to disarm his captors. When things have been so tightly wound for over two hours of screentime, a flood of emotion is bound to come, and the vulnerability and pure humble humanity that Hanks exhibits towards the end of the film is breathtaking. It takes bravery for an actor who has been the epitome of dignity throughout the film to let events finally take their toll. Hanks does this in a way that does not seem ham-fisted or over the top, but in a way that feels natural to this gripping story.

That both Hanks and Greengrass were overlooked in the Academy’s nominations in their own categories does not necessarily bode well for Captain Phillips’ chances of glory come 2 March. But the genius of this film is that it is so perfectly self-contained. It is a triumph of thrilling storytelling and chilling consequences. The small choices that people make play a vital role throughout this marvellous film. Some results are devastating – much like the final emotional impact of this must-see film.

Revolutionary: Who was Jesus? Why does he still matter?