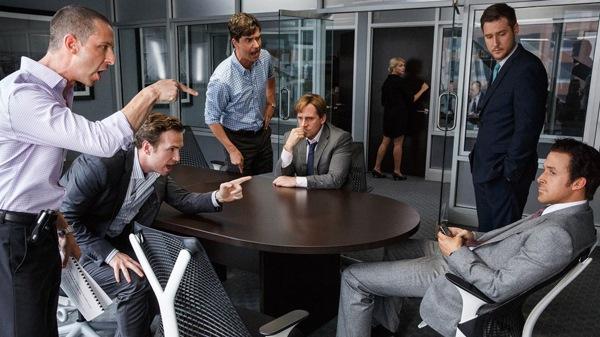 This is the story of the 2008 financial crisis and the handful of oddballs who saw it coming. Two parts documentary, one part comedy, it provides a window into the inner dealings of US high finance and aims to instruct as much as it entertains. While it may not push much beyond key terms like CDO and subprime mortgage, its way of going about it is a good time.

The film’s boldest appeal is its unconventional approach. Its hybridised, mockumentary-like style has an engaging, offbeat structure to match its bevy of offbeat characters. For example, the chic mainline banker, Jared Vennett (Ryan Gosling), frequently disengages from the drama for informative asides straight to camera, whether to introduce a mini-class in economics from a celebrity chef or an actress in a bubble bath, or merely to remind his audience that he is really too cool to be hanging around nerdy bankers. The film’s manner is consistently irreverent, in the best sense, without ever straying very far from message.

Dr Michael Burry (Christian Bale) embodies the ethos of the picture. He is the glass-eyed, barefoot, Metallica-listening medical-doctor-turned-hedge-fund-manager who first identifies a bubble rising in the US housing market. An eccentric who claims to know neither how to make a joke nor be sarcastic, he nevertheless provides comedic counterpoint to the flash Wall Street stereotype and is just hare-brained enough to be taken seriously. His early bet against the allegedly rock solid ‘foundation of the American economy’ arouses escalating anxiety among his employers and investors, to the extent that when he is not pounding death metal fillers on his basement drumset or reading Terry Pratchett novels he is regularly gulping heartburn medication.

Mark Baum (Steve Carell) is another of the zanies, a hyper-stressed, semi-independent investor who spent his childhood searching out inconsistencies in the Torah. He catches wind of the emerging crisis and launches a crusade which takes him to abandoned housing developments in Florida where strippers have multiple holdings, a securities conference in Las Vegas where he interrupts a speaker mid-speech, and a New York credit ratings office where he accuses them of fraud. His is the voice of moral indignation that gives the film its weight.

Other personalities include Rafe Spall as a food-loving optimist who works for Baum; up-and-comers Finn Wittrock and John Magaro as two young independents who also discover the bubble while investing out of their garage; and Brad Pitt as a paranoid ex-big banker who grows his own vegetables while awaiting the apocalypse. Real estate investment might be a lifeless topic, one imagines, if it were not for such colourful characters.

Which might suggest something profound. Chesterton once wrote that Dickens could be credited with more social reform than all the marchers, protesters and activists of his day, and all for a simple reason: he shared the joke of our common humanity. By locating the humour of the poor, the forgivable absurdity of the privileged and the baseline of familiar personhood behind every eccentricity, Chesterton suggests, Dickens was laughing at himself. And it was a laughter more arresting than a hundred criminal investigations.

Similarly, The Big Short succeeds in communicating its ponderous message, paradoxically, by not taking itself too seriously. Global financial collapse may be a big deal – Pitt’s character points out, for example, that every percentage point of increased unemployment means the death of forty thousand people – but humour, if Chesterton is correct, somehow represents something bigger. We listen because we are entertained, and somehow the significance stays with us.

But what if there is no growth?