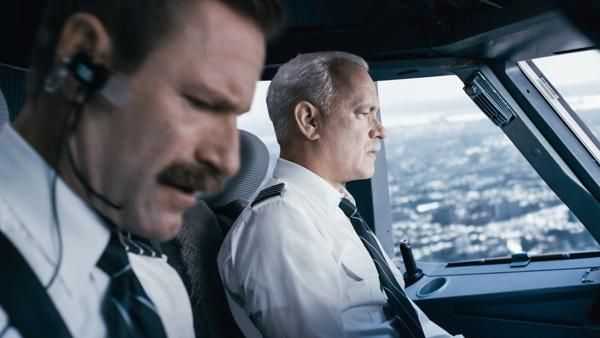 When pilot Chesley ‘Sully’ Sullenberger landed a passenger airliner on New York’s Hudson River nearly eight years ago, preserving the lives of all 155 passengers and crew, the world was astounded and praised his quick thinking and ingenuity. Most of us are unaware, however, that Captain Sullenberger was subjected to intense scrutiny by the National Transportation Safety Board (NTSB) as a result of his actions. Sully follows Captain Sullenberger (Hanks) and his first officer, Jeff Skiles (Eckhart), through the emergency landing of US Airways flight 1549, the subsequent investigation, their nightmares and their growing doubts.

Sully tells the story in a simple, straightforward way, which is very satisfying. It gives brief glimpses into Sully’s home life and into the unique and relatable lives of the passengers, lending a necessary extra touch of humanity to the story without ever losing its focus. Early on in the film, confronted by evidence from computer simulations that suggest his captain had unnecessarily endangered the lives of his passengers by landing on the river, First Officer Skiles says, ‘They’re playing Pac-Man; we were flying a plane full of human beings.’ That line could stand as the thesis statement for the entire film. Without denigrating the importance of the NTSB and their investigation, Sully focuses predominantly on the question of whether a computer simulation can accurately judge the validity of a decision taken by a human mind under pressure, without prior warning and conscious of the risk to himself and many others.

It also criticises our current tendency to treat science with an awe and a reverence which are undeserved, to accept early reports or fudged experiments as truth, without any understanding of the scientific method or any desire to delve further into the facts. We accept the results given by computers without asking whether the parameters set by their human programmers were valid. The story is told in such a way that viewers are confronted with mounting technical evidence that the ‘Miracle on the Hudson’ was unnecessary at the same time that they are becoming familiar with the events of the landing and the personal character and professionalism of Sully. With this tension held in balance, the film is brought to its climax, the final, public hearing on the case, and the unspoken question is offered: if the computers and the NTSB decide that Sully was negligent, will that change your opinion of him?

Sully himself is portrayed as an ordinary man and a conscientious worker. He has a passion for flying and he happens to be very good at his job, but there is no unusual ability or character trait that singles him out as a potential hero. Rather his hard work and long experience provided him with the necessary intuition to make a decision that saved 154 other human lives and made him a hero. While there will never be any shortage of films about people, both real and fictional, who dedicate their lives to a cause or possess extraordinary abilities, Sully is a lesson in down-to-earth heroism; it tells us that heroism is to be found in the quiet consistency of a job well done, a thought very much in line with the spirituality of St Josemaría Escrivá and his teachings on the sanctification of work. Just as there can be heroism in a diligent commitment to work, there is holiness in accepting one’s individual calling and using it to glorify God, allowing Him to work through our small, everyday activities. Understanding that will allow us to recognise the virtue exhibited by so many holy men and women, especially the modern saints whose entire life stories are open to our scrutiny and may seem less colourful than those of the saints of old. Sanctity can be found in the day-to-day living out of a Christian vocation, a habitual turning outward towards God and towards others that makes a person an instrument of God’s mercy.

Sully appears at first to be the story of one man, but in a show of true humility, Captain Sullenberger himself directs us away from thinking of the ‘Miracle on the Hudson’ as the remarkable feat of one man. When he landed on a river in New York in the middle of January, he may have saved their lives from an airplane crash, but he put his crew and passengers at risk of hypothermia. The people on US Airways flight 1549 owe their lives to the combined efforts of the captain, his crew, the ferry boat captains who came to their assistance, and the various emergency service personnel who responded with such promptness. In short, the ‘Miracle on the Hudson’ was possible because of the efforts of so many people who were conscientious in carrying out their duties in their individual professions.

Sully encourages us to re-evaluate our society’s dependency on computers and its resulting denigration of human capabilities. It also drives us to consider at a deeper level our understanding of what it means to be a hero, and it suggests to us that we all have the possibility of becoming heroes because the foundation of heroism is an attention to the simpler things in life and the building up of a good character. Heroes are ordinary people who respond to extraordinary situations with humanity.