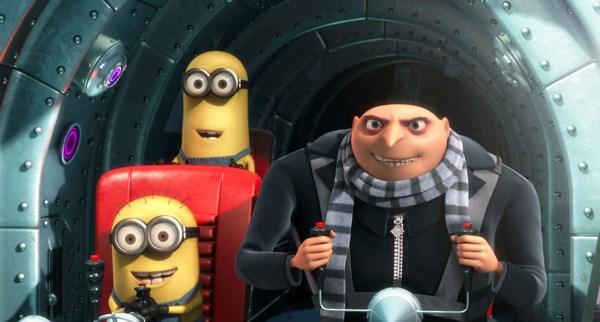 Blessed are the peacemakers, for they will be called children of God.

The Minions are dominating the box office at the moment, and the film in which we first met them has a lot to teach us about how to be peacemakers, says Megan Barzaq. St Augustine tells us that ‘the children of God are peacemakers’ – how do the children of Gru in Despicable Me help us to make sense of this idea?

The word ‘peacemakers’ generally brings to mind images that we are sadly accustomed to seeing on the news, of war-torn countries and politicians in conference trying to resolve their differences. So it may seem strange to associate a large-scale concept such as peace-making with an animated film, particularly one with a title as inward-looking as ‘Despicable Me’, but I assure you, the connections are there to be made.

As with so many good stories, we need to start with an introductory question: what does it mean to be a child of God, and why are peacemakers particularly worthy of that title?

Despicable Me can help us to answer both parts of that question. Three of its central characters are children – they are orphaned sisters with very different personalities, each of which illustrates a different aspect of childhood. We have the sensible one (Margot), the adventurous one (Edith) and the innocent one (Agnes). They are all desperate to escape the misery of Miss Hattie’s Home for Girls once and for all and they dream of being adopted by the ideal mother and father. They are yearning for that unconditional love of a parent, and the first thing that you might encourage children to reflect on when watching this film is how God loves us unconditionally. He loves and cherishes each one of us individually, with all of our flaws and in all the circumstances of our lives. You might ask young children to imagine how they would describe what it feels like to be loved by God the Father to Margot, Edith and Agnes, who long for loving parents.

Instead they are acquired by super-villain Gru to be pawns in his evil plan. While the two younger girls want to explore Gru’s creepy mansion and let their imaginations run wild, Margot is left to parent her sisters – and Gru! – by telling them what they should eat, how they should play, where they should sleep.  She comforts Agnes when she is scared, she scolds Edith for jumping in puddles and she leads them both while they are selling cookies. In the chaos and disorder that surround the girls, Margot is and always has been, by necessity, the source of parental wisdom. This kind of prudence and responsibility isn’t often associated with childhood, but perhaps it should be. Margot demonstrates an ability to respond to a situation without overthinking it, without coming up with a list of reasons and excuses not to do something, which is an all-too-common adult trait. And she shows how quick we are to learn in childhood, too. But she hasn’t lost her ability to embrace the usual joys of childhood: she still likes funfairs, sweets and playing with her sisters, and she even enjoys her bedtime story. This combination of wisdom and delight in the small things makes childhood seem like a pretty appealing state of life, doesn’t it? And to have a parent who loves us with truly unconditional love – who wouldn’t want to be a child of God?!

The Catechism of the Catholic Church (§1250) tells us that all of us are called to be children of God, so why is the title reserved here for the peacemakers? Maybe it’s to encourage us to think about peace-making in terms of those qualities that we associate with children; it helps us to think about peace-making as a fundamental attitude to life, rather than as a grand gesture. Those who aspire to peace orient themselves to the world in a certain way – they are non-judgmental, kind and compassionate and, importantly, this encourages others to behave likewise. Children are naturally blessed with these qualities and have the ability to bring them out in others, which is why Jesus encourages us later in Matthew’s Gospel to be like them. In peace-making, we are childlike both in our care for those around us and because we inspire that same behaviour in others, and so we are welcomed into the Father’s house with open arms.

Agnes is a good example of how childlike compassion inspires the same in others. In one scene, Margot has won an argument with Gru so the girls get to go to their regular dance class. Little Agnes, unfazed by Gru’s hostility, toddles up to him and offers him a ticket to the big dance recital that they have been rehearsing for. Not only is Gru momentarily softened, but the surrounding mums are all suddenly interested in this seemingly perfect dad.

Children are constantly told to ‘be good’, ‘be kind’, ‘treat others how you’d want to be treated yourself’. None of this is explicitly said in Despicable Me; instead, we see what happens when people don’t do these things, when they forsake peace-seeking behaviour to pursue their own interests. For example, when Gru abandons the girls, they get kidnapped – he recognises his resulting distress as the consequence of seeking personal gain rather than considering what is best for others.

We see in other ways how the girls help Gru to be his best self. When we see flashbacks of him as a child aspiring to go to the moon, sweet, innocent Gru – the opposite of his older self – is scolded by his mother and told that this is an impossible dream. From here, this hope-fuelled dream of his childhood becomes increasingly motivated by greed and a desire for revenge, as do all of his actions. Gru is certainly not a peacemaker – even though war is not high on his agenda – because he is always motivated by self-interest rather than love. The introduction of the girls reminds him of what is important in life and reminds us of how positive reinforcement (offered here by Margot) can feed the goodness of a person. A child teaching an adult? Yes it can happen, so try to listen to those that you thought you taught.

Much of Despicable Me’s success is down to the minions, little yellow creatures of indeterminable origin who, as their name suggests, are there to do Gru’s dirty work. But they, too, are peacemakers in their own way; they have a childish innocence about them that rubs off on other people. When Gru is about to set off on his villainous mission, one minion makes sure he doesn’t leave without his ticket for the girls’ recital. It’s just a small gesture, a mere suggestion of kindness, but one that plucks at the heartstrings of the viewer and, as we see later, Gru himself.

Peace-making does not need to be about solving global conflict or mediating high-pressure discussions; it can be about avoiding unnecessary quarrels and exhibiting love, no matter how small the scale on which that happens. Are we kind? Are we generous? Do we know when too much teasing is too much? As St Augustine of Hippo says: ‘Where there is no contention, there is perfect peace. And because nothing can contend against God, the children of God are peacemakers’.  We are all children of God, and if our response to the knowledge that we are loved unconditionally by God our Father is to embrace the joys of childhood then we will all, like children, spread compassion and kindness. That is how we become peacemakers.