Skip to main content
Photo by Eoin Gardiner at flickr.com 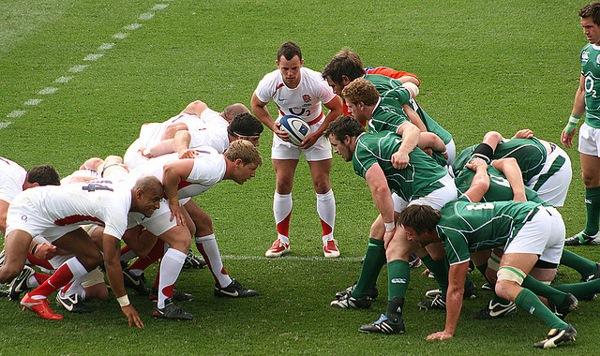 Rugby union fans counting down the hours until the Rugby World Cup gets underway on 18 September probably need no convincing of the value of sporting pursuits. However, you might be more inclined to join the poet James Kirkup in asking: ‘Is all this courage really necessary?’ If so, Daniel Kearney has some advice, with a little help from a 16th century martyr and a 21st century philosopher.

Watching grown men ‘roll each other,/ In the mud’, the poet James Kirkup declared that: ‘Sport is absurd’.[1] Many might share his view, particularly when the unseemly salaries of premiership footballers or the duplicity of drug abusers and cheats hit the headlines. But however absurd it might seem, the thought of living in a world without sport is, for me and many others, unthinkable. It is not merely a means of keeping fit and staying healthy; like great art, music and literature, so too sport feeds the soul. Like love it stirs our hearts and, like love, it can break them! Such is its allure and hold upon us.

Team sports in particular can gather us in solidarity and a shared purpose, counterbalancing some of the individualistic, self-serving tendencies fostered by contemporary society. The Yorkshire martyr, John Pibush, writing to the sixteenth century Jesuit Superior Henry Garnet, celebrated the value of sport when stressing the qualities of those who sought to work as priests on the perilous English Mission:

Those who purpose to come to this country and to work profitably therein must bring along with them vigorous souls and mortified bodies.  They must forego all pleasures and renounce every game but that of football, which is made up of pushes and kicks, and requires constant effort unless one would be trampled underfoot; and in this game they have to risk their lives to save souls.[2]

For Pibush, sport was an apt symbol of what it means to be a practising Christian. St Paul, as we know, fought the good fight, ran the race and rushed towards the finish line!

Sport sets in motion our faculties of attention, observation, analysis, order, judgement and evaluation. Without such qualities no Christian could possibly hope to win the ‘imperishable wreath’.[3] We need such attributes to be finely honed if we are to discern and live Gospel values in the midst of an increasingly secular and materialistic society that seems little inclined to recognise the Christian message. Sport at its best, like meditation, can prevent the world from filling our lives to such an extent that there is no place left to listen, to hear that small, still voice.

Philosopher David Papineau argues on his sports blog, More Important Than That, that the meaning of sport is not to be found in competition, rivalry or tribalism but in ‘the pure virtue of physical prowess’. Sport, he writes:

...forms a self-enclosed realm, isolated from the rest of life. (Perhaps this is one of the reasons why people find sport absorbing and relaxing.) But I see no reason to accord sport less importance on this account. The exercise of physical skills may not win you friends or influence the rest of the world. But that doesn’t mean it is not important and valuable in its own right.[4]

Kirkup may have dismissed the efforts of the rugby league players he observed as being ‘in vain’, but St Paul’s commendation of sporting discipline to the Corinthians[5] would suggest that he would rather join Papineau in celebrating the exercise of physical skills. During the Rugby World Cup, players and fans will have the opportunity to join this celebration of the safe, disciplined and driven pursuit of sporting ambition – it’s not so absurd after all.