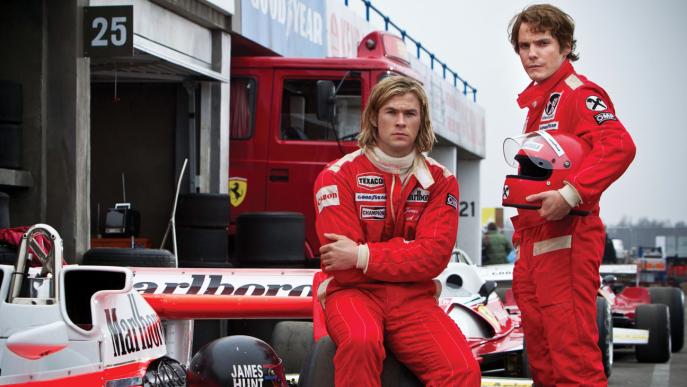 
Buckle up, snap down your visor and hang on tight for a world-class cinematic ride. Chris Hemsworth stars as James Hunt, Formula One racer and heartthrob libertine, who meets his match in rival driver and calculating misanthrope, Niki Lauda (Daniel Brühl). At first glance the two are opposites: Hunt is English, dashing, irresponsible and seldom seen without some shell of discarded indulgence lying near at hand; Lauda is Austrian, shrewd, disciplined and generally disliked, yet accomplished at politicking for what he wants. Inwardly, their ambition is the same: to win the 1976 Formula One World Championship – the film is based on a true story.

More than the thrillingly-shot race sequences, the movie’s interest resides in the spark and grind between these incompatible personalities as they race neck and neck, swapping victories en route to a rapidly approaching season finish line in Tokyo. The stakes are high and the tension shifts into consecutively higher gears as repeated mechanical failings jeopardise Hunt’s McLaren along with his shot at victory, and Lauda’s near-fatal Ferrari crash threatens to yank him out of the runnings altogether.

But the film is not all action and eye candy. Indeed, the drivers do not shrink from the hard fact that every year two from their ranks are carried away in body bags, and considerable discourse is devoted to the main characters’ grappling with this ineliminable element of risk. In other words, even the roar of twelve cylinder engines is never quite enough to drown out the scythe-rattling of leering death, and the result is an exhilarating and honest tale.

Hunt, for instance, introduces the theme of mortality within the first few minutes of the film, uttering his adrenaline-inspired philosophy that the closer one is to death, the more one feels alive. He courts death in more guises than one, most conspicuously in the haphazard playboy existence we witness in intimate detail. Later we hear from Lauda, who has resolved that a twenty percent mortality rate is just the price to be paid for taking part in his chosen business. Each is alike in his willingness to face his demise, whether in fifty years or in an untimely fifty laps, and his choice to live dangerously in the pursuit of what he loves. For such existential honesty – if for few other virtues – these men might be called modern day heroes, perhaps even modern day prophets, as they shimmy into streamlined death machines like enacted parables. For who, in an air-conditioned luxury car society, does not need reminding occasionally of this difficult truth: that much of life happens amidst repetition and daily go-round, yes; but it can also be snatched away in an instant. This may come at a moment you do not expect, with the squeal of tyres and a fireball of horror or glory, or the silence of a heart attack.

These daredevils might, in a very specific sense, be called secular saints; they who fight courageously in a kind of spiritual warfare, battling inches and minutes, space and time, for a dream set ultimately not so much against the limits of creation as against the limit of death. The clock is ticking and, as the opening voice-over intones, these are men desperate to make their mark. But there is more to the movie’s message, I think, than a 168 miles-per-hour translation of carpe diem.

At a crucial moment, in a beautiful paradox, the inveterately-opposed Hunt and Lauda recognise that it can be a blessing to have an enemy. It is precisely the unflagging opposition of their rivalry, they acknowledge, that has forced them to dig deeper, to stretch further, to pant and perspire towards perfection. Counter-intuitively, perhaps, death might do the same. Rush accomplishes something profound – and lives up to its name – when, with a cold thrill, it suggests that the prospect of dying can become something higher and better than simply life’s enemy: it can become its rival. If it goads us into a purer and stream-lined living, more reckless loving, faster forgiving, and a Hades-defying abandonment to a dream, death might in the end even come close to resembling a friend.